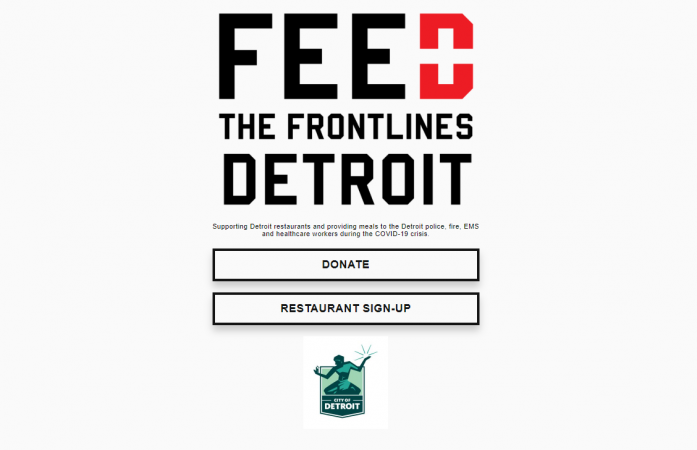 Detroit Mayor Mike Duggan held a press conference Monday afternoon to discuss the process of returning to work amid COVID-19, as well as the accomplishments from the Feed the Frontlines Program. Joining the Mayor was Chief Public Health Officer Denise Fair and Quiana ‘Que’ Broden, owner of Cooking with Que, as well as Police Commander Constance Slappey and Jamar Peterson, a medic in the Detroit Fire Department.

Duggan began the press conference by looking at the six-phase plan put out by Michigan Governor Gretchen Whitmer and stated that at the moment, the city is in stage three, which means numbers are flattening and additional businesses may begin returning to work in the coming weeks. With Detroit being in this stage, it also means that at the present moment, construction, manufacturing, landscaping, real estate, and other types of outdoor work have begun returning to work with extra safety precaution measures.

So, here’s the plan: we’re going to evaluate where the state and each of its regions are across 6 phases of the pandemic:

Duggan also stated that Detroit is close to entering the next phase, phase four, which will see more types of businesses returning to work in the coming weeks.

“We are very close to moving from phase three to four in the City of Detroit, and I expect it to happen in the next few weeks. What that means is, businesses that are closed now will be allowed to open,” shared Duggan. “So what does that mean? Well, the governor describes them as other retail with limits, offices if teleworking isn’t practical.”

Some of these businesses described by Duggan include shoe stores, bookstores, etc. The main point made by the Mayor when speaking about these businesses returning to work is the fact that as businesses start to reopen, masks will need to be worn and that wearing one will become “second nature.”

Duggan remained hopeful that Detroit will continue on its path of returning to work, and that if current testing efforts continue, Detroit will be able to flatten the curve.

“I have said from the beginning, and I’m going to keep saying, the City of Detroit is going to have the highest standards of medical safety for bringing our employers back,” added Duggan. “I know my friend the governor has a whole plan that she calls safer at home. But if you look at this, if you’re a city of Detroit employee, we’re proving that you can be safer at work if it’s done right. We’re going to keep testing this every single week. Because we’re going to make sure that this doesn’t start to slip out.”

Duggan and those taking part also talked briefly about the success of the city’s Feed the Frontlines program. This moment allowed Quiana Broden to comment on her work, while Commander Slappey expressed positive sentiments for the program’s ability to feed first responders.

“You’d never think as a business owner, that when you open up a business, you’re going to have to shut down or a pandemic is going to happen. The one thing that I did know is that our job was to provide healthy food to the community, and I didn’t want to stop doing that, I wanted to make sure that we got healthy food to the community by any means necessary,” shared Quiana Broden, Executive Chef of CookingWithQue, when talking about their involvement in the Feed the Front Lines Program.

“Even though there was a  pandemic the first thought I had was how do we get healthy foods to our community members so that we can all Eat to Live? Because ultimately that’s what we want to do. And when Feed the Frontlines showed up and they wanted us to assist, it was like a layup, I wanted to do whatever I could by any means necessary,” continued, Broden.

At the moment, the program has provided $20,000 meals to first responders that include hospital workers, firefighters, EMT’s and police officers. According to Duggan, the program has also taken a total of $400,000 from 126 different restaurants and donors to help provide for the program.

Expressing thanks from the Detroit Police Department, Commander Slappey stated, “On behalf of Chief Craig, and the Detroit police department, we just want to say thank you. Thank you. Thank you so very much for the feed the frontline initiative. The foods we received, were always individually packaged for us. We always had between two to three entree choices, and oh my god, the food was absolutely delicious.”

The Feed the Frontlines Program is still ongoing, and those interested may donate or learn more here.

As the question of returning to work remains on the minds of many, Mayor Duggan will hold press conferences multiple times a week to discuss the city’s progress and efforts to continue flattening the curve. Catch up on the latest press conference here through the City of Detroit’s Facebook page.