Putting Nature at the Start of the Redevelopment Process 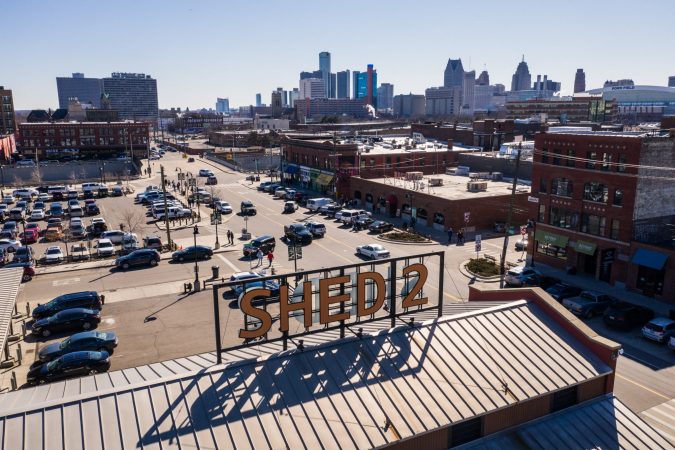 In any built environment, with growth and development comes the great challenge, responsibility, and opportunity to incorporate sustainability. One aspect of sustainability that’s critically important in Detroit is stormwater management.

Like many aging cities, Detroit’s infrastructure is in need of extensive upgrades to withstand increasingly frequent heavy storms that cause surface flooding and sewer overflows.

As we think about mature and critically important areas in the heart of the city with expansive impervious parking lot coverage, Eastern Market comes to mind.

Opened in 1891 the Market currently sits on 43 acres of land approximately one-mile northeast of downtown. It is the largest historic public market district in the United States, hosting over 175 vendors on any given Saturday, and 2 million+ visitors per year. 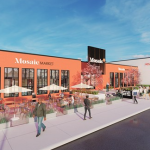 And it certainly isn’t stopping there. There are plans for substantial expansion over the next two years alone, to the tune of the $33 million Mosaic Food Hall to be constructed inside the 104,000-square-foot former Detroit Water and Sewerage Department at the north end of Eastern Market, a 75-acre Food Innovation Zone and more. The upcoming expansion will involve new development and existing building renovation.

Which makes this an opportune time to implement stormwater management systems.

So, the question becomes, how to integrate this infrastructure into both new development and renovations as the expansion takes place?

Taking a step back, Eastern Market Partnership, the Detroit Economic Growth Corporation, the City of Detroit Planning and Development Department, Detroit Water and Sewage Department, The Nature Conservancy and Michael Van Valkenburgh Associates (MVVA) along with residents and the community at large have been working together since 2018 to develop a comprehensive Neighborhood Framework and Stormwater Management Plan.

This Framework encompasses an estimated area of 1.1 square miles that includes Eastern Market and the surrounding Greater Eastern Market residential neighborhoods and the intent is threefold; to create jobs for Detroiters; improve the quality of life; and keep the authenticity and function of the market.

The expansion will bring new jobs to the Market District, more healthy food options for people in nearby neighborhoods, and vitality and growth to the whole district. Eastern Market has one of the largest footprints of any public market in the country – and we have the space and the means to go bigger.

As part of this Framework plan, The Nature Conservancy began working with Eastern Market to manage stormwater.

They began by looking at several innovative approaches, such as putting nature at the beginning of the redevelopment process, rather than the end and using nature to solve infrastructure challenges as well as enhance the community. 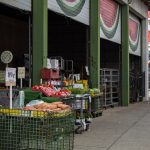 In the place of a more traditional development paradigm, where parcel-by-parcel green stormwater features are installed by individuals as the need arises, the Eastern Market masterplan will integrate natural infrastructure as development and expansion take place. This ensures that the Eastern Market district continues to thrive as it always has, while also ensuring that nature and people thrive, too.

Says Carmody, “Throughout our expansion, The Conservancy is helping us as we identify future buildout plans and repurpose urban land for industrial and commercial use to build in stormwater management systems as we go.”

GSI is an innovative, cost-effective approach to stormwater management.

Further, it provides habitat for wildlife and green spaces for recreation and beautifies neighborhoods. What may appear as a nice new garden could also be managing and filtering stormwater runoff every time it rains. 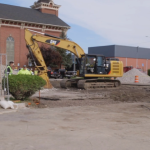 A great example of this is the “parking lot” project that took place at the Sacred Heart Catholic Church which sits in the Eastern Market District. The Eastern Market and TNC partnership had identified it as a good candidate for implementing GSI to manage stormwater runoff and got to work with the church fully onboard.

“We piloted this conversion of a parking lot to retain stormwater at Sacred Heart Church in the Market District that resulted in the reduction of stormwater runoff and a signification reduction in the church’s water bills.”

The Neighborhood Framework calls for beautiful, publicly accessible natural spaces to be incorporated into the redevelopment footprint of new buildings constructed in the Greater Eastern Market. This will involve an expansive, multi-acre network of greenways that manage stormwater.

So ultimately, nature is driving the Eastern Market design in a way that not only solves problems with stormwater, but that preserves the authentic and diverse fabric of the unique Eastern Market district.