Everybody Vs COVID-19, a Digital Unity Festival, Over 20 Musical Acts

Check in May 29-30, the Effort Comes as a Way to Continue the Fight Against Coronavirus and to Also Promote the 2020 Census 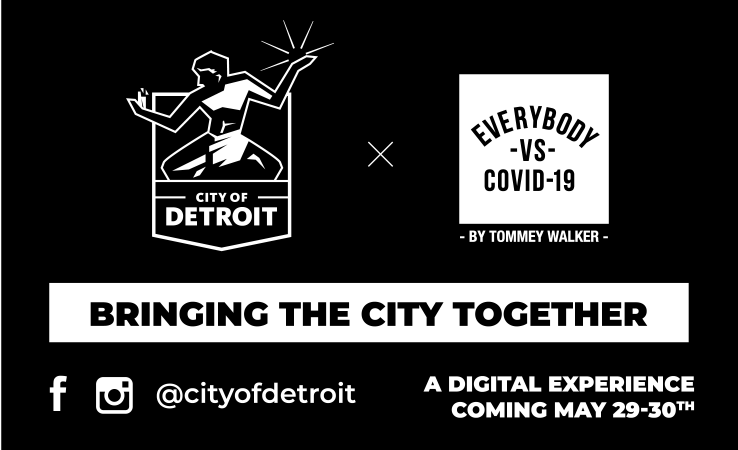 The City of Detroit is partnering with the fashion label Detroit Vs. Everybody to hold the Everybody Vs. COVID-19 Digital Unity Festival on May 29 – 30. The Unity Festival will be held with the goal of building continual awareness for the COVID-19 Pandemic, as well as promoting the importance of the 2020 Census.

The Unity Festival will feature musical guests such as Big Sean, Mayer Hawthorne, Sada Baby, DJ D Nice, La Britney, Gmac Cash, and other local Detroit music talent. The musical performances will be live-streamed directly on the City of Detroit Facebook, YouTube, and Instagram pages starting at 7 pm each day and ending around 10 pm.

City and community leaders are encouraging Detroiters to take part in the digital unity festival as a way of doing their part to stay safe and have a little fun while social distancing.

“Detroiters citywide have been doing their part to stay safe and practice social distancing,” shared Eric Thomas, Chief Storyteller for the City of Detroit, in a press release. “In the spirit of Detroit, we are encouraging continued collaboration by celebrating our city and culture for two important and pressing causes. Advocating for safety and awareness about COVID-19 and getting Detroiters to participate in the Census to ensure that we have all the resources we need going forward and in case we ever experience anything like this again.”

“This is a time for Detroiters to stand in unity and stand tall, to show our neighbors near and far what Detroit love looks like—from the contributing artists who exemplify our city’s soul, to the difference-makers who will listen in and do their part to keep our city strong,” added Tonya Allen, president & CEO of The Skillman Foundation to the city’s press release. “We’re proud to be part of Everybody Vs. COVID-19 and believe our fellow Detroiters will be too.”

The festival will also aim to boost Detroit’s 2020 Census response rate, which currently sits at 46 percent, compared to a 66 percent rate of response for the State of Michigan. As noted in the press release put out by the city, Detroit loses an estimated $5,500 per year in federal funding for every person not counted in the Census. To boost the number of responses, there will be links to the 2020 Census form shared between musical acts during the livestream.

The festival comes in part from donations by the Skillman Foundation, Community Foundation for Southeast Michigan, The Ford Foundation, The Kresge Foundation, Ralph C. Wilson Jr. Foundation, and The Knight Foundation. On top of being shown on the city’s social media channels, the Unity Festival will also be broadcasted on city cable channels.

6 Activities You Can Still Do in Detroit This Summer

Ever Think Coffee Grinds Could End Up in Your Car Interior?

Want to Know About the August Primaries? They are Different Than the November General Election

A Community Founded Around Coffee

Trevor Pawl to Head Office of Future Mobility and Electrification