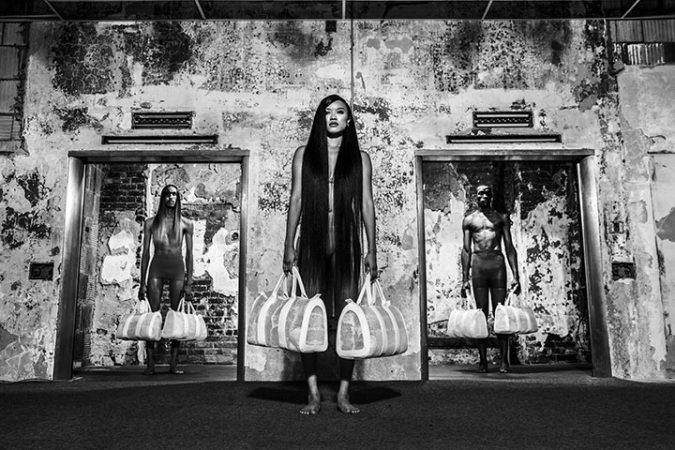 There is such a feeling, walking into a studio that has been brought to life by its artist. For Lisa Spindler’s private art studio in downtown Detroit, life seems to show in the exposed ceilings and original, industrial-style walls. The ambiance of the interior brings forth an attraction not only with the eye of an artist but with the spirit of an artist as well. This spirit is shared by Spindler and the artist paired with the studio during this year’s Month of Design, Cristin Richard.

Richard, with her exhibit, “Excess Baggage,” was one of the winners of the Design in the City competition, funded by Gucci Changemakers. Each winning design is to be featured in a different Detroit location for the month of September. She knew, when she was chosen, that she wanted to be featured within Spindler’s studio. Its defined textures, and the exposed feeling it puts forth was something Richard felt would enhance her exhibit’s impact. Spindler agreed to this and emphasized the importance of artists helping other artists, “Every artist needs support,” she says.

The photos showcasing Richard’s “Excess Baggage” were taken by Spindler as a way to enhance the exhibit’s impact. Spindler, who was born and raised in Detroit and has had 12 different studios downtown throughout her life, was enthused to help represent Richard’s exhibit. Spindler began her photographic journey in high school, where she learned to see things in a unique way, “I always tried to find something positive or beautiful in the things I’ve been given or seen,” she says.

Spindler’s photos range from organic, black and white figurative imagery, to robust architectural industrial imagery. “I’ve tried to look at what was around me and create my work from my environment,” she says. It seems there is movement inside much of her work, as the images that are captured show the essence behind them. Her portraits, as seen by the photos she produced for “Excess Baggage,” are lively, full of texture, yet surreal.

Richard approaches the idea of art and design in a different manner. “Excess Baggage” was formed from questions and 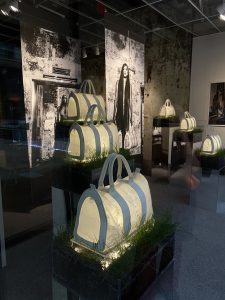 research as a way to reinforce the importance of inner dialogue. She speaks of going to the Detroit Institute of Arts and seeing an Inuit parka made out of seal intestines. The parka caused a whirl of unsettlement inside her. To her it seemed gruesome to use intestines for a garment. Upon further research, however, she found it to be a sort of memento to the deceased animal. The Inuit people, out of respect for the animal, found ways to use each and every part of an animal, not letting any of it go to waste. She found this unusual, “Especially in our society where everything is so throw away,” she says.

The idea of using the unusable sparked an idea in Richard to display an artistic assessment of modern-day waste culture. She was able to connect with a butcher in Eastern Market and procure hog intestines, which are often used for sausage casings. She experimented with this material by making clothing out of it. She describes the clothing as ghostly, like skin being shed from the body. The drive behind these clothing pieces morphed from an idea of sustainability to an assessment of shedding one’s identity.

From there came the idea for “Excess Baggage.” The process took three years, from understanding and creating a usable animal byproduct material, to the making of the 10 bags that are now displayed.

“The bags themselves are a metaphor for the bags we carry through life,” she says. “We all have some baggage we are dealing with. This baggage shouldn’t necessarily be something that weighs us down in life, but it should be something that proves our strength and our resilience.” 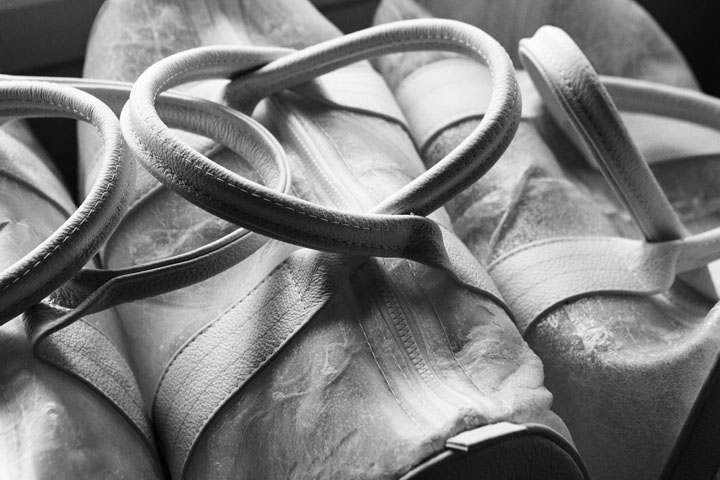 Similarly to Spindler, Richard speaks to beauty through art, in a more sustainable fashion, “What do we have around us that we can use and transform into something really beautiful?” she asks. This project is something she wants every viewer to take their own interpretation of, but at the heart she hopes to inspire people to ask questions, “I don’t want to force-feed a message, though I want people to be curious and develop their own thoughts about it,” she says. “I want people to start questioning themselves and their ideas.”