Explore Saturdays – and All Days – in Detroit with Jeanette Pierce

Jeanette Pierce, Founder of City Institute Shares Her Not to Miss Detroit Favorites 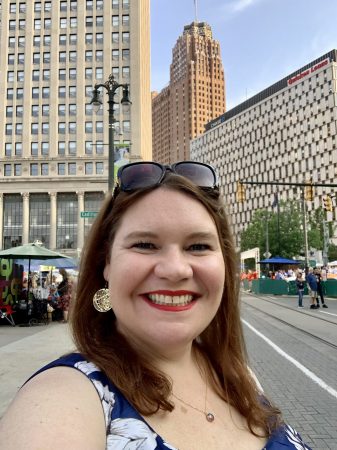 As a lifelong city resident and Founder of the City Institute, Jeanette Pierce is arguably one of the most knowledgeable individuals when it comes to the history and current innovation, happenings, and great places in Detroit. This mother of triplets grew up in the Morningside neighborhood of the city, earned a bachelor’s of arts degree in communication from Aquinas College, and hasn’t stopped since. In addition to being an owner of non-profits, she serves on the Board of Michigan Municipal League Foundation and the Detroit Historical Society, was honored by Crain’s Detroit Business as one of the Top Forty under 40, by DBusiness Magazine as a Thirty in their 30’s, was awarded the Leadership Detroit Moving the Needle Award and the Shining Light Future Leader Award from the Detroit Free Press as well as receiving many other recognitions and awards. Needless to say, she knows Detroit!

Here, she shares her favorites around town…

DII: An acquaintance is coming into town for one night and asks where they should have dinner and a drink. What do you recommend?

JP: Baobab Fare is my favorite restaurant in Detroit right now. The food is delicious and the owners, Mamba and Nadia, are amazing! Followed by great cocktails at Willow and then music at either Bert’s for Blues, Spot Lite for Techno/dancing, or Cadieux Cafe for all kinds of live music.

For drinks you’ll find me at Spot Lite at least once a week. It’s very much a Detroit-spot with diverse interesting people, great music, and that “old Detroit” vibe that so many of us miss.

JP: Honestly, growing up on the Eastside we never went to either. Then in 2006, I did a tour for a travel writer and he wanted to do a taste test so we did it and we both came down on American being better. 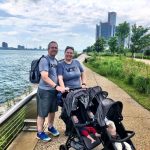 JEANETTE WITH HER FAMILY ON THE RIVERWALK

DII: You find yourself with a free Saturday afternoon and want to spend it roaming around the city – what places will you hit?

JP: This is literally something my husband and I would do all the time before the triplets were born. We called it Explore Saturdays. Some of my favorite jaunts are

DII: Your favorite public transit and where do you take it to?

JP: I walked to work for 15 years so I guess I’d say walking is my favorite form of transit:) During the pandemic, it was especially great to get out and still be a part of the city even though we were all apart. I walked 3-5 miles every day with my triplet stroller from Lafayette Park. I loved the new Dennis Archer Greenway and walking through Eastern Market looking at the murals then heading downtown and even walking to Michigan Central and back.

I used to ride the 53 DDOT bus the most especially before Uber/Lyft. It’s the quickest way to get up and down Woodward. Then there’s the FAST #261 to the airport that most folks don’t know about.

DII: Best place to get a cup of coffee? 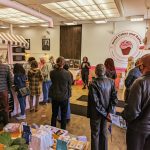 DII: Where do you park downtown to get to what you need to do most?

JP: I almost always walk downtown but the Z garage is pretty cool as it’s a parking garage and art gallery. It’s very Detroit in that you literally drive through the gallery to see the murals on each floor.

DII: Where do you go to learn more about the city?

JP: Honestly I’m always learning from the Detroiters I know. Especially our tour guides who all have different interests and experiences and we’re always sharing with each other. One of my favorite folks to learn from is our guide Glen Hendricks who at 71 has lived through so much of the history that we talk about on our tours and learning journeys. We created a whole tour around his experiences called Black History by the People that Lived It.

And of course, Jamon Jordan of BlackScroll Network and Tours who is the Official Historian of the City of Detroit always has information that most other folks don’t.

DII: What’s your favorite new discovery in the city over the past year?

JP: Chroma Detroit is one of my new favorite additions to the city. It has a great public space/art gallery on the first floor and the most amazing views from its 9th floor event space and it brought us the best mural in Detroit, Sydney James’ Girl with the D Earring.

DII: What’s the most under-rated spot that deserves more visibility?

JP: I know I’ve already shared a lot of places (that’s literally what I do for a living so it’s hard to choose just one) but this answer was easy: It’s the East Warren Corridor between Bedford and Guilford. Not only is it where I grew up but the work they’re doing over there is amazing and most folks don’t know about it at all. They’ve had more than 20 businesses open up in that stretch in the last 5 years and almost all of them are residents of the neighborhood. 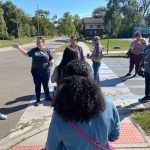 From Zab Cultural Collective and Detroit Pepper Co, and Be Her to the weekly E. Warren Farmers Market it’s an area full of great people and places. To help get the word out we have a free E. Warren Walking Tour coming up on July 30th.

DII: What makes a Detroiter?

JP: I think the one thing that brings longtime Detroiters and (most) newer Detroiters together is a desire to have a positive impact on their city, to work towards a better city for all Detroiters.

DII: What do you treasure most about the city?

JP: The people and the sense of community we have. We have all the big city amenities of large cities but you can still know your neighbors and be a part of something bigger than yourself. To sum it up:  Detroit is Big Enough to Matter in the World but small enough for you to matter in it and I wouldn’t live anywhere else.