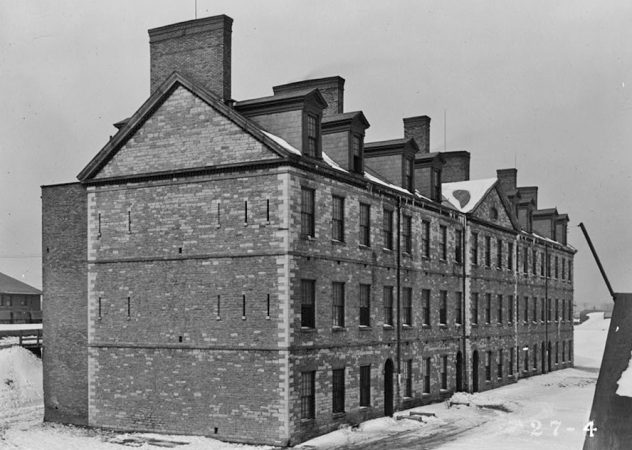 The first week of March saw the Detroit City Council vote to approve a zoning change that will designate the development of Detroit’s historic Fort Wayne as a regional park allowing for the adaptive use of its buildings as a historical park setting. With this change, many of Fort Wayne’s abandoned buildings will undergo rehabilitation and adaptive use, with some seeing use, potentially, for the first time in decades.

Amid this time of change, let’s take a look at Fort Wayne’s history and the surrounding region it calls home.

Named after General Anthony Wayne, Fort Wayne is actually the third fort to be located along the Detroit River. While Michigan’s indigenous population had long lived along the Detroit River’s shores, the advent of colonization brought drastic changes in the early 1700s and the first fort established by European powers was the French Fort Pontchartrain du Detroit, which stood until 1760 near present-day Hart Plaza. 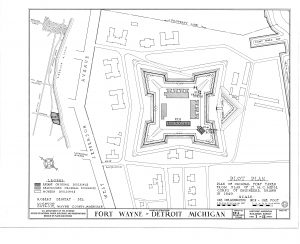 AN ORIGINAL MAP OF FORT WAYNE

Surrendering control to the British, they soon constructed a second fort named constructed the second fort, Fort Lernoult, located near present-day Fort and Shelby streets. The British remained in control until 1796 when the United States assumed control over the site and renamed the fortification Fort Shelby. Remained manned until the end of the War of 1812, Fort Shelby fell into a period of despair, being purchased and later demolished by the city of Detroit in 1826.

In the 1840s, the land was surveyed and a parcel near the narrowest stretch of the Detroit River was chosen to become the site of Fort Wayne. While the site may have seemed an empty plot of land at the time, present-day excavation found that use of the land dated back to 1000 A.D, with close to 19 indigenous burial mounds being present in the immediate area.

When the construction of Fort Wayne began in 1842, cedar-revetted earthen walls were used as part of the original fortifications. Based on designs developed by 17th-century French military engineer Sebastian Vaubanas, the Fort was built as a bastioned rectangle and remained as was until 1863, when its designs were updated to include birch and concrete.

Manned by the United States Army from its construction until 1972, the early years of Fort Wayne’s use were relatively peaceful given the lack of hostility with Britain following the War of 1812. It’s thought that the fort may have been used as one of the last stops on the Underground Railroad, given a small ferry to Canada operated by Irish farmers who lived on land next to the forts demilune.

In 1861, however, Fort Wayne was again built up as a military structure given the advent of the Civil War and the fear of an invasion from Canada given British sympathy to the Confederacy. For the entirety of the war, it served as a center for troops and a recovery area for veterans returning wounded front the front. 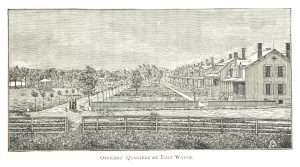 Following the Civil War, Fort Wayne remained a garrison post until 1920, with regiments stopping through before being rotated to the Western Territories. In 1875 and 1884, additional land was annexed for the Fort, while its guardhouse also housed the first telephone in Southwest Detroit at the time.

During the First World War, cars, trucks, and spare parts for the military were housed in the structure, a practice that continued into the Second World War. During the post-WWI Red Scare, citizens accused of being communist were detained in the Fort before facing trial, while during the Great Depression, homeless families also sought shelter in the fort and Italian prisoners of war were housed in the facility during the North African Campaign of WWII.

Following the war’s end in 1945, plans were made to close the fort for good and in 1948, the City of Detroit’s Historical Commission was given control of the fort and original barracks for operation as a military museum. Housing displaced peoples for the last time during the 1967 uprising in Detroit, the remainder of Fort Wayne was turned over to the city of Detroit in 1976.

Historic battle reenactments are hosted on the site, while spring and fall flea markets, concerts, and other events also utilize the space. The remaining Indigenous burial mounds are preserved on the site, while the Tuskegee Airmen National Historical Museum also calls Fort Wayne home.

Yet, while still preserved, much of the older buildings remain unused, with at least 23 historic buildings remaining vacant. With the latest move for rehabilitation being approved, Fort Wayne seems to be entering yet another chapter of its existence.