To Say George Plimpton Was the Worst Professional Football Player is an Understatement. But He Never Gave Up on the Dream 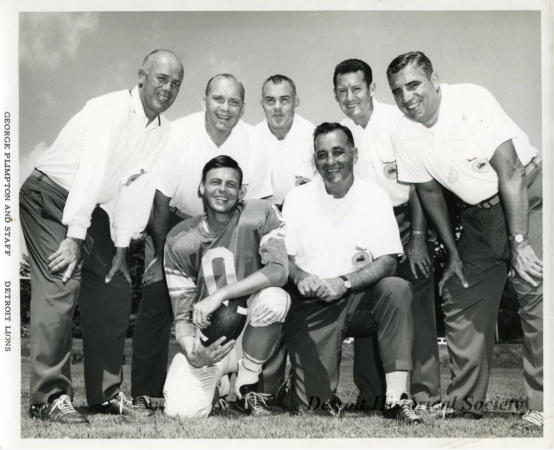 George Plimpton was a professional amateur. You might recognize his work from the time he blew up half a Long Island park working as a fireworks technician. Or maybe when he was punched in the face by professional boxer Archie Moore. Aside from his writing, his entire career was defined by showing how difficult it is to do amazing feats of athleticism in the fields of Football, Baseball, and beyond. Especially when you’re an average Joe like – well, like George Plimpton.

But as a friend of America’s Camelot family, the Kennedys, and as both a Harvard and Cambridge University graduate, Plimpton was somewhat special. Well-liked in his circle of socialite acquaintances, George seemed to take on everything in life like an adventure, according to an interview with Robert Kennedy Jr.

But, back in 1963, Plimpton was at the end of his ropes. He was looking desperately for a National Football League team that would sign his dream of becoming a quarterback. Having no real athletic experience outside of his Harvard University days, he was a hard-sell for most teams. He pitched a Major League Baseball game before tiring himself out and collapsing on the pitcher’s mound.

Plimpton’s goal was to throw one pass for an NFL game. That’s all. He hopped from team manager to team manager looking for that lucky break that could define a lanky kid’s football career. First the New York Giants. Then the New York Jets, then the Baltimore Colts. Until someone suggested that most teams were just too serious about their game. He simply wasn’t the right fit.

As the date for the ’63 preseason practice was fast approaching, one of the team managers suggested he try the Detroit Lions. Among the National teams, the Lions didn’t have such a serious streak to their franchise. So, head coach George Wilson took him in for the preseason practices.

At that time, preseason meant staying at Cranbrook in Bloomfield Hills, Michigan. Players would live in the dorms and eat, sleep and play in a small space and as an overcrowded team. It was in those dorms that Plimpton got to know each player. He was hazed by the veterans of the team, went out for team weekends to the bars around Metro-Detroit, and watched as some of the most desperate prospects got cut from the roster.

Practice was brutal for a 160lbs man. Part of his goal was to try every position on the team, understanding how the entire sport worked. But throughout the time he interrupted exercises and usually was just left to stand by and watch.

As the season approached and the first game started making the players nervous, Plimpton was working with everyone he could to guarantee his professional football debut. But when he finally sat on the bench and put on his helmet, the commissioner of the league cut Plimpton’s chance to throw a pass. He never got to throw a pass in a professional game.

In the 1966 book Paper Lion, Plimpton wrote all about that disappointment. But throughout the story, he recounts the arduous journey of all football players, whether they’re veterans hostile to the threat of someone cutting their name from the roster, or a rookie prospect who never got to perform in the National League. George Plimpton got to see all of it.