Already Launched in Other Cities, the All Electric Vehicles Will Cart Riders Around Detroit for No Fee Whatsoever 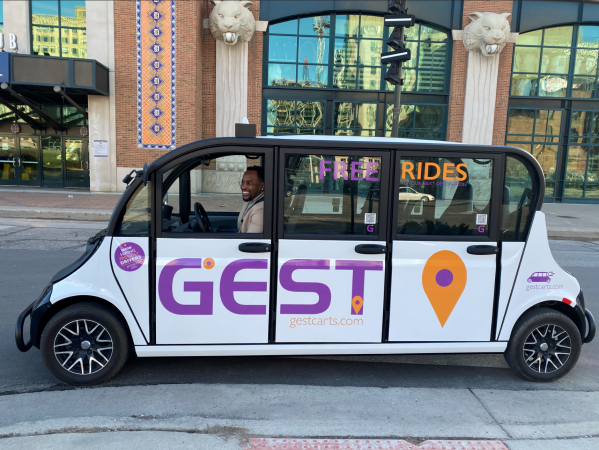 Opening Day will see a new service for Detroiters, as a free transportation method aims to create a safe, fun method of getting around Detroit. GEST Carts, an all-electric weather-proof cart service, launches in Detroit during the Detroit Tigers opening day, April 1.

GEST — which stands for Green Easy Safe Transportation — was first launched in Cincinnati before moving into Chicago. First seeing the service in Ohio, Detroiter Damon Dickens realized the service would be perfect for the Motor City and worked to establish a service in Detroit alongside his wife, Kaia.

“I saw the actual franchise in Cincinnati and a light bulb went off and I said, ‘Wow, this will work in our in downtown, in Detroit,'” shared Dickens while discussing bringing GEST to the city.

What sets GEST apart from other transportations is a few factors, mainly in that riders are chared nothing for the service — as advertisements pay the way. Another factor is that the carts arent meant to be just a way of getting around. They’re a form of entertainment. Something guests can rent for a few hours to cruise and enjoy the downtown area.

It’s really of the aspect that you’re going to just be cruising, added Dickens. You’re going back to the old cruising days of downtown and just taking in the sights without having to worry about actually driving. You can sit back, relax, listen to your music and just take in the sights to see downtown because there’s so much change going on.

With both Dickens and his wife Kaia being native Detroiters, the sense of change and commitment to their community inspired them to become a part of GEST. Hoping to contribute to the growth taking place in Detroit, the duo is excited for the future of the cart service in Detroit.”

On the topic of jobs, future plans will see GEST expand more into Detroit, with Dickens wanting to hire 20-30 people that range from drivers to mechanics. He would also like to see the service expand, branching off up Woodward into communities like Ferndale and Birmingham, as well as Ann Arbor.

With April 1 being the first day of operation to the public, GEST will have measures in place to combat the ongoing Pandemic. With being open-air already helping, carts will also be cleaned before and after use, while masks are required to enter the vehicle.

Their hours of operation for opening day are 10 am-6 pm, after which normal hours of operation will be 5 – 11 PM, running Thursday through Sunday. Rides may be hailed through the app, but those interested in extended rental cruises may call to reserve a cart.