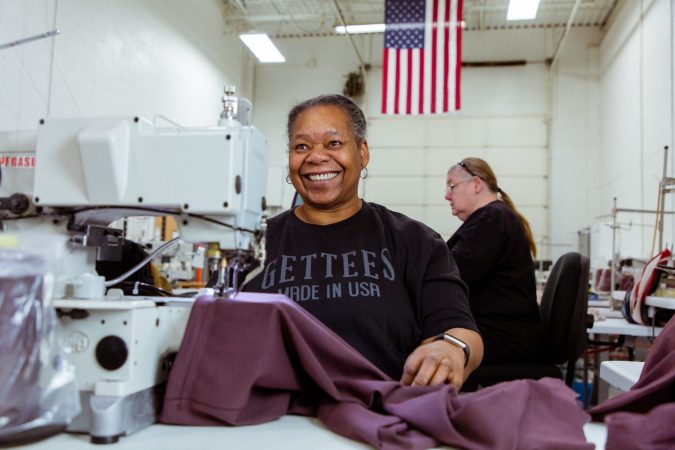 The former location of Mootown Ice Cream Shoppe in Eastern Market is now the new home of the clothing brand GETTEES new flagship storefront, bringing a unique history of innovation to the market area. Ringing in the future with an opening ceremony that included local food and drinks, as well as giveaways, the brand is looking to utilize the storefront to better inform it’s customers about its method of producing finer quality T-shirts and hoodies.

What makes the GETTEES brand unique is the fact that its products are entirely produced in Metro Detroit, employing local seamstresses, utilizing garments made in the U.S. A different outlook in the era of fast fashion, the idea for GETTEES came to be after the founder, Mathew Hunt, began researching the way production works in the garment industry following a news-worthy factory incident in Bangladesh.

The incident had Hunt questioning the way we make our clothing, examing the ethical practices, he came to the conclusion that things had to be done differently.

“There was a factory collapse in Bangladesh, and a lot of it was about gaining consumer trust after that,” said Hunt. “So I’m seeing these sweatshops, but I’m also seeing sewing machines and fabric cutting machines, and it kind of sparks the idea of doing things differently. Manufacturing clothing in Michigan, doing things ourselves, doing it in a way that really invests in the people making the clothing. ” 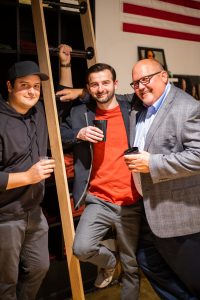 GETTEES FOUNDER, MAT HUNT, (LEFT) WITH GUESTS DURING THE OPENING OF THE FLAGSHIP STORE. PHOTO BY GETTEES

Following some insight from his father and friends, Hunt began the challenging process of opening the GETTEES manufacturing plant in Sterling Heights, which involved trying to acquire American manufactured garments, something that isn’t easy to come by in Michigan. But, after some brainstorming, some YouTube video tutorials, and a period of brainstorming, the brand had assembled a team to bring locally produced fashion directly to the people of Metro Detroit.

“Our intention was, keep it under the radar until we figure out the manufacturing,” said Hunt. “It wasn’t really until a year ago that we hired some interns and staff to help us push the brand and get the name out there. We wanted to be in our hometown first, it was very much about connecting with the local people around us.”

It’s GETTEES ability to connect with its customers about the needs they want to be met with their clothing that genuinely sets the brand apart from the competition. This is entirely possible since GETTEES controls the design of its products, as well as the process, allowing things to change faster if customers are unhappy about a certain aspect of their shirt or hoodie.

“The way most fashion brands are set up is they’re not the factory, they’re not as close to their customers, and they don’t always understand the complexity of the product they’re producing,” said Hunt. “With us, we prewash everything when you buy a shirt, it’s going to stay the same fit as when you bought it. It’s small details like this that we can really maximize, but when you add them all up, people can see the difference.”

THE FUTURE TO COME

The decision to move to it’s new Eastern Market location came through a familiar connection, as Hunt is related to the family that owns Devries and Co. 1887, and they were able to assist the brand in moving to the Market. Beyond this significance, Hunt also noted Eastern Market’s history and clientele as two reasons for moving to the area.

“My family has a history of going to the Market, we see how crowded it gets here during the holiday season especially, and it’s a very historic Detroit district that I think our brand fits well into,” he said. “We got the spot we wanted, and we’re ready to go.”

With plans to eventually move it’s Sterling Heights-based factory to Detroit, this new storefront is just the beginning of things to come. With plans to expand it’s current line up while promoting its message, the future of GETTEES is bright in Detroit.

When speaking of what is to come, Hunt says, “We want to make high-quality American essentials, we’re going to be adding new t-shirts, different fabrics, and patches. Really our goal is to take your t-shirts, hoodies, sweatshirts, high-quality stuff that fills up the majority of your closet, and to make them in Michigan out of U.S. materials.”