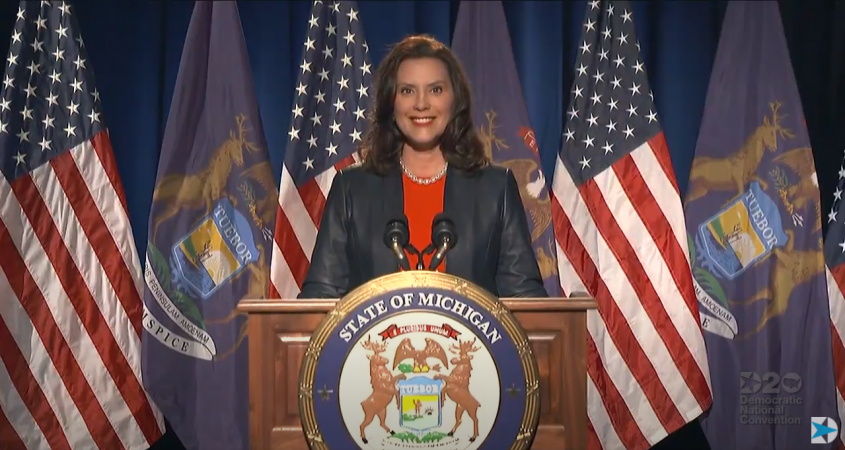 The 2020 Democratic National Convention moved online this year amid the Coronavirus pandemic, becoming a four-day ensemble featuring a mire of speakers across both party isles. Headlining alongside the likes of First Lady Michelle Obama and Sen. Bernie Sanders, Michigan Governor Gretchen Whitmer delivered an address from the UAW Local 652 union hall in Lansing.

Whitmer’s speech comes after she partook in a preview interview to discuss sexist and racist attacks on Kamala Harris this morning.

“Hello, America. I’m governor Gretchen Whitmer, or as Donald Trump calls me, that woman from Michigan” stated Whitmer in her prepared speech to those watching the convention.

Speaking of the ongoing Coronavirus Pandemic and the Obama legacy of working with Autoworkers, Whitmer shared, “Autoworkers in this union, and across our state could have lost their jobs, if not for Barack Obama, and Joe Biden. In 2009, the Obama Biden administration inherited the worst economic crisis since the Great Depression, the auto industry, on the brink of collapse. A million jobs at stake. But President Obama and Vice President Biden didn’t waste time blaming anyone else or shirking their responsibility.”

“When you know, just a few months ago, as our nation began battling COVID-19 auto workers across Michigan sprang into action. They started making protective equipment for doctors and nurses on the frontlines,” continued Whitmer. “Let me break it down, President Obama and Vice President Biden saved these autoworker’s livelihoods; then, these workers did their part to save American lives. That’s the story of this great nation, action begets action. Progress begets progress, and when we work together, we can accomplish anything. After all, democracy is a team sport.”

Whitmer expressed strong support for the Democratic Nominee throughout her live convention speech while calling for Americans to vote. Using the State of Michigan’s pandemic response as an example, she also urged all watching to come together to overcome COVID-19.

“Just imagine if we had a national strategy. So everyone who needs a test gets one for free. So everyone has access to a safe vaccine. So our kids and educators have the resources they need to safely get back to school with Joe Biden and Kamala Harris in the White House, we will. Joe Biden and Kamala Harris will lead by example. It’ll be science, not politics or ego that will drive their decisions,” added Whitmer.

Whitmer ended her convention speech by bringing up the story fo a young girl from Detroit, sharing, “So many of these essential workers have lost their lives to COVID. Nearly 1000 health care workers, more than 170,000 people across America, including a five-year-old girl named Skyler from Detroit, whose mom is a police officer and dad is a firefighter. Generation after generation, our nation has been defined by what we do, or what we fail to do so. For Skyler for her parents and in the memory of all those we’ve lost, let us act, let us heal as one nation. Let us find strength to do the work.”

The first day of the live-streamed convention can be watched here and the convention will continue live every night until Thursday, August 20.