What do Happiness and Politics Have to do with One Another? 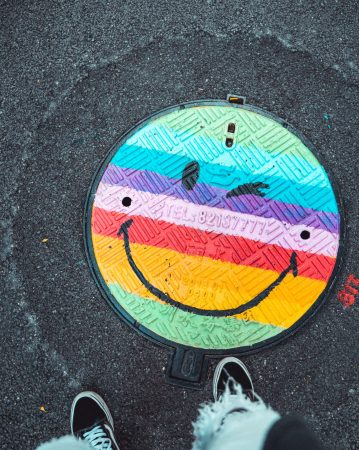 Imagine sitting in your favorite park. It’s a nice day, not too hot. Large cumulonimbus clouds roll lazily over occasionally shading you along with others enjoying the day. Most sounds contribute to a peaceful atmosphere with the exception of the non-invasive buzz from a nearby children’s birthday party. You casually observe the excitement as they play games, eat cake and celebrate their friend while looked after by loving parents. This is you feeling happy.

When we look to describe happiness, we find meaning in words that explain the children’s dislocation of worry and fear, their unconscious sense of security and support, or their disposition to appreciate and connect with the world around them.

Alternatively, we may seek to describe it by the common denominator of these feelings and our own subtly different experiences of joy, whether that be an empathetic joy that comes from such observations or more personal experiences such as our wedding day or a pleasant day off.

But maybe specific examinations of joy inappropriately emphasize individual experiences which would degrade when not supported by certain social structures. Happiness is a topic we can address from many different perspectives, through psychology, sociology, or even philosophy.

Different relationships to the concept, investigated through the focus of different schools of thought, make it hard to perceive in a specific and tangible way. Wayne State Psychology Professor and researcher Tim Bogg says that “happiness is definitely many things” and as much as the average person has struggled to define it, so too have researchers.

So why is happiness important to think about? In the face of its many dimensions, one might be inclined to dismiss it from important conversations on account of its inconsistency. However, some, such as Malaysian-Australian economist Yew-kwang Ng argue that it’s important to incorporate happiness into the metrics of society we control.

Ng is most known for his contribution to the study of welfare economics and writes from the philosophy that “public policy should be about enhancing happiness or the welfare of the people, now and in the future.” He continues, posing the question, “if public policy reduces or is neutral with regard to happiness, why do we go through the trouble of designing and implementing all kinds of policies?”

The idea that policy, devoid of consideration for its relationship to personal happiness is dispensable, inherently endorses the notion that happiness is a primary motivator for human behavior or at least a fundamental human pursuit.

With subscription to this concept, happiness may be seen as a critical element in an ultimate vision for the intention of specific policies. The big picture perspective is critical in a municipality like Detroit which has the authority to create ordinances and operates under institutions such as the Home Rule Act which allows an independent government to authorize charters and residents to structure government as they see fit. In a municipality with that degree of authority and autonomy, the big picture perspective has gravity as these policies significantly affect residents’ lives.

The need for this type of approach in Detroit has been recognized and addressed in various ways over the years. In 1998 the Community Reinvestment Strategy Plan preceded the Master Plan of Policies which was adopted in 2009. In 2012 Detroit Future City released the Detroit Strategic Framework. Additionally, The City Charter is regularly rewritten and put to vote.

But if we are to install the concept of happiness in the conversations which mold our society, we must first ask, what is it, and what do people need in order to achieve it?

Researchers often look to global studies for indicators. The annually released, UN sponsored, World Happiness Report is often cited, drawing much attention to the Nordic countries which have dominated the number one spot since its first release in 2012. Finland has been named the happiest country on earth for the last four years running.

While explaining the high ranking, researchers point to progressive social institutions and statistics that may cooperate with happiness such as its exceptional public healthcare and education systems, remarkably low crime rate, and labor rights.

However, Wayne State Sociology Professor and Finland native Jukka Savolainen argues that there might be something else behind the high rankings. The report is based on the results of a Gallup poll which asks its audience to imagine a ladder where their best possible life is a 10 and the worst is zero. They are then asked to rate their lives by that scale. 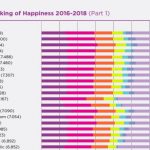 Savolainen proposes that the idea of determining happiness by the metric of expectation presents an unnoticed cultural bias. In an article published in Slate Magazine he writes, “In these societies, the imaginary 10-step ladder is not so tall, the first rung is pretty high up, and the distance between the steps is relatively short.” This is because the culture institutes a belief that it doesn’t get better than what they already have, that they have met their expectations for a good life even if it doesn’t elicit an emotional joy. This might explain why  Finland has such a high suicide rate with numbers comparable to the U.S.

Cultural differences in the way we perceive happiness can throw a wrench in any attempt to find variables that promote it as can individual differences. Bogg says that part of the solution to finding an unambiguous understanding is to “move away from using the term ‘happiness’ and shift to ‘well-being’ in order to better represent the range of emotions, perceptions, and meanings that might contribute to some ideal level of experience and functioning.”

Savolainen’s argument, when examined a la carte, seems to lead one to the logic that the progressive policies of Finnish society do little to promote a happy life. But Bogg contends that social support is still vital to the equation. He says although the relationship between material resources and life satisfaction is weaker at higher income levels, (as one might expect to see in Finland) “at lower income levels, there is an appreciable increase in life satisfaction as one’s income increases. So, to the extent material resources, such as reliable housing, healthcare, childcare, and education remain tenuous or out of reach for someone, then life satisfaction will likely be somewhat lower compared to someone for whom these needs are consistently met.”

Bogg says that when considering policy, one could make a strong argument for providing those material resources. Beyond the discussion of social support, his research suggests that “having individual goals, working toward them, and achieving them contributes to well-being. By contrast, feelings of low control in one’s life, not being able to pursue valued goals, or feeling repeatedly blocked from pursuing goals is generally associated with lower well-being.”

having individual goals, working toward them, and achieving them contributes to well-being. By contrast, feelings of low control in one’s life, not being able to pursue valued goals, or feeling repeatedly blocked from pursuing goals is generally associated with lower well-being. 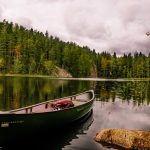 IT IS OFTEN SPECULATED THAT FINLAND’S HIGH HAPPINESS RANKING IS CONNECTED TO ITS LANDSCAPE.

Interestingly, this perception is consistent with the original intention of the phrase, “life liberty and the pursuit of happiness.” The author, Thomas Jefferson, wrote that “it is neither wealth nor splendor but tranquility and occupation which give you happiness.”

It suggests that one pursues well-being through personal validation and fulfillment or, rather, as an auxiliary to having specific personal goals and achieving them. This opposes the idea that we pursue our goals with well-being itself being the motivator, that well-being comes from the material reward of our achievements, not the fact we achieved them.

The practice of identifying happiness or well-being from a singular angle is imperfect. Bogg gives the example of the correlation between perceived health and well-being. If one sees their life to be flourishing with healthy behavior, there is a better likelihood that they have higher life satisfaction.

Bogg points to smoking. He says that “from a public health perspective, the answer is clear. Smoking has an unambiguous societal burden and cessation should be the goal.” People know that smoking is an unhealthy behavior, therefore it should have a negative effect on well-being.

However, Bogg explains that to see the full picture, behavior must be understood in the broader context of the person. “If smoking helps someone focus on a valued goal, which contributes to their well-being, then how should the ‘cost’ or ‘benefit’ of smoking be determined?”

The psychological perspective, he says, puts “greater emphasis on understanding how smoking fits into the self-regulation of the individual, including pursuing goals and managing negative emotions, in addition to the psychoactive addictive nature of nicotine.” When you examine specific components of society in different contexts, it’s not always easy to put one label on how they are associated with well-being.

Well-being is a deeply personal experience that in some ways, cannot be reduced so that one definition applies to everyone. However, if we are to value it as an essential goal of our society, then it only makes sense that we indoctrinate it into our political philosophy on a local and national level. Perhaps we can start where the research suggests, and use well-being as a motivator to provide the social equality and basic resources that Detroiters deserve.