Everyone Deserves a Sandwich: How Forgotten Harvest Helps Feed Detroiters in Need

The Non-Profit Works to Help the Houseless Community with Rescued Food, Needed Now More than Ever 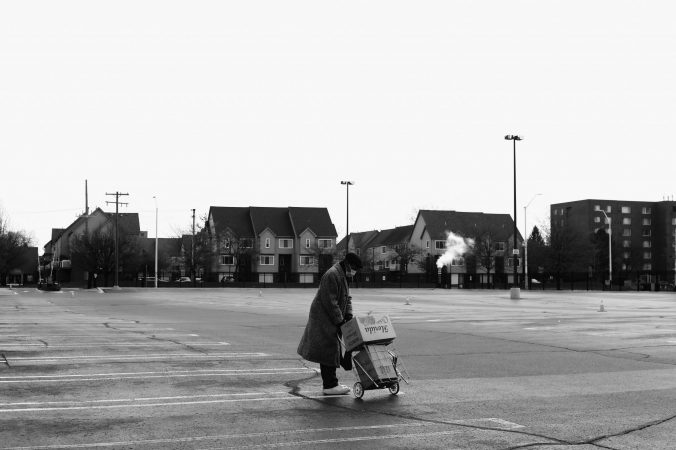 Rice and beans for dinner, plain oatmeal, and a glass of freshly mixed powdered milk for breakfast. Some of us know what it is like to be on this diet, to live paycheck to paycheck, or to see $.89 in our bank account. But even with experiences like these, we may not understand what it is to be houseless. We may not know what a hit to our pride it is to ask a neighbor to heat up our dollar store tv dinners because you live in a minivan and minivans don’t have microwaves.

We have heard the statement over and over, “Detroit is back,” yet the ability to confirm that reflects one’s financial standing. According to the Detroit Food Policy Councils’ 2017 Detroit Food Metrics Report, 48% of Detroiters are food insecure. This means there is a lack of access, either financially or physically, to healthy and sustainable food.

For those who commute into the city and see only high-end restaurants or retailers like H&M, or one of the country’s most successful Whole Foods, this number may not seem to add up. “Downtown is flourishing,” you may say.

Along with food insecurity comes a contradictory high percentage of food waste. It is estimated, according to USDA’s Economic Research Service, that between 30-40% of food is wasted in the United States. This is attributed to food thrown away that is past its expiration date or damaged in stores, or uneaten in homes and restaurants. However, there are organizations that work to limit this wasteful behavior by recovering unwanted food from big box stores and redistributing it to those in need. 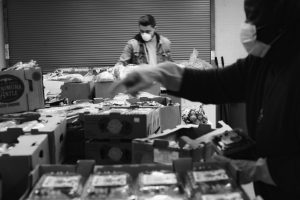 Forgotten Harvest is a food rescue organization that works in tandem with big box stores such as Kroger, Target, Costco, etc. Food that is damaged, like a squashed box of macaroni, or is near its expiration date is set aside to be picked up by Forgotten Harvest. When obtained, it is taken back to their warehouse, sorted, and then put into family-sized packages or boxes. The next day those boxes are transported to food distribution sites around the city.

Food insecurity is usually caused by a few things. One is simply a lack of finances to purchase food. Another may be an individual who is located within a food desert. This equates to no grocery stores within a few mile radii, leaving those without transportation or access to public transport in the unhealthy, but nearby, arms of gas station junk food. This means that organizations like Forgotten Harvest must choose their locations well and have a firm understanding of where the needs are in order to meet them.

Though Forgotten Harvest requires no qualifications for those who receive food, questions are asked upon arrival.  Questions like, what are your food insecurities? How many are in your household? Name? Zip code? These questions are used to pinpoint specific areas in need. Director of marketing and communications at Forgotten Harvest, Chris Ivey speaks to the need for this information, “We want to be in the neighborhoods where people need help.” For example, if multiple people report from one zip code, Forgotten Harvest knows where to expand to next.

Forgotten Harvest is helpful in so many ways, but distribution is no perfect science. Food that is gathered can only last so long, and those receiving the food can only eat so much. This means that even with this food being rescued from all the Krogers and Costcos in the area, some is still going to go to waste. The addressing of this wasted food is where individuals like Kenny Karpov come in.

Karpov has worked with Forgotten Harvest for most of this year and is passionate about helping those less fortunate than himself. To him, this work means getting to know people on an individual basis. “We need to learn why they are out there and listen to their story,” he says. He also looks to those termed “homeless” and tries to rephrase it, better defining their situation with the word “houseless.” To him, this means those without brick and mortar, without a living room and a bedroom, but aren’t homeless. They do have a place they consider home–a minivan, a park bench, a certain section of sidewalk.

While working with Forgotten Harvest, Karpov met and teamed up with another Forgotten Harvest worker, Diana. Together they take leftover food that isn’t distributed by Forgotten Harvest and prepare sandwiches and meals, which they serve in biodegradable packaging, for houseless people around the city. He smiles, miming the smear of spicy brown mustard on ciabatta bread he often rescues from Panera, “They deserve healthy, upscale meals,” he says. 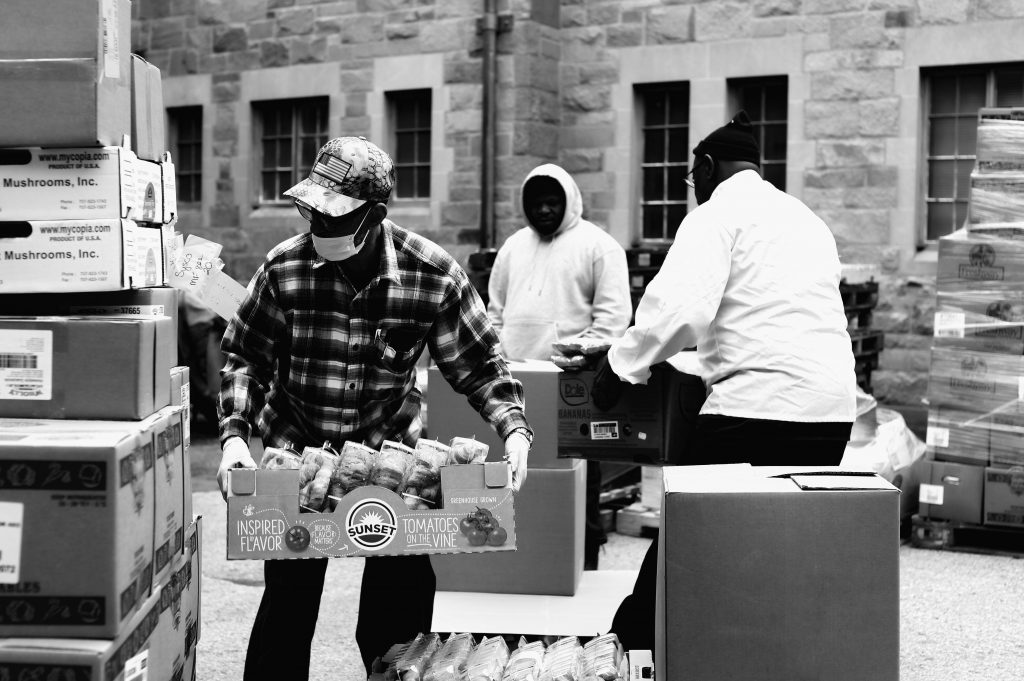 After the sandwiches are prepared and paired with fresh fruit and vegetables in Karpov’s kitchen, the two drive around Detroit and distribute the food. They often make sure to visit most of the same individuals in order to keep up with pre-established relationships.

Forgotten Harvest does a lot for this community. Over the last three months, 400,000 people were fed through the organization, according to Ivey. And those like Karpov who are focused on individuals, their stories, and their needs, are so useful. But how do we move forward? In a city of two Detroits, how can lasting change be brought on a level deeper than food? 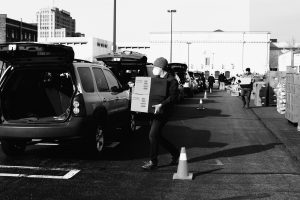 It is important to understand that redistributing food to the community isn’t enough. Food cannot be used as shelter in the cold months, nor will it, in most cases anyway, change someone’s status from houseless to home-owning between bites. Also, as gentrification spreads, and more people move and travel to Detroit, let’s understand that many long-term Detroit residents are forced out of their homes because they simply cannot afford the skyrocketing prices.

We must keep these things in mind when we volunteer: What else can I add into my day to day to help those in need? Or when we vote: What candidates are paying attention to and making an effort to stop the housing crisis in Detroit? Or even when we shop: What family-owned, local restaurants or stores can I support that are invested in the community and those who live here?

In terms of organizations rescuing food, there can be improvement. “They have to do better,” Karpov says. He offers up the idea to add an official “third tier” to food rescue. This would mean an organization doing what he and Diana do: rescue the leftover rescued food. Karpov continues, “but we have to do better too.” We, as individuals have a say in our own waste and in our own interactions with houseless people.

For each of us doing something better may mean doubling your chili recipe and taking some to the houseless person who stays in the alley behind a home. It may mean taking the extra oranges you know you won’t eat to a food pantry. Maybe it means having a conversation with the person who sits outside your laundromat whenever you take your laundry. It may even mean volunteering at a place like Forgotten Harvest.