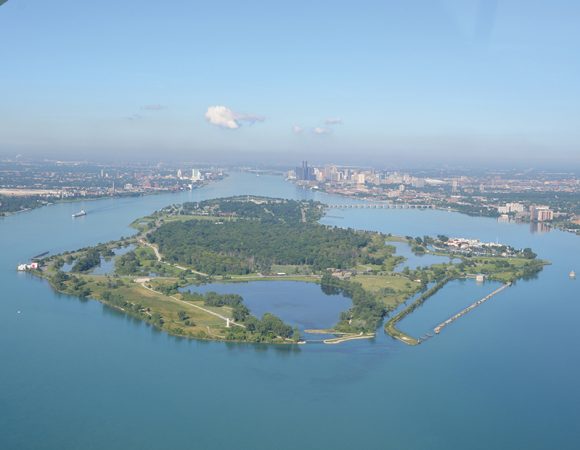 If you’ve been to Belle Isle in the last year or so you’ve likely noticed a lot of construction that’s being done on the island. While this may be a small frustration for visitors – bikers or those trying to get around the island on foot or n a vehicle – the restoration that’s being done is extremely important for all forms of living things that call Belle Isle their home – now and into the future.

Let’s take a deeper dive so that we can understand the what’s and the whys, and even some things we can consider adopting in our own yards and lives.

According to Greg Norwood, Ecologist for the Michigan State Parks, the goal of the work on Belle Isle is to restore and keep as much of the island’s biodiversity as possible.

Namely, humans share the island as visitors with the wildlife, birds, vegetation, fish, insects, and more that live and grow there year-round. Over time, we humans have come in and built roads buildings and other obstructions that have, in lots of ways, disrupted the natural flow of things on the island.

This work is being done to restore it – while keeping it beautiful and usable for people visiting the island as well.

We want the future of all living things on Belle Isle to be able to thrive to their fullest extent. We also want future generations of people to witness and enjoy it, study it and learn from the wildlife and birds and vegetation. This involves restoring the island’s hydrology into a state that’s more natural than it is today.

WHAT DOES RESTORING THE ISLANDS HYDROLOGY MEAN AND INVOLVE?

Hydrology is the study of the distribution and movement of water both on and below the Earth’s surface, as well as the impact of human activity on water availability and conditions. Restoring the hydrology to its natural state on the island will assist with the preservation of trees, wildlife, fish, vegetation, and more now, and into the future.

“The natural flow of water has become blocked by various roads and other elements that have been constructed for well over 100 years, so we are working to return some of the island’s hydrology to its original state,” says Norwood.

One main initiative in doing so is the removal of roads that are a barrier to the natural movement of water across the island. The unnatural flow of water has stressed the trees and other vegetation in the area.

Oakway, Tanglewood, Wildwood and others are being removed and then grated to reflect the natural hydrology. This is subtle and specific work. If you’ve been to the island in the spring, you may have seen flooding across much of the island Natural flooding areas will still occur – but it will flood in a way that is more consistent with the duration and extent prior to some of the infrastructure that is being removed.

A second initiative is connecting Lake Okonoka on the Southeast side of the island hydrologically to the Blue Heron Lagoon, which then ultimately connects to the Detroit River. Opening the waterways is critical in allowing fish to thrive, and it restores natural nutrient and sediment flow as well. It also creates an outlet for flood waters. All of this work is also important for biodiversity, including turtles, frogs, salamanders, mussels, and much more.

Another area that’s being restored is the former golf course, which impeded the land’s natural hydrology. Some of the golf course infrastructures is being removed and ditches are being adjusted to restore the natural conveyance of water.

During restoration work there is inevitably ground disturbance, so a big component of this work is to repair that. Work has been done to identify dozens of species of various plants, trees, and shrubs that are native to the island and revegetate the disturbed grounds. Norwood says, “It’s important to preserve the plant genetic diversity on the island and we’ve spent a great deal of time collecting seeds and acorns from the island. Some are being grown into plugs and tree saplings, while others will be broadcasted onto the bare earth of the former road beds and ditches.”

During restoration, the team has also put practices in place to minimize the impact to the nesting bald eagles. A 600-foot buffer was created around the nest in which no work at all is done during the nesting season, which is January 1 through August 31.

Regarding the eagles, Norwood says

They are a charismatic megafauna that many people can see while visiting the island. I think more importantly is that they are one of the many species whose wild populations in the Detroit River corridor have recovered and are now thriving as the environment improves for them. This is great news for visitors, too, who are enjoying these same environmental improvements. However, much more can be done.

SOMETHING TO CONSIDER IN OUR OWN ENVIRONMENTS?

This idea of restoring or creating the healthiest and best habitat for animals, birds, and vegetation can be applied right in our own yards.

Rewilding” is a trend that allows areas of land to return to a natural state, restoring ecosystems and encouraging biodiversity. The idea is, if enough people and organizations rewild their backyards and community plots, it may help mitigate climate change and biodiversity loss. Less human intervention allows nature to find its own balance, helps wildlife thrive, and lessens your yard maintenance.

When you consider that lawnmowers and leaf blowers emit harmful greenhouse gasses and that restoring your habitat attracts pollinators and generates more habitable homes for wildlife, allowing your outdoor space to become more of a natural ecosystem has its appeal.

So perhaps we take a page from the work that’s being done on  Belle Isle and apply it to our own yards. Food for thought!

And remember, as Norwood reminds us “Most of the work that’s being done now isn’t necessarily for us – for our generation – but its our responsibility to make sure we take care of our earth and environment for all living things in the future.”