The Future of Mobility With Mobility Lab Detroit’s Chris Thomas 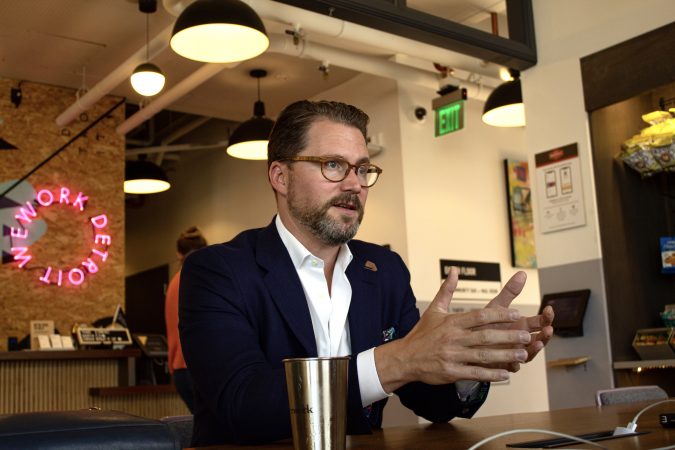 In this second installment of our “In Talks” Panel Series in partnership with Morgan Stanley we discuss challenges facing Detroit as it grows and evolves. Panelists include leaders, innovators, experts, and startups, with whom we will provoke and entice new directions on financial and business topics pertaining to Detroit. The purpose of “In Talks” is to expand an entrepreneurial mindset as many are looking for the right tools for both their professional and personal wealth management needs.

Chris Thomas might be mad. And that’s a good thing.

I meet the co-founder of the Detroit Mobility Lab on the 8th floor of WeWork’s Capitol Park location. He’s wearing a suit. He’s always wearing a suit. Today I catch a flash of color from the inside of his coat.

The lining is a silk superhero pattern. He was inspired by his older son. Which sounds banal enough until you start talking to Chris, and suddenly it becomes everything—metaphor, talisman. 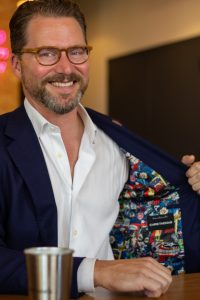 Our conversation on Mobility starts to take us into space—”which sounds far left field,” he assures me, “because it is.”

Chris Thomas is the Midwest’s response to Elon Musk, but reined in and potentially more impactful. And he actually looks like a light-haired Clark Kent.

Chris grew up in Waterford, Michigan, a suburb about forty minutes outside of Detroit. He describes his upbringing as “pretty working class”—think bon fires, donuts in the snow, lots of lakes.  After high school, he stayed in state for college, picking up degrees in economics and international relations from Michigan State University.

After graduating he takes a job in San Francisco as an investment banker.

If you sit down with Chris in conversation, take note of his eyes. He has the trademark look of intensity and focused passion that says will complete the mission at any cost.

Two years spent in SF, he gets a call from his brother who’s joining the army, so he decides to join the army too. Just like that. He puts down the phone, quits his job and enlists in the U.S. Army, for the next four years of his life, one of them spent in Iraq.

He emerges into civilian life through a master’s program at Yale. Not so bad for a working–class kid. But a working–class kid, nonetheless, so he ends up back in Detroit for an internship with Ford Motor Company, in the summer between school years.

Seeking a more interesting internship, he approaches the Executive Chairman of the company, Bill Ford, to assign him a new project.

“Over the course of that summer,” Chris recalls, “I worked on that project, and Mr. Ford became Bill, and this affinity around the future of Mobility came together.”

At some point Chris and a colleague sell Mr. Ford on the idea of starting a business in mobility with them.

“We didn’t know what exactly. We spent a lot of time building bad business plans. Then came up with a very good business plan around the idea of ‘Let’s build the first investment firm in this space.’

Chain of events: Chris starts at Ford Motor Company and meets Bill Ford, heir to Henry Ford aka the man credited with inventing the assembly line. As an intern, in a company of thousands, he walks up to that guy, asks for a new assignment, and in a few short months, Mr. Ford is convinced to go into business with them.

It is possibly the most epic example of reads that Napoleon Hill book and nails it.

The result is the VC firm Fontinalis Partners, which is a breakthrough company dedicated to funding the future of Mobility—everything from rideshares to autonomous vehicles.

A decade later, having brokered some of the biggest deals in the business, he walks away from Fontinalis Partners to co-found the Detroit Mobility Lab with Jessica Robinson. Their mission? To ensure Detroit’s place in the future of Mobility.

It’s a unique perspective, shaped by a unique vantage point—

The working class kid who goes to an ivy league school, returns to Detroit to start a business at the epicenter of the international Mobility movement, travels the world learning about the industry from all angles, then moves on from a stupid successful business to start another business that integrates all that he’s learned into making his home, (Planet) Detroit, a better place.

Phase one of the Lab is the Michigan Mobility Institute, created to be “an entity akin to the Carnegie Mellon University Robotics Institute or the MIT Media Lab in Detroit—for Mobility.”

Michigan boasts the highest concentration of engineers in the nation. But if the state wants to keep with the future of Mobility, it needs to focus on solving the problems of this emerging field.

“The model for the past decade,” Chris explains, has been to hire great men and women from Pittsburg and Palo Alto, and that’s something we should be doing, but it’s a finger in the dike strategy. We have to create talent here if we’re not only going to be a leader but remain relevant.”

A little over a year after launching the Detroit Mobility Lab, the Michigan Mobility Institute has partnered with Wayne State University to create the Center for Advanced Mobility, offering four masters degrees in “conductivity, electrification, robotics, and computer science all with a thread of mobility.”

Just like that Chris walks into one of the state’s largest universities and starts a degree program. The Future of Mobility is really broad: bikes, cars, walking paths, spaceships. They all matter. One thing’s for certain though—with Chris leading the way, the sky is literally the limit.