Who the Biden Campaign is Weighing for Vice President 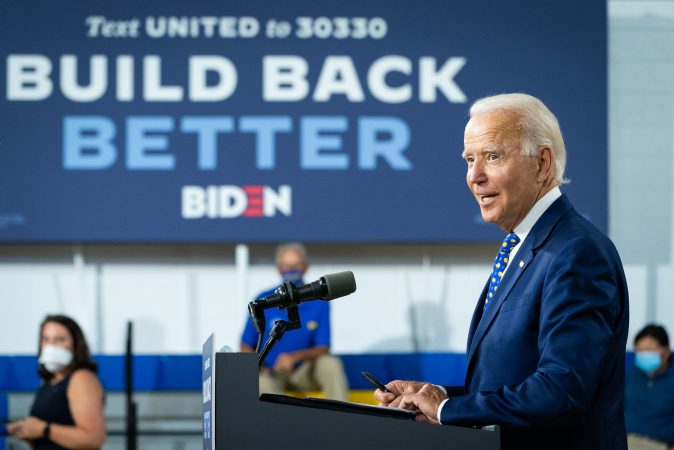 Joe Biden has held the title of Democratic Party presumptive nominee for some time now, running his campaign out of his Deleware residence amid the COVID-19 pandemic, while all the while leaving his choice of Vice President a mystery. The choice of VP can make or break a campaign and in a race with so much on the line like 2020, whoever the former Vice President picks could be the ultimate decider of how the race fares come November.

With a recent poll by Rasmussen Reports finding that over half of those polled do not expect Joe Biden to finish his term if he beats Donald Trump, the choice for VP is all more important this year. Biden previously shared that his nominee would be a woman of color, but this is uncertain given his current poll of potential picks.

Here’s a look at who’s being considered and what they could bring to the table.

Here he is comforting me on 1/4/17 just after my mother passed away. There is no one kinder, more empathetic and caring than @joebiden. He will lead America with the same deep compassion and decency. pic.twitter.com/4IBscj75VN

Susan Rice is one name being considered for the second half of the ticket in November and like Biden, she is also part of the former Obama White House. Having held the post of United States ambassador to the United Nations from 2009 to 2013 and United States national security advisor from 2013 to 2017, Rice’s time in the Obama administration was almost entirely focused on the foreign policy side of things, giving her less name recognition compared to other choices.

During her time as UN Ambassador for the Obama administration, Rice worked with former Secretary of State Hillary Clinton to establish a no-fly zone over Libya while helping to authorize further military action in the region. She also served as a public face on television following the 2012 Benghazi attack on the American embassy in Libya, a role in which she received much public backlash.

As National Security Advisor, Rice helped the Obama Administration in the Iranian Nuclear talks, as well as in advising around the war in Syria and other foreign policy matters.

With Rice being the most likely pick alongside Senator Kamala Harris, her spot as VP would solidify Biden as the candidate working to return the country to the days of the Obama presidency. Whether this is a positive or negative outcome is ultimately up to the voters in November.

America is desperate for a strong, competent, and honest leader who seizes the moment, takes responsibility, and does everything possible to solve the crises plaguing our country.

That’s why we must elect @JoeBiden on November 3rd.

After Susan Rice, Senator Kamala Harris is the next most likely candidate for VP consideration. Should Biden Pick the Senator, it would paint him as someone able to overcome differences given the heated exchange he had with Harris during the Democratic debates in Detroit.

Harris’s experience rests in her history as the District Attorney of San Francisco and the Attorney General of California before becoming a senator. Being someone who labels herself as a “top cop” and a “progressive prosecutor,” Harris’s experience in law enforcement brings concerns amid the ongoing protests against police violence raging across the country.

While the Independent has compiled a great list of Harris’s background as an attorney, she has held the position as Senator since 2017. During her tenure as a Freshman Senator from California, she has fallen in line among many Democratic policies, making her a pick that would fit right with Biden’s idea of nothing fundamentally changing.

Whether this idea appeals to voters will ultimately be decided in November if Biden decides to run with Harris.

A LONGSHOT BUT STILL IN CONSIDERATION:

Every issue is a women’s issue, but when our leaders make decisions without us, we’re set back and left out.@JoeBiden is determined to change that.

Read his new plan to fight for full inclusion & equality for all women: https://t.co/GDaHGsnyWr

Big Gretch herself has found her way onto Biden’s shortlist following her response to COVID-19, the spats she’s had with President Trump and her no-nonsense attitude when facing opposition to emergency orders over the past few months.

While Twitter trends would have one assuming Whitmer was about to be chosen as Biden’s running mate, the chances do not seem likely given the current plan for the Democratic National Convention. As pointed out here by the Metro Times, Whitmer is slated to speak on the second day of the convention, while the yet-to-be-named vice presidential nominee is scheduled to speak on Wednesday.

However, in the year that is 2020, anything is possible, so we cannot rule out Whitmer as a possible choice as of yet.

Of all the qualities we need in a president, we especially need someone who has genuine empathy for other human beings.

That’s why I’m in this fight for @JoeBiden. pic.twitter.com/lOp0YTPVZp

Another longshot being rumored as Biden’s running mate in Senator Elizabeth Warren, who given her presence in the 2020 race, would add further name recognition his campaign. Besides name recognition though, a pick of Elizabeth Warren also offers the chance that Biden would find it easier to attract more progressive voters, as well as the longshot possibility that someone like Warren could move Biden to the left on matters such as healthcare and climate change.

All possibilities and no for sure answers, just as with Whitmer, Warren’s nomination would see Biden rollback on his claims that he would pick a woman of color to be his running mate.

Until the convention begins on August 17, Warren will remain a potential choice.

The last name on our list comes with the least amount of name recognition, Representative Val Demings. Currently touted among those predicting Biden’s VP pick, Demings would come as a law and order style candidate, having served as the Chief of the Orlando Police Department until 2011.

Representing Florida’s 10th district, Demings served as an impeachment manager in the Senate trial of President Donald Trump and was re-elected to her second term in 2018. Her place in the potential pool of candidates worries some due to her background in law enforcement, something that could face scrutiny amid the ongoing protests against police brutality.

While still a longshot, Demings cannot be ruled out of consideration until Biden formally takes his pick.