Leni Sinclair Shares on Life, Detroit, and More Ahead of Her Motor City Underground Exhibition 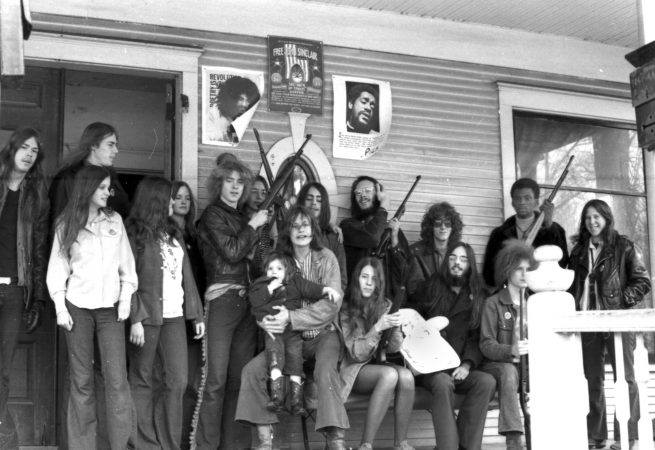 Born in Germany, Leni Sinclair left with her family in 1959 with little more than a camera in her possession and despite this, she never aspired to become a photographer. Yet, now 80 years old, and having lived a life that saw her immersed in some of Detroit’s most prolific arts and cultural moments, things sort of “fell into place.”

Opening February 5 at the Museum of Contemporary Art Detroit [MOCAD], Motor City Underground presents some of Sinclair’s best-known work that showcases titular moments in Detroit’s history. From counter culture moments, anti-war movements and organizing, to rock legends like John Lennon, Yoko Ono, and MC5, Sinclair has lived a life that plays out in a series of photos.

Speaking with Detroitisit, Sinclair talked of her life, her work, and some of the moments that stand out to her in Detroit’s truly unique history. 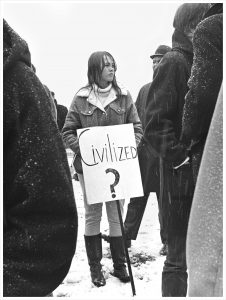 AN ANTI-WAR PROTEST IN DETROIT. PHOTO FROM MOCAD / BY LENI SINCLAIR

Leaving Germany before the rise of the Berlin Wall at a time when travel was less restricted between East and West, her camera was a going away purchase using money given to her by her mother. A purchase that she now knows her mother would be proud to see paying off for her.

“It was never any question of me becoming a photographer. I never ever aspired for that as a career. I’m an accidental photographer, I had a camera and now my mom’s present is finally paying off and that would make her proud if she were still alive,” Sinclair stated.

“That was how I got involved in all kinds of activities in America. I had a camera and I shot what I saw.”

“As I was growing up, I didn’t really aspire to escape, to go to the West, I aimed to come to America, that was my goal. Once I got here, I had no goal to what I was going to do, I assumed it would all fall into place and it did,” she added.

Making trips to and from Europe after she arrived in America, Sinclair would eventually find her way to Wayne State in 1964, where she became involved with the already established Detroit Artists Workshop. It was at this time where she would meet her future husband, Joh Sinclair.

Taking part in exhibitions through the Detroit Artists Workshop, Sinclair described her photos as “utilitarian” when asked to describe the story she was aiming to tell through her work. Putting it humbly, Sinclair shared how with her camera she just continued to shoot what she saw.

“For instance, we had a magazine called ‘Change’ and I think there were four or six pages just of my photographs of Detroit musicians and Chicago musicians that used to come to Detroit a lot,” Sinclair recalled when asked about some of her past shoots. “People we featured like Cecil Taylor or Andrew Hill, those people would make it on the cover or in the magazine. Really, it’s because I was there and had a camera, so I had to take the pictures.”

Working extensively with Detroit’s music scene, Sinclair would interact with the likes of Iggy Pop, MC5 as well as John Lennon and Yoko Ono — who had helped to take part in a concert to raise money for her then-husband, John Sinclair, while he was in prison on marijuana-related charges. John’s arrest had sparked a national protest, which culminated in the John Sinclair Freedom Rally in Ann Arbor, where John Yoko performed. 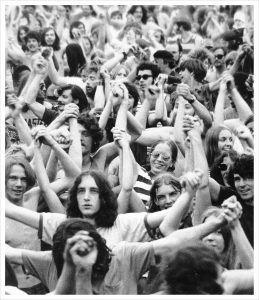 THE CROWD IN ANN ARBOR. PHOTO FROM MOCAD / BY LENI SINCLAIR

While the rally made headlines and John was released shortly after, Sinclair shared that John would have been released regardless due to a Michigan Supreme Court Ruling.

“The truth of the matter was that the Michigan Supreme Court had ruled on December 9, the day before the rally, that the old law was unconstitutional and John would have gotten out anyway,” shared Sinclair while discussing the rally and concert. “By then, however, I don’t know if they would have let them out three days after. I still wonder who arranged this in the justice department.”

Continuing her work, one aspect that stands out in her life — as well as in work featured in the Motor City Underground exhibition — is the 1967 Detroit Riots.

“When it first started, we thought it was a riot. We were driving down Woodward, up and down, gleefully ignoring all the traffic signs. We were kind of thinking it was fun. But then after a while, it turned very serious,”  recalls Sinclair.

The National Guard or somebody came and tried to bust the door in our apartment, looking for snipers in the closet. We had a confrontation in the doorway where John almost got us killed I think. He had his arms in the doorway, saying “you’re not coming in here,” he was ranting and raving. But, they did come in, they looked in the closet and then left again. The whole time I was standing behind John whimpering, saying “please, please, please” because we had a little baby that had just been born.

“Then the day after that, we threw open the doors of the Detroit Artist Workshop on John C. Lodge freeway and people from the suburbs had offered their help in feeding people since the grocery stores had been looted. These nice people from the suburbs had food drives in our artist workshop, which became a distribution center where they could drop off their food and paper from the community around us and others could come and pick it up,” Sinclair added. “But then we had to flee, we tried to help, but the National Guard came with tanks, it was like a civil war. We fled and drove to Traverse City to get out of the city.” 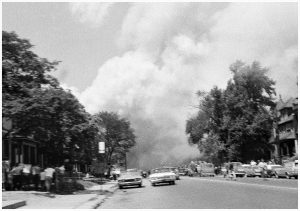 AN IMAGE FROM THE 1967 DETROIT RIOTS. PHOTO FROM MOCAD / BY LENI SINCLAIR

“I never agreed calling what we were doing ‘counter-culture,’ we were making culture, it wasn’t counter anything, we were doing our own thing. We didn’t rebel against anybody, we just went ahead and did what we wanted to do,” shared Sinclair.

In 1968, Sinclair and her husband had helped found the White Panthers, an anti-racist group of individuals who owe their origin to the Black Panther Party. Sinclair described that part of the inspiration was the Panther’s ability to organize their own people.

“We have been following the founding and activities of the Black Panther Party and we were impressed with the organization and how they organize their own people,” stated Sinclair.

After hearing then-leader Huey P. Newtown make calls for allies in San Fransisco, Berkeley, and Oakland to organize their own people against racism, Sinclair and her husband became inspired. Mixing satire, leaflets, and the band MC5, the White Panther Party was founded.

Describing the organization, Sinclair shared, “it was on the borderline between being satirical, being political and being serious. At first, it was like a big, funny game. First of all, the first chairman of the White Panther Party was this guy from Cleveland named Pencil White, because it fits so perfectly saying the “Chairman of the White Panther Party Pencil White.” 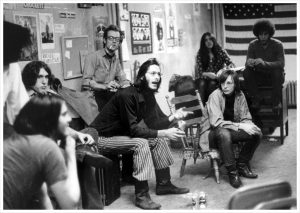 MEMBERS OF THE WHITE PANTHER PARTY IN DETROIT. PHOTO FROM MOCAD / BY LENI SINCLAIR

In the decades that followed, Sinclair’s spirit has never let up. Seeing the Black Lives Matter movement during the Summer of 2020, she would not let her age, nor the global pandemic, prevent her from seeing the movement.

“When the Black Lives Matter demonstrations were happening in Detroit, despite my age and the pandemic, I couldn’t help myself but take part,” shared Sinclair, as she described the happiness of seeing such a diverse movement of people. “I didn’t really feel comfortable in a big crowd, so I did not go, but I love to see the people and the feeling of marching down the street, all united, that was kind of reminiscent. The advice I have for young people is when you turn 18, register to vote and vote for the right people that you support.”

Sinclair’s exhibition runs from February 5 – April 18 at MOCAD and features pieces pertaining to Detroit’s rock and roll history, images of the 67 riots, anti-war demonstrations, as well as the White Panther organization, and more.

Subscribe to our newsletter for more, as well as regular updates on all things Detroit and more.