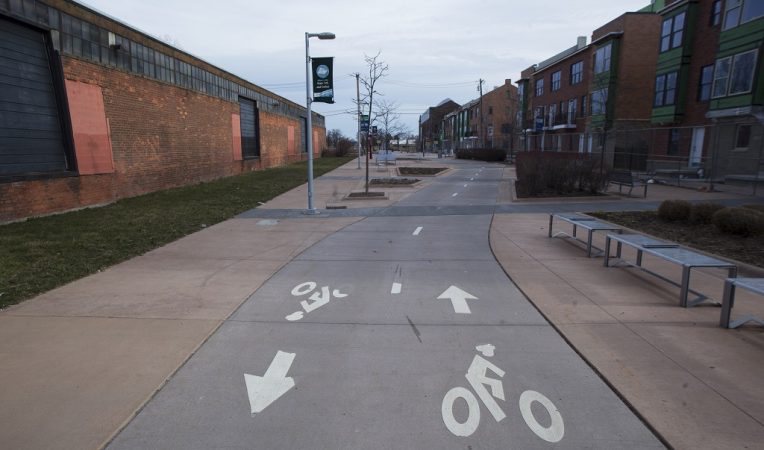 People are moving to the city or choosing to stay, as opposed to the experience of the exodus years. And open space is certainly not an issue for Detroit. There’s plenty of space in terms of lots, railroad corridors, roadways, parks and so on. In the past, planners organized the city into a balkanized map of residential, commercial, and industrial pockets and corridors with scant greenspace. Now, with the twin circumstances of abundant open space and renewed interest, Detroit is being given a chance to do something different, perhaps radically so.

Alexa Bush from the City Planning Department thinks about this question every day. Individuals are beginning to look at cities and their lives in them differently, and she goes on to forecast,

“For a long time there’s been this real big divide that says cities and the suburbs are where people and buildings are, and nature is some untouched thing out in the hinterlands that doesn’t co-exist with people. There’s newer thinking saying nature and natural systems don’t stop at the city limits …”

Parks are an obvious way to bring nature into the city and would help build and expand the natural areas, making cities a healthier place to live, thereby improving the quality of life for residents. As Bush points out, “There are real issues in environmental justice, people actually having access to quality outdoor space.”

Despite an abundance of vacant or unoccupied land, Detroit devotes far less of its footprint to parks than many other cities. According to the Trust for Public Land’s “Park Facts Report,” 6.4% of Detroit’s footprint is devoted to public parks compared to 9.1% in Chicago, 20.8% in New York and 12.3% in Los Angeles. Albeit, Detroit does have significantly fewer people than these cities at approximately 680,000 as of May 2017. However, park availability is perhaps defined more by total acreage than other uses–i.e. there is a park or there isn’t one. A critical issue may be the typical culprit, funding, for both the parks and their upkeep, a measure that finds Detroit right near the bottom of all park systems in the United States.

The challenge in increasing park acreage and access to it in Detroit is how to do it relatively cheap while taking advantage of existing assets. The City of Detroit 2016 Parks and Recreation Improvement Plan embraces such possibilities, at least on paper. Some of these strategies include reforesting areas, installing meadows, and providing space for urban agriculture.

The Plan also announces the creation of the Gateway Parks Program, which would focus on connecting parks to greenways and other parks and neighborhoods by acquiring strategic lots at the borders of parks. As the American Planning Association says, “creating an interconnected system, of parks and open space is manifestly more beneficial than creating parks in isolation.” This may be key in the thought process when considering how to grow the park system as it would primarily utilize existing park infrastructure while taking advantage of opportunities to link up underserved areas to this network.

Balduck Park on the city’s East Side is one such park being considered for the Gateway Program. This well-used park full of wooded areas, ball fields, and a popular sledding hill has vacant lots and fire damaged houses on the Radnor Street side of the park. Removing these houses and expanding the park would seemingly decrease blight in the neighborhood and open up new entry points to an already successful park. This would also break up the rectangular footprint of the park, creating more edge space and possible entry points for engagement with the neighborhood.

However, as the plan states, not all the existing open space fully serves the community’s needs. “Detroit’s parkland is almost entirely programmed with play equipment and amenities,” the report says. “When compared to cities with natural landscapes, the Trust for Public Land ranks Detroit as third most programmed for play as compared to natural landscapes.” These would be exactly the kind of meadow and forest landscapes proposed by the Plan.

Managing a forest or meadow in a city is likely to be different from doing so in a wilderness area. “There will always be an element of hybridity,” Bush says. “I do think you would have a responsibility to say we need the natural system to work within the urban framework. It’s not like it’s a woods, so we’re not touching it. It’s a woods and we’re going to manage it in a way that’s appropriate for its context …” Partial examples of hybrid landscapes can be found at River Rouge Park where grassy areas have been converted to meadows. There are a prairie trail and several semi-managed wooded trails.

The 2016 Parks Plan reports that citizens who were surveyed were anxious to see current parks properly maintained before adding new ones. “While parkland is often treated as an inherent good,” it says, “if it is not well maintained with up-to-date amenities, residents begin to consider parks as part of the larger problem of blight across the city.” Conversely, the City must also reckon with the fact that its current lack of structures and occupied lots present possibilities that could offer new amenities and drive development while also creating a landscape unique to Detroit.

In Bush’s words, the circumstances of our unique urban topography offer the opportunity for “novel uses.” “Could we create a completely different type of urban environment that actually puts that vacant land to good use?” she says. “That could be recreation. It could be productive. Could we grow food or crops and actually think about it as a small business engine?”

The forest, meadows, and urban farms in the Park Plan mark a major departure from the common cultural idea of a “park” that generally involves large spaces of mowed grass. Expanding beyond current park boundaries would also involve negotiating elements of the city’s former industrial and commercial infrastructure. This is the case at the popular Dequindre Cut, where the concrete walls of the railway define much of the space. As the surplus of open space itself, these remnants could be seen as an opportunity rather than an impediment.

“Large pastoral parks with ball fields and picnic shelters are more a form of amnesia, a practice of forgetting site histories, than indices of regional character,” the landscape theorist, Elizabeth K. Meyer says in her essay “Uncertain Parks.” Ballfields and picnic shelters are also great, especially when used to play ball or have picnics. However, the emergent vision of parks that stresses coexistence with natural and historical forces would seem to offer a deeper sense of engagement than parks solely devoted to recreation. Detroit has room for both.