Developing Detroit’s Broadway District With the Future in Mind 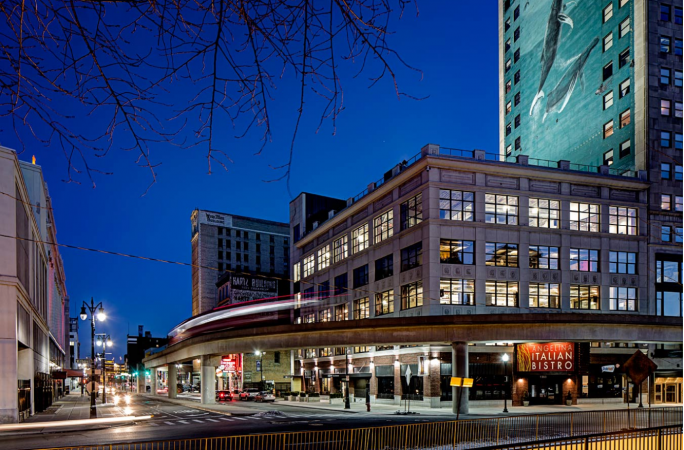 Metro Detroit architectural design firm McIntosh Poris Associates believes in the power of interactive city building, and that with the right approach, architecture can change the course of a city. This belief guides their work in preserving and revitalizing the architecture of Detroit – from individual buildings to entire neighborhoods – and has connected MPA with like-minded clients to create developments with a lasting impact for Detroit. This year marks the 20th anniversary of downtown’s the Broadway District, a plan designed in collaboration with Eric Larson, the CEO of Downtown Detroit Partnership and Larson Realty Group. To celebrate, the two have reunited to discuss how it influenced MPA’s approach to development and how the District set the tone for the opportunities being realized today. 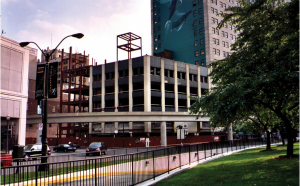 MPA met Larson in 1995. Coming from Chicago to Detroit in the 1980s, he arrived in a city with a renewed interest in its downtown core after a wave of development that included the Renaissance Center. Larson, himself came to Detroit through Hines to build One Detroit Center on Woodward and Larned. His work with Hines instilled the importance of the thoughtfulness of design and quality of space that shapes the mindset of large-scale development, yet he found a huge gap between the architectural planning of buildings and the legitimate planning of districts in Detroit.

At that time, there was an under-utilized area between Grand River and Witherell, Woodward and John R. that was ready and waiting for a larger district plan. The neighborhood had good structures – with more than 10 historic buildings, boulevards, direct access to public transportation, theater, and other culture – yet, no one had envisioned it as a thriving contemporary district. Larson then engaged MPA to help build a plan that would, in his words, “legitimize a district approach in the city and create an attractive destination that also provided an opportunity for small, local businesses and residents.” 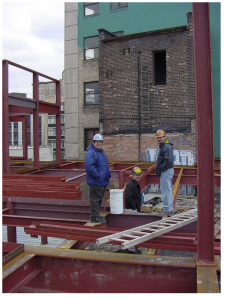 Together with Larson, MPA designed the plan that encouraged façade improvements, maintaining historic buildings that may have otherwise been demolished as well as the streetscape. The unique aspect of the Broadway District is that the layout of the buildings and the street is “comfortable,” it feels a bit removed from the buzz of downtown while still being a key artery and there is a great mix of uses from residential to commercial. The plan sought to preserve this intimate feeling in the cityscape by proposing the preservation of the buildings, some of which date back to the early 1890s, inside and out. From the restoration of the plaster reliefs inside the Metropolitan building to the addition of the Madison Theater Building that brought new office space and a favorite rooftop spot to the city. Adaptive re-use was a large part of the plan, which redeveloped the old Eureka Vacuum headquarters building into one of the first new restaurants the city had seen in years. People looked to the lofts in the Eureka Building as an exciting example of what true downtown living could look like in Detroit.

“The most exciting thing is that some of our actions preserved the opportunity for the great development we see today,” said Larson, “and not just with the buildings, but how they are developed. Of course, it is fulfilling to see the Madison building fully restored after Bedrock purchased it in 2011. But just as importantly, we created a foundation early on for people in the neighborhood to be a part of development.”

Community meetings are something MPA does really well and the process developed engagement for all the stakeholders in the Broadway District while shaping a new approach for successful development in Detroit.

Looking back with Larson on the impact of the Broadway District plan, MPA asked him to compare 1999 and 2019. How has the city changed?

“In 1999, this district was the first to demonstrate value in preserving as opposed to creating something new,” Larson said,” a lot of the tools and tenacity we use in development today really stemmed from that project. In 1999 there was this general belief that Detroit was ready for re-development, but there were still things to learn (optimizing historic tax credits being an important one).”

Until recently, Larson believes development was more about “keeping the patient alive” than “bringing it back to health.” But it is all necessary, “I am happy with my efforts in encouraging sustainable district development and I give MPA a lot of credit. Not many others realized that value in architecture and history here. They have their scars to show for it but where we are today would not have happened without their dedication and hard work just to keep buildings that defined our cityscape for generations.”