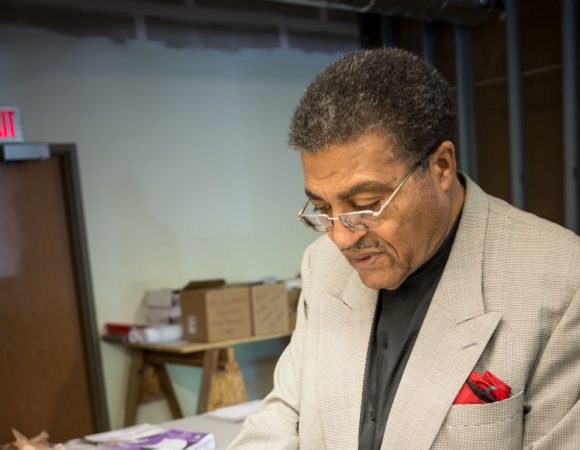 Midtown is largely credited with spurring the wave of redevelopment breathing new life into the downtown core of Detroit. One of the first neighborhoods to see renovation and new construction was Midtown which became a beacon of hope in the midst of blight. Many people contributed to this growth, but one man stands apart: George Stewart. With his tenacity and relentless vision to bring cultural enrichment back to the city, he fell in love with over 50 years ago, George devoted 16 years (and counting), his own personal funds and his willingness to “learn on the job” to fulfill his dream of bringing the Garden Theater back to life. His story and the story of how his project put Detroit on its path of re-development are stories every Detroiter and every urban planner should know.

Our current urban design projects, such as the East Riverfront Framework Plan, have us thinking back to MPA’s work re-building George’s entire block of Woodward and we are reminded that a city-changing plan often grows from a vision to change one building. So for this month’s Minds On Design, we gave the spotlight to George and talked about his history in Detroit, his theater and how he sees the city’s future taking shape.

Throughout the 16 years George devoted to the Garden Theater block, he realized that the key to development, especially in Detroit is understanding how the pieces fit together – finding creative solutions to the economic challenges and looking to the community as a resource. George has said, “It’s all about teamwork and people coming to the party,” and MPA was thrilled to be at the party. Literally helping George connect the block, MPA transformed the historic theater along with one adjacent office building into the Woodward Garden Theater and designed the Woodward Garden Apartments anchoring the block’s southwest corner. We devised creative solutions not only to meet the budget but also create destinations since we were, after all, re-building a vibrant neighborhood. “McIntosh Poris understood the unique process and its complexity,” George said when we asked why he worked with MPA, “you understood we were doing more than just building buildings, but that we also had to get them built.” 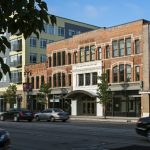 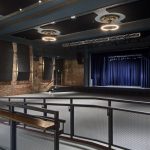 The interior stage of The Garden Theater. Photo by Justin Maconochie

George grew up just outside of Baton Rouge, Louisiana. Mathematics brought him to Detroit in 1959, where he studied and taught as a graduate student at Wayne State University. He was the first African American to teach in the Mathematics department at the university, which is fitting for a man who seems to always be at the forefront of change. Shortly after his arrival at Wayne State, George’s penchant for numbers and information technology brought him to General Motors where he helped establish the automotive industry’s first Computer Aided Design (CAD) program for designing cars in 1962! Eventually becoming the Director of Information Systems and Communications, George was also the first African American executive at GM Tech Center.

Looking back on his early days in Detroit, however; George’s fondest memories are of the cultural vibrancy in the city. “The middle-class, especially the African American middle-class, was at its peak when I came to the city,” said George, “Neighborhoods like Dexter-Linwood were full of successful families who settled down here because of the excellent school system (at the time Detroit Public Schools were some of the best in the country), they could afford to have two cars in the driveway and send their kids to college.” And that is just one neighborhood, the University District was another, and the list goes on – the density of the Detroit pre-1967 was immense. Evidence of this density certainly came through in the city’s nightlife – the theaters, social clubs and dance halls and George loved this thriving social scene. “Woodward used to be this strip of small theaters and community gathering places,” he mused, “and one of my favorites was the Latin Quarter on Grand Boulevard, right off of Woodward, which was used as a performance venue and an event space.” After 1967, George witnessed the rapid evaporation of it all, the steady migration out of the city and into the suburbs that shuttered many local businesses including the theaters and social clubs.

Fast-forward to the late 90s and George puts his successful career at General Motors behind him, leaving an enviable legacy of progress and change. Retirement, however, did not suit George, he felt restless and had the itch to create an even greater legacy, one he could share with his family and one that would impact the local community. And so, with no development or urban planning experience, George becomes one of the pioneering developers of Midtown. 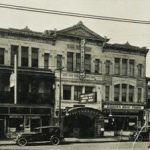 The Garden Theater circa 1923 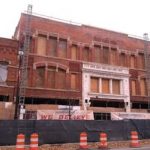 A boarded up exterior of The Garden Theater

It all started with the Garden Theater. George wanted to see the revitalization of the city and its once vibrant social scene by re-building one of the historic theaters into a center for contemporary culture – live music performances, community meetings, and events and even political and business meetings, all under one roof. Well, three roofs.

C. Howard Crane designed the original Garden Theater in 1912, originally opened as a vaudeville house and along with two adjacent office buildings (and the rest of the block). It later evolved into a movie house, then a rock club in the 1960s, and devolved into an adults-only theater before closing in the 1980s. George’s plan for bringing the theater back as a contemporary community space included expanding the original theater into the two adjacent office buildings of the same era and developing sufficient parking capacity for the venue. As is often the case with development, economy drove the project but George’s foresight turned each economic challenge into a growth opportunity, not only for his development but also for the city itself.

Buying the property on a land contract with personal funds, George was able to secure a Section 108 loan to help fund the development. The one catch? Section 108 loans would require complete ownership and control of the full block. George then set out to acquire the remaining buildings which he successfully did with the assistance of the DEGC and even other developers. But this success expanded the scope of the entire project to include more commercial space and a multi-family residential building, the Woodward Garden Apartments. The scope became so large it ultimately had to be split into four phases, each with its own set of economic challenges and new opportunities for growth.

Perhaps the most important growth opportunity George found for the project and the city was getting the historic district designation for the Midtown neighborhood. This designation allowed for the use of the historic tax credit not only for the Garden Theater block but for future developments that would help re-build Midtown and spur greater revitalization for the community.

Today, George admires the progress Detroit has made revitalizing the downtown core, but he still hopes to see the neighborhoods come back too, “Our work on the Garden Theater block

helped prime the pump for Detroit development, I hope it continues to spread out and the vibrancy extends to the other neighborhoods that were once great.” We hope so too George and we are ready for the challenge.