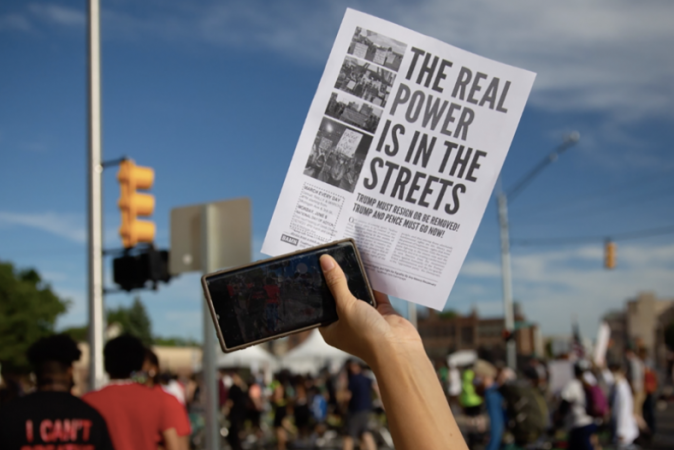 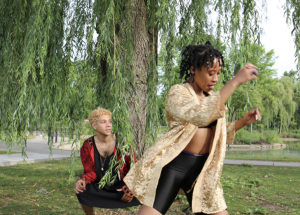 ASIA SALAKASTAR DIER AND CHRIS JAKOB IN THEIR FILM, THE CALL

“What do resilience, resistance, joy, grief, and collective care look like in the face of the dual pandemics of COVID-19 and severe anti-Black racism?” This is the question that Detroit Narrative Agency (DNA) — a local media organization that centers femme, BIPOC and LGBTQ stories — posed for their exhibition Radical Remedies, now showing at MOCAD. The prompt resulted in a myriad of responses from local artists and filmmakers, culminating in a collection of six films that portray their subjects in various stages of healing, reflecting and reacting to the current crises at hand.

DNA’s co-director Ryan Pearson says the call was intended to be inclusive of the various emotions that accompany catastrophes and not solely focus on grief.  “I feel like…sometimes, there is this binary…people wanna focus entirely on the grief and pain and the heaviness or people only wanna focus on the joy and the resilience,” says Pearson. “And the truth is, that both things coexist. So, like, people need a space to grieve. But people also need a space to find joy or reclaim joy and healing.”

Multidisciplinary artist, Vanessa Reynolds, uses euphoric imagery of her younger self to convey the complexities of oppression and racial inequality. “My short film, Joy Remembers, is an experimental exploration of Joy as the framework for processing and navigating systemic oppression,” she says. The film shows a young Reynolds dancing, overlaying footage that her family took in the 90’s, exploring Michigan Central Station. The vast emptiness of the train station stands as a symbol for all of the empty homes in Detroit — foreclosed homes that belonged to families that were pushed out, only to see their former home lay empty for years.

I recall, as a child, my family being displaced via foreclosure from the home that my mother grew up in on the west side of Detroit. Our world was turned upside down in the matter of a week, recounts Reynolds. As a person who faced homelessness in my early twenties, I often explored and squatted in neighborhoods where there were several blocks of vacant homes. In all cases, these houses still held the many possessions of the people who were forced to leave them in an instant. Now, there are seemingly more abandoned homes in Detroit than there are homeless people.

With homelessness impacting over half a million people a year, it’s maddening at the very least to think of so many homes sitting empty. In Joy_Remembers, Reynolds intends to outline the role that systemic racism plays in keeping so many families out of their homes. “I use the imagery of my four-year-old self imposed over the shell of the Michigan Central Station to illustrate a stomping on the legacy of hatred in government systems that were established to keep African Americans in cycles of poverty,” she says.

While systemic racism has been engrained in the United States since its origin, international outrage was sparked in 2020 after the murder of George Floyd, Breonna Taylor and Ahmaud Arbury. In Detroit alone, protestors marched for over 200 consecutive days, facing police brutality and hundreds of arrests. The community organization Inside Southwest Detroit documented vignettes of these marches in their film, Solidarity. Co-director Karen Cardenas says that working on the film was a cathartic experience. “Creating this film was something that I felt not only embodied collective care and collaboration but really allowed us to reflect on the ways in which our community pulled together and carried each other through so much of the grief and trauma experienced that summer,” Cardenas says.

She explains that media creators hold the responsibility of discerning how these stories will be told and understood — while they’re happening as well as in the future. “The role that artists have – not just in documentary filmmaking, but in other realms of expressive art – comes with a tremendous amount of responsibility when you consider [their] ability in cultivating dominant perceptions,” says Cardenas. “My work has always been centered around community and the sense of autonomy that comes with challenging the inaccuracies of narratives perpetuated by mainstream media.”

Undoubtedly, the media plays an irrevocable role in how the population at large understands and digests major events. And with the additional consumption of social media, people are constantly being berated with news, ideas, and opinions that they didn’t ask for. And while social media can be a conduit for connection and change, it can also be an overwhelming source of derision and misinformation. In their film, The Call (only available for viewing at MOCAD), Chris Jakob, Costa Kazaleh Sirdenis, and Aja Salakastar Dier unpack feelings of oversaturation, fear, rest, and restoration related to media consumption and ancestral trauma.

Co-director and performer Aja Dier recounts her experience of being frozen in fear upon seeing a police car arrive on her street while she was working on the Radical Remedies piece.

My body began to panic–my heart was racing, I began to sweat, my extremities went cold as the fear rushed through my body.  I began to investigate my body’s reaction. I’d seen so much police violence during that time–and really the past ten years, I felt like a target because of the way I looked. I know how fear and stress ages and breaks down the cells of the body and makes us more vulnerable to disease. This film was an investigation into how we can live with less stress and fear. We found that ritual and leaning on our ancestors who endured much worse was the only way for us. 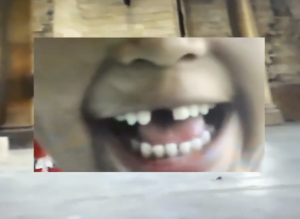 Dier recollects a scene in the film when she and Jakob were performing a ritual call to their ancestors. They were in a secluded wooded area, performing the scene, and an entire family of deer walked into the shot. “It was most definitely our ancestors letting us know that they heard us,” Dier says.

This connection to nature and severance from technology was a prominent theme throughout the film. Dier says that disconnecting from the omnipresence of virtual life allowed her to feel centered and calm.  “[During lockdown] I found myself…doing a lot of connecting through social media, Facetime and Zoom,” says Dier. “These were great ways to connect but there was also a great deal of fear, violence and hatred being transmitted through these networks.”

The center of Dier’s work lies in truth. Working between logic and intuition, the physical and the spiritual, she makes way for the themes and presentations that feel most organic to her as an artist and the nature that surrounds her. “Like my boy, Shakespeare said a long time ago in the speech to the players in Hamlet, our job is to hold a mirror up to nature,” Dier muses. “My job as a performing artist is to make my instrument ( my body and my voice) as available as possible in order to channel Truth.”

Truth seems to be the resounding theme in Radical Remedies’ featured films — the mutual joy, pain, resilience and renewal shared by the artists. These shared experiences extend outside of the artists’ community and to the hearts of those enduring the same struggles. “I’ve heard people say, ‘That was my exact experience,’” says Pearson. “Or ‘I was having those exact same feelings and didn’t know how to describe it.’ It’s…allowed us to connect with each other through these films.”

Radical Remedies is showing at MOCAD until May 2, 2021. Detroit Narrative Agency is currently accepting applications for their Ethics and Aesthetics exhibition and will be launching a 12-week accessible filmmaking workshop for beginners in mid-April. You can keep up with them on Instagram or Facebook or at https://alliedmedia.org/projects/detroit-narrative-agency and donate here. 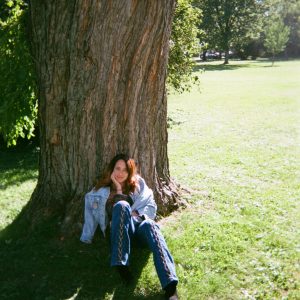 Sara Marie Barron is a songwriter and music journalist based in Detroit, Michigan. Her work has been featured in the Detroit Metro Times, Audiofemme, Interview Magazine, and The Face Magazine.