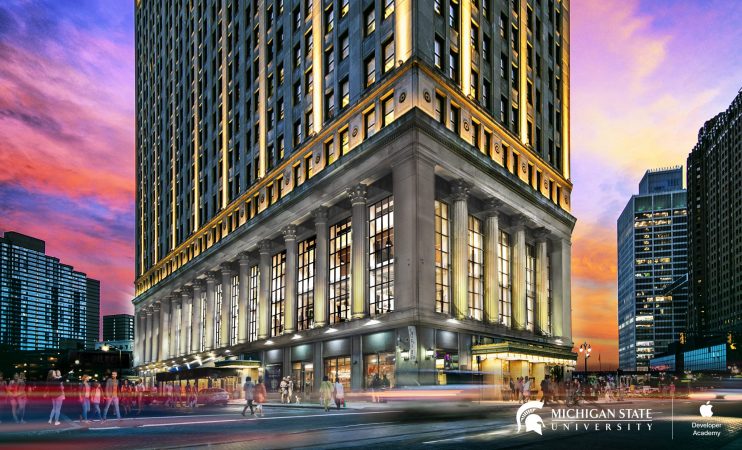 Our world seems to be pushing towards a science fiction future. We live in a world ever shaped by technology and its rapid changes. As for our future, digital currencies, smartphones, and Google Homes have us guessing at what it will hold.

Detroit, however, may just be a special piece in the future’s puzzle as the launch of a project combining efforts from Michigan State University (MSU) and Apple will bring a technological and educational experience to Detroit—grounding this city in tech advancement. 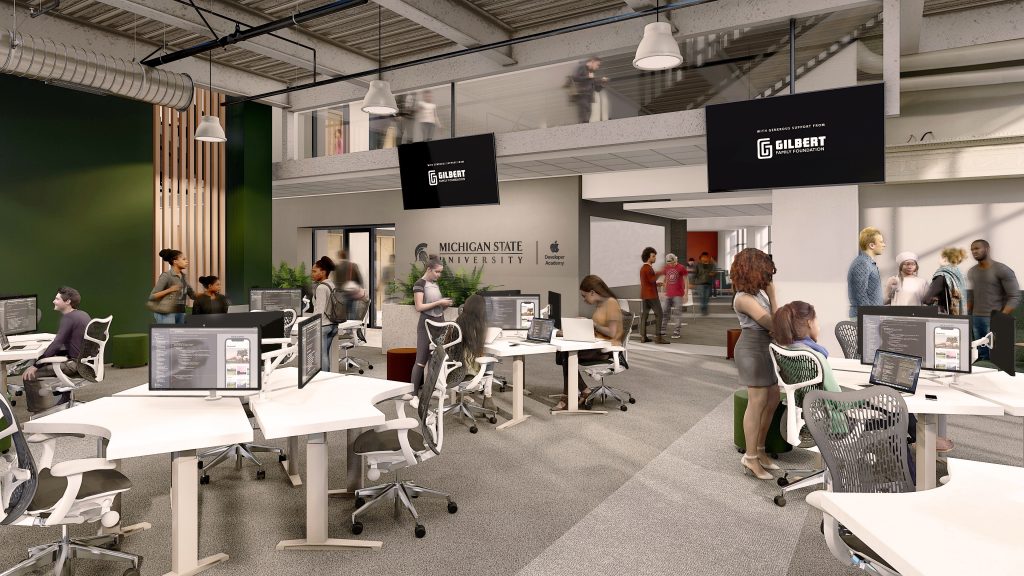 Apple’s first Apple Developer Academy (ADA) in the United States, supported by the Gilbert Family Foundation and in partnership with the Rock Family of Companies, will launch in October of this year and will be located in Downtown Detroit.

Apple’s arrival in Detroit has the potential to impact generations of Detroiters by offering new, unique pathways to join the tech renaissance, said Dan Gilbert, Chairman and Founder of Rocket Companies. As Detroit’s tech sector strengthens, we need to invest in intentional programming like the Academy to advance equity and remove barriers to entry for members of our community. Jennifer and I are proud to be partnered with our alma mater, MSU, and Apple to realize this vision.

MSU is currently accepting applications for both the one-year program and one-month programs that will discuss and teach app design, coding, marketing, and similar entrepreneurial topics.

Sarah Gretter, Associate Director at Hub for Innovation in Learning and Technology at MSU, is excited to see the launch of this program as it becomes more solidified every day. As the director of Detroit’s Apple Developer Academy, Gretter has been working with a team from Apple for over three years to assess how best this ADA can mesh with the city’s already established infrastructure.

“We know that what we want to build is long-term relationships with the existing ecosystem around tech, the tech industry, and the entrepreneurial… spirit that exists in the city,” Gretter says. Since Detroit is a city that continues its struggle with gentrification, Gretter and others on the team aim to focus on Detroiters with Detroit intention, hoping that those attending the academy will come from the area and give back to the area.

Beyond these hopes, Detroit’s Apple Developer Academy is the first to be constructed under Apples’ Racial Equity and Justice Initiative. “There is a strong lense around ensuring that there’s diversity, equity, and inclusion embedded from the get-go in everything that we do,” says Gretter, “… I think hopefully we can lead the way with Detroit being the first academy that has that intention behind it and then hopefully is a model for other academies, but also for the workforce in general.”

Gretter goes on to discuss how diversity, equity, and inclusion are such necessities in a field that is previously lacking in these capacities such as the tech industry. Gretter herself, as the first female director of an Apple Developer Academy, has already begun to push past boundaries and continues to put great emphasis on thinking outside the box.

Originally from France, Gretter expresses how her varied cultural experiences have influenced her work in the past as well as present, “I’ve been in the U.S. for over 15 years now, but I do keep in mind my cultural background and I think this helped me bring in some diversity in thinking—diversity in experiences. And I think generally it has enriched the way that I look at educational opportunities and educational learning experiences… and how I put my work together based on my own cultural background and experiences.”

Apple Developer Academy in and of itself is a distinctive learning opportunity and offers a different approach to what higher education can look like. Individuals going through the academy in other countries have created Apps that aid in communication, understanding, and other ways. Aisyah Widya Nur Shadrina attended the Developer Academy in Jakarta, Indonesia, and created an app, Hearo, that visually translates sign language to voice and text.

This is just one example of how thinking outside the box of traditional higher education can benefit future individuals and mass connections.

Gretter is excited for Detroiters to explore the tech industry and break some barriers of their own. Detroit has such energy about creating new things, new ways of thinking, and innovative ideations of the future. For Detroiters who have a passion for change, for creating equal and different opportunities, and generating influential experiences, Detroit Developer Academy is excited to invest in you and this city’s future.

There is no crystal ball depicting what science fiction novel our future will most likely resemble, but with different higher education opportunities such as this Developer Academy combined with Detroit’s innovative spirit, we will continue to be pioneers of diversity, equity, inclusion, and entrepreneurial spirit.

This article has been modified from the original on June 8th, 2020.