Museum’s in the 2020s, Honing Focus on Equity and Marginalized Voices

Held as Part of the Detroit Historical Society’s Third Thursday Discussion Series, Decolonization, Equity and Marginalization Were the Topics of Discussion 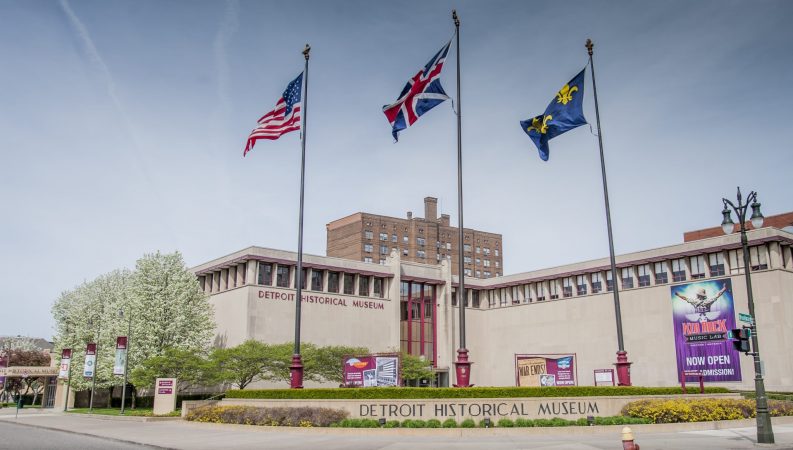 After a year that saw the fight for social justice erupt across the American cultural sphere, museums are approaching a topic not frequently at the forefront of the conversation, how to align marginalized voices better and create a more community-centered museum experience. Honing in on the topic as part of their most recent Third Thursday speaker series, Detroit Historical Society [DHS] moderated a discussion with curatorial professionals Joy Bivins, Corey Bowen, and Erin Falker Obichigha about a museum’s role in the 2020s.

Before the discussion began, moderator Malika Pryor, Senior Director of Education and Programs for DHS, introduced the night’s themes and topics, which included decolonization, equity, marginalization, and creating a museum that better represents the stories and experiences of the communities that surround them. Moving onto the speaker session, each professional shared their experience in working to create a more equitable, open museum experience that takes the voices of marginalized communities into account before displaying sensitive objects and exhibitions.

WORKING WITH MUSEUM’S AND CULTURAL INSTITUTIONS

Working with the Krannert Art Museum, Corey Bowen shared how in the 50s and 60s, the museum acquired large quantities of artifacts from South America, intending to display them as modern art. Working on redesigning this exhibition, he brings up the political complexities and questions around the museum displaying the South American pieces, sharing that it’s hard to approach the topic with a “North American lens.”

One of our goals from the start with this redesign of the exhibition is being as open as possible about the complex status of these objects and the way that the political questions they speak to aren’t ones that we can necessarily approach from our own North American lens. Especially the questions of indigeneity that they bring up and that they are very particular to the proving context of what what is archaeological heritage what is history whose history, is it, whose objects are these? stated Bowen.

“Those are questions that Americans or American museums often try to address, but it is through a very American lens and that is something that we have been trying to avoid because when you say native when you say local things like that in the US, they have a very particular meaning, but that meaning doesn’t always transfer very well to what that might mean for a different audience.”

While the topic is a sensitive one to approach, Bowen shared that as part of the redesign, the museum is working extensively with Latin American communities in Illinois and the town in Peru where they believe the objects were taken. By taking the indigenous community’s voices into account, the museum can better decide whether there is a proper place to display the objects, how to handle and approach the topic of decolonization properly, and whether such objects should even remain in the institution to begin with.

“Those are questions that we feel like we aren’t able to answer as the white museum guys, and we’re trying to let these questions be answered by people who deserve more say,” added Bowen.

Erin Falker, Curator and Senior Creative Director at the Carr Center spoke after Bowen, talking about what equity and diversity look like to her as someone working with a small Black organization. Located in Detroit, the Carr Center is an institution that centers focus on the African American cultural experience to “inspire, entertain, challenge and educate.”

“What equity looks like for the Carr Center, as a black organization, is not, you know, activity inboxed. It’s something real. So we really kind of like live by that mantra,” she shared.

Turning the focus to the idea of holding productive conversations, Falker added, “We know that we serve as this counter-public forum, but we also know that we have to open up those forms to other people in order to see change. We actively invite other people around our table and we’re very intentional about it. This is our table, and we’re inviting you here.”

A CONVERSATION IS A GOOD START

As both Falker and Bowen pointed to, one of the first steps to creating a more equitable, open and fair museum experience is holding these conversations with marginalized communities and ensuring that their voices are taken into account and those cultural institutions put their money where their mouth is when they talk change.

Looking at cultural institutions today, Joy Bivins, Associate Director of Collections and Research Services and Interim Co-Director at the Schomburg Center for Research in Black Culture, part of the New York Public Library, looked at where many museums and institutions stand today. As Bivins shares, it’s not enough for museums to just hire a more diverse staff, as they need to show that as a cultural institution, they are committed to changing the cultural situation as a whole.

“I think the most positive change I’ve seen is that it’s very difficult to be accepted as legitimate without having a diversity, equity, and inclusion council, or at least asking the questions,” stated Bivins. “So that that notion that you would just bring in more brown people and then not change the culture of the institution to retain those, those people, it doesn’t really fly anymore, at least in the institutions that I’ve seen.”

I would say the things that I’ve seen happen in the years that I’ve been working are the kind of recognition that there are some systemic issues that we have to deal with. They’re not surfaced, we have to go deeper and some of the questions that have to be asked are hurtful difficult and have to be grappled with,” she later added. “And then the other thing I would say is that there are institutions coming into being that are attempting to correct historic erasures. So, in that sense, I think something is happening. Now whether that can be sustained, it really is up to us as folks in leadership or folks who will be in future leadership roles to keep that in mind.

Turning the focus of discussion back onto decolonization, the panelists were asked about the idea and whether or not it’s necessary for our cultural institutions. Comparing the idea to mathematics, Erin Falker made her point by asking what needs to go in order to better center more voices?

“Decolonization to me is kind of like subtraction. So thinking about what do we need to take away, what do we need to break down, what needs to go about our institutions, about our that history? What can we get rid of, so that we can then add, so we can make room for more people for more voices?” shared Falker while working to address the need for decolonizing cultural institutions.

As the discussion drew to a close, the idea of what needs changing in our cultural institutions was very apparent given the similar point made by professionals working in very different institutions. A lot of history will need to be addressed and uncomfortable conversations will need to be had, but through discussion, better institutions can emerge.

Having worked with what he called essentially “colonial institutions” like Chicago’s Field Museum, Bowen drew on Falker’s point as he spoke on the good that can come from decolonizing museums and institutions.

“We’ve learned something when we’ve learned that there are ways that these institutions can give voices to people that haven’t had them. There are ways that we can use the status of these institutions to bring people into conversations that they were not part of before and we can give legitimacy to various histories, to various forms of art that are have not been granted that sort of legitimacy, not been granted that sort of mainstream status,” added Bowen.

The next Third Thursday discussion series will take place on Zoom with another productive conversation featuring Rochelle Riley, Detroit’s Director of Arts and Culture, as she speaks on her new book, That They Lived: African Americans Who Changed The World. Registering for the event is free may be done so at detroithistorical.org.

Be sure to subscribe to our newsletter for regular updates on all things Detroit and more.