He’s into Mobility, Suits, Family and Detroit. Then he Takes us to His Childhood Home 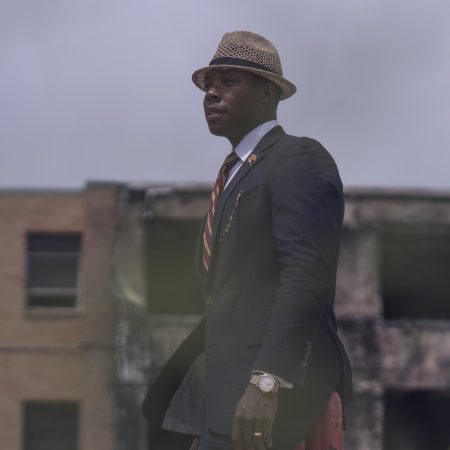 Usually, his dress code is a tailored suit, and a tie his choice of accessory. That’s just how Bryan Barnhill looked when we met on the east side of Detroit at his place of inspiration, his childhood home.

Nancy Nguyen: Tell me about the area we’re in?
Bryan Barnhill: This used to be Rosa Parks Elementary School. Besides all the rubble, you can tell it still looks fairly new.

NN: So what happened?
BB: The school district believed that the population in the area wasn’t strong, so they divested the project. For a majority of my childhood, I watched it being built. All the kids in this neighborhood were excited because of the brand new basketball court. At the time, we used to play basketball in the street with an old plastic crate nailed to a board. So when we saw that new basketball court, well, you can imagine our excitement.

NN: Why did you choose this as your place of inspiration?
BB: Because, it’s who I am. I’ve been fortunate enough in life to have a set of experiences like going to school, being able to travel, and to make an impact. When I’m home, here, and seeing where I grew up, it’s a reminder to me of not only how far I have come but who I am. As you can see, there was a struggle and some brokenness but also a story of determination which makes me… me.

This is the first house we had as a family. When we first moved in, it was in the worst shape. But, my father poured blood, sweat, and tears to make this place a home. Now, it’s heartbreaking to see it in this condition. The lot next door, even when the original house burned down, that was still a place we would play in. My brother ended up tearing up his knee because he fell on some glass in the debris. After that, the city cleared the rubble and we were left with this lot and it was my job was to keep it clean. I would mow the lawn and clean up whatever trash collected there. At one point it even looked kind of nice.

NN: How did you end up where you are today, as the Chief of Talent at the City of Detroit?

BB: My story starts here, with this neighborhood. I remember around five years old realizing that the rest of the world didn’t look like my block. Specifically, I remember a moment when I was in the car with my mother, off of Gratiot and 8 mile. We were heading into the suburbs, and I started to look around. I saw that the community we were driving through had no broken concrete, no trash littered the ground, no abandoned buildings, and even the people didn’t look like me. It was at that young age where I got a huge taste of what it was like to be underprivileged in an area with a lot of disparity, and quite frankly, it felt unjust. So I became determined to do something about it. Luckily, I had good parents who were also determined for me to do well in life. They helped me understand that education was a pathway. I was a good student, I had knack for meeting people, and the heart for helping others. With a little confidence and a lot of luck, I was able to go get into Harvard, and here I am today.

This gentleman has deep roots.

NN: Is how you grew up influential in the way you dress today?
BB: I didn’t always dress this way. The outfits I would wear back in the day would include a matching du rag to a jean outfit or a velour sweatsuit with some chains. Then Kanye West came out in the polos and the blazers, so that became a thing with me in high school. In college I joined the Spee Club and my mindset changed, which ultimately changed the way I dressed. Joining that club, in my mind, was a symbol of an entrance into a new stage in life, and I wanted my dress to reflect that while also holding onto my roots.

NN: These days, are you always dressed to the nines – suit, tie, and all?
BB: People tease me for not owning a single pair of jeans. I’m usually in slacks, dress pants, chinos, or khakis. I typically try to stay dressed even when I’m outside the office. However, lately I’ve been working out, so I’ve incorporated t-shirts.

NN: What are you wearing today?
BB: I am wearing a suit from Brooks Brothers, their outlet store. I like to be very frugal and still look nice at the same time.

This tie is very special to me. It’s my club tie for the Spee Club at Harvard that I joined in 2006. It’s a tradition that has existed in Harvard for over a hundred years, beginning in the 1800s. One of our more prominent members was JFK. For me, the Spee Club was a group of great people that provided me a special experience, so I’ll still wear the tie in honor of the spirit of the club.

I do like to accessorize. Often I’ll wear small details like this flower on my lapel. I’m really fond of the days when men dressed responsibly, elegantly, and classy. Often times they wore flowers on their lapel just like this. My monk straps are from a local shop where I get my tailoring done – Sam’s alterations in Southfield.

NN: What fashion decade are you most connected to?
BB: There are things from different eras that I appreciate. The Victorian era intrigues me when men dressed flamboyantly, over-the-top, colorfully, and voluptuously. Then you get to a time when things were a little more minimal with focus on clean lines. I like to incorporate various aspects in my wardrobe – being fancy but still staying within bounds at the same time.

NN: And a typical date night outfit with the missus?
BB: It depends on the time of year and the weather. My wife and I went on a date last night. There I wore a sky blue tailored suit with an open collar blue shirt with blue checkers.

NN: What’s the first thing you notice about a person dress?
BB: Always their posture and confidence. Then I focus on their face and eyes. I try to get a sense of who that person is first before I can step back and take in the rest of what they are wearing. And then I look at the whole ensemble. I appreciate coordination with subtle pops in accessories.

NN: What is the one thing in your closet that you would never give up?
BB: Either it’s my club tie or these opera pumps slippers. They’re suede slippers with red silk on interior and two B’s on them. Of course, it stands for Brooks Brothers, but people think it stands for Bryan Barnhill.

NN: Is there one designer that you shop or admire the most?
BB: I like Paul Stuart, and he has a line called Phineas Cole which is a more modern, formal high fashion collection. I’ll wear a button up, slacks and blazer from him.

NN: Your kids are young now, but do you think you’ll influence what they wear when they get older?
BB: I have a three-year-old son and a one-year-old daughter. Right now they’re not at the point yet where they can dress themselves, so I like putting their outfits together. Especially when we are all going out somewhere, I like when we all look sweet. My wife, on the other hand is like, “They’re kids! Let them be kids,” but I still do the shopping for them.

An ex-biochemist turned content-creator, hailing from Ann Arbor, Michigan. Nancy floats back and forth from AA and metro Detroit and explores documenting journey as a lifestyle blogger.