With Seven “G.O.A.T. Modes” to Get You Where You Need to Go, the Ford Bronco Sport Brings Along a Unique Story of How it Got its Tagline

In their first spots featuring the all-new Ford Bronco Sport, a little bit of mythos is added to the new all-terrain vehicle. With seven modes to get you across just about any terrain, Ford has released a series of spots to feature the Bronco Sport while giving it quite the unique origin story. 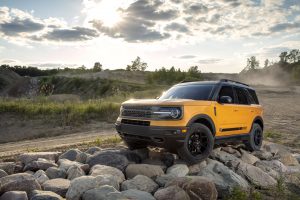 One day, as Ford’s legend goes, a herd of goats found a colt lost in the mountains trapped under a rock. The goats then rescue and raise him while teaching him to navigate the jagged, rough, mountain terrain and treacherous waters. With this experience leaving the Colt confident and capable of traversing any landscape, the horse transforms – literally in the case of the commercial – into the all-new Ford Bronco Sport.

With the spots featuring the taglines “Raised by Goats” and “Built Wild,” Ford aims to show that the Bronco is right for those living an adventurous life on the move.

“The Bronco Sport is ready to introduce even more outdoor enthusiasts to the wild,” shared Matt VanDyke, director of U.S. marketing. “This campaign kicks off with a fun, mythical story of how the Sport – the Bronco of small SUVs – developed its impressive off-road capability.”

The second spot, which debuted January 11 on Good Morning America, continued to build on the Bronco Sport’s extreme capabilities. In both spots, the feature highlighted by Ford is the independent front and rear suspension, which was tested in multiple demanding environments across North America and will allow drivers to maintain vehicle composure while trekking across any rugged terrain.

With the ability to cross just about any terrain, it’s obvious to see where the Bronco’s Goat comparisons come in. In fact, the vehicle is so similar to a goat that Ford literally worked with the animal in an authentic environment while producing the new promotional spots. 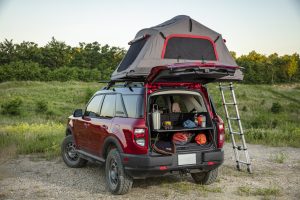 Produced and shot in Washington state on Mt. Baker, a “legendary volcano” located in the North Cascades National Park, the production had the challenge of working with trained goats and horses to produce the unique first spot. In the end, though, the challenges paid off and the production was left with a shoot that truly showcases all the Bronco Sport is meant to be.

“We decided early on that we wanted to make this true to nature, using real animals in an authentic environment,” shared Stuart Jennings, creative director for Wieden+Kennedy New York. “So we were doing a lot of work even before the cameras were rolling, researching breeds of goats, hiring animal trainers, talking through the performances and developing our visual script.”

We really wanted to walk the line on this one – the animals are adorable, but the focus is truly on Bronco Sport,” he added. “The idea is this vehicle is built for the wild, it’s rugged and tough, and the ultimate takeaway is Bronco has G.O.A.T. Modes. We allude to that all the way through. It’s not just a knob on the vehicle – it’s a system that can take you nearly anywhere you want to go.

The first spot, which debuted during a Saturday Rams-Seahawks NFL Playoffs Wild Card game, was directed by Stacy Wall, who previously filmed Ford’s Built for America campaign. In contrast, the second shot was directed by both Wall and Lisa Gunning and featured the Bronco’s “G.O.A.T. Modes”. The final shot, which debuts in February and was filmed by Gunning, touts the tagline, “Find Your Wild,” and showcases the versatility of the Bronco Sport.

In total, there are more than 100 compatible factory-backed and aftermarket accessories that can transform the all-new vehicle into a kind of mobile basecamp fitting for the needs of any individual. In total, there will be four lifestyle bundles released for the Bronco Sport that include themes for biking, snow, water and camping.

“Whatever you’re into, you can make this vehicle work for you,” said Jennings. “The Bronco
Sport is amazing, and we wanted to show that in the most impactful way possible.”

Subscribe to our newsletter for more and regular updates on all things Detroit.