NVIDIA Sees That the Future of Transportation is Here

The Future Comes Down to Autonomous Everything 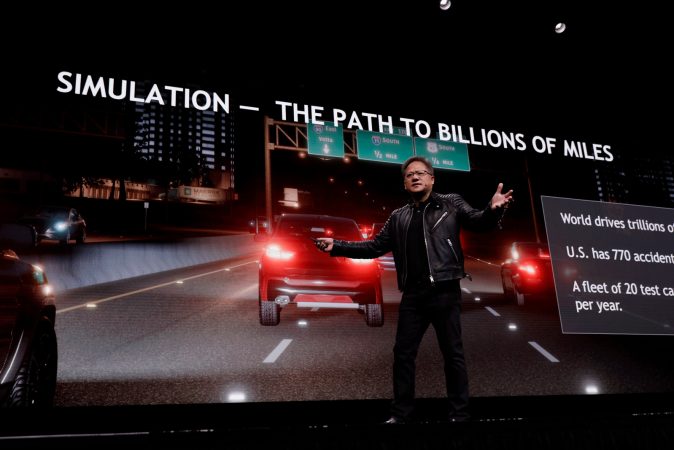 NVIDIA, a company you likely never knew existed, is driving the future of transportation.

“Some describe the CPU as the brain of a computer and the GPU as the soul.”

The acronym GPU means Graphics Processing Unit and became popularized by Silicon Valley based supplier NVIDIA in the late 1990’s. When video games demanded better visuals and graphics, the role and necessity of the GPU was established. With the development of personal computers and increased expectation of video performance the importance of and reliance on GPUs grew. Different than the CPU (Central Processing Unit), a GPU has 1000’s of cores for processing. Think of a CPU as a road and a GPU as a highway with not one but many lanes. GPUs enabled the graphics and video delivery to come alive, delighting the end-users.  Some describe the CPU as the brain of a computer and the GPU as the soul. The evolution of the GPU continued as computers became more competent and algorithms became more complex. The role of a GPU is now better described as a solution to accelerate math which is a necessity for the capable computation of complex algorithms.

“It’s clear to see that the NVIDIA GPU is destined to play a dominate role in the mobility sector, specifically the development of autonomous transportation.”

NVIDIA has been a leader in developing GPUs, originally for graphics and now used as the basis of machine learning, the precursor to artificial intelligence. It’s clear to see that the NVIDIA GPU is destined to play a dominate role in the mobility sector, specifically the development of autonomous transportation. For those involved in the auto industry this comes as no surprise.

A featured speaker at this year’s Automobili:D in Detroit, NVIDIA’s Senior Director of Automotive, Danny Shapiro, has been holding court at NAIAS for the past several years, providing insight to the growing capabilities of GPU’s. Danny is proud to point out that nearly every automotive manufacturer relies on a NVIDIA GPU for some phase of development, design, engineering, graphics, marketing, screens, infotainment and ADAS (Advanced Driver Assist Systems).

“This year Jensen proclaimed that NVIDIA believes that “everything that moves will be autonomous or have autonomous capabilities.”

For the past ten years, one of the larger gatherings of the tech industry in Silicon Valleyhas been NVIDIA’s GTC (GPU Technology Conference). A must do staple for any futurist, every spring, the GTC is a gathering of over 8000 developers, data scientists, startups, analysts, VCs and CXOs focused on the use and development of NVIDIA GPUs.

What started as a user/customer group, enabling NVIDIA to engage and share knowledge directly with the developers, has evolved into a technology conference focused on the potential use of AI for business. Its success has spawned NVIDIA gatherings in other locations worldwide…Taiwan, Japan, China, Germany, Israel and Washington, DC.

The GTC highlight is the keynote by the energetic NVIDIA CEO Jensen Huang during which he unveils new products software and research along with NVIDIA’s plans for the future. This year Jensen proclaimed that NVIDIA believes that “everything that moves will be autonomous or have autonomous capabilities.” He went on to roll out the NVIDIA Drive Roadmap, his plan for the holistic development of autonomous transportation.

Transportation is one of the largest industry’s in the world with a value of over 10 trillion dollars. It’s burdened by a number of challenges including safety and congestion. Overcrowded cities continue to increase real estate demands and costs. Adding to demand is the estimated 2-3 billion parking places dotting the mist of valuable real estate.

This is pushing populations further out of city cores and thus increasing commute times. Respectively, as online shopping continues to grow, product delivery is clogging this infrastructure. All this is only getting worse as the world’s population is projected to increase by a billion in the next dozen years.

The prognosis is that autonomous vehicles can help solve these challenges, reduce the cost of transportation, change the way we get around and ultimately influence changing how cities are designed. This is not an easy task. Jensen characterized this as “perhaps the hardest computing challenge ever encountered.” He emphasized that “NVIDIA is dedicated…committed to the challenge…with so much at stake…focused on safety as the most important component.”

NVIDIA has dedicated the past several years to provide an end to end solution described as the NVIDIA Drive Roadmap. An open platform, all the key transportation sectors and companies can work together. Currently, it includes 370 partners from all over the world, each coming together to help solve this “grandest of computer problems.”

Additional challenges add to the complexity. The hardware must be “automotive grade.” Detroit based engineers are well aware of the demands of any product to be automotive grade. It must be environmentally sound to withstand the rigors of the outdoors and motion, temperature and vibrations. As an addition to an already complex environment, it must be able to both detect faults and manage these faults along with the car itself. The level of functional safety is so high it’s a first for the auto industry.

The expectations of safety must resemble the rigors of the airline industry, which has the highest safety standards. Driver and cabin monitoring and AI can make certain that not only is the car doing the right thing, but the driver and occupants of the cabin are also in tune. Along with being energy efficient and economical.

A challenge of this magnitude needs to be solved step by step. The idea is, beginning with bringing together the different sensors, thus known as sensor fusion, this will create a super sensor. This super sensor could recognize depth, motion, detect objects and even see in the dark.

Incredibly difficult algorithms would be required in order to accomplish this for such a system and have never been created in totality. NVIDIA sees this challenge as the ultimate high-performance computing problem…the ultimate AI problem and they think they can solve it. NVIDIA has several thousand dedicated engineers working on this and will devote the next several years to meeting the challenge to build a system that is better than humans when driving themselves.

Jensen is mindful that NVIDIA is not just building a chip (GPU) or building an AV system but an AV computer. “NVIDIA is not a chip company we are a computer architecture company, a software company, and we care that the software will run on different computers for a long period of time so it can be improved which means the fleet will just get better, safer over time.”

The entire transportation industry should be able to take advantage of NVIDIA’s investment to create the future with autonomous vehicles. The development of vehicles has come first, but this is just a start as AV and AI begin to rapidly revolutionize multiple industries including healthcare, gaming, and entertainment being just some of them.

UP TO THE TEST

As autonomous vehicle development is proven to be incredibly complex and safety is paramount, the demand for testing intricate scenarios is on the rise. Testing certain scenarios are a challenge to the safety of the occupants and the surrounding environment. Therefore, developers turn toward simulators to test vehicle capabilities in a controlled and safe environment. The challenge then becomes the necessity of creating competent simulation. In what can best be described as a ‘circle of life’ NVIDIA is using its history and proficiency in the gaming world to provide capable simulation for the testing of autonomous systems. Based on the experience of simulating realistic gaming environments, NVIDIA is using its expertise to create a realistic simulated environment and create a variety of challenges to test capabilities. Rendering an accurate artificial environment will allow companies to safely test systems and component’s enabling them to speed the development and safely tackle this complex challenge. It’s difficult to predict if and when autonomous vehicles will become available but is obvious that NVIDIA is and will play an important role in the ongoing development of the future of mobility. 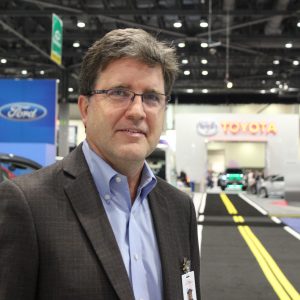 Charlie Vogelheim has over 30 years of automotive industry experience, including roles as VP at J.D. Power and Executive Editor at both Kelley Blue Book and Motor Trend Auto Group. He is the principal of Vogelheim Ventures. through which he is involved in a variety of initiatives including “The Flying Car” radio show and podcast bearing witness to the transformation of transportation. Charlie is often a featured speaker at automotive seminars, educational meetings, and media presentations. Add to the list: Gonzaga University graduate, commercial pilot, and former Alaskan bush pilot.