On Sale February 1, Get Yours Before They’re Gone 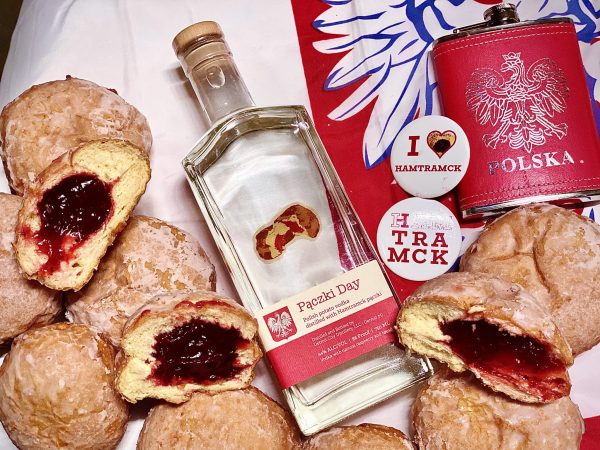 Fat Tuesday is right around the corner! This means Detroit City Distillery’s limited-edition, highly-praised, Pączki Day Vodka will be available next week, beginning February 1. Bottles of the craft polish potato vodka distilled with dozens of raspberry pączki from the historic New Palace Bakery of Hamtramck can be purchased are $30 each.

For the uninitiated, pączki (plural) or pączek (singular) are rich, filled donuts in various flavors enjoyed on Fat Tuesday before Lent. Pączki resemble donuts but are made with an enriched dough that often incorporates eggs, butter, and milk, as well as vodka, which limits the absorption of fats during frying, keeping the exterior crust crisp.

The idea for Pączki Day Vodka was created by Steve Orzechowski, Distiller at Detroit City Distillery, in 2017 when he had a dual craving for his favorite glazed raspberry pączki and crisp polish vodka. “Steve’s whole family is of polish descent and they always go to Hamtramck for Pączki Day. He wanted to try to capture the Pączki Day party in a bottle, along with the revelry and comradery of polish culture,” says Michael Forsyth, Detroit City Distillery Co-Owner. “What started as an experiment has become a cultural phenomenon in Detroit.”

The distilled vodka started off as something small and experimental for friends and family for the party in Hamtramck. “But, as more and more people tried it and loved it, and the requests came pouring in, we realized we’d created something very unique. It’s a real honor to create something that the community has made part of the celebration and the comradery of the day” says Orzechowski.

In 2020 the distillery amped up efforts to provide the pączki vodka to those coming from far and near for the beverage. As the product become

On launch day, two thousand revelers arrived, forming a line that stretched for more than three blocks and stayed that way for hours. Many customers wore polish colors (red and white) and sang songs, even though the temperature was in the low thirties. The Distillery sold out of Pączki Day Vodka in just four and a half hours.

Anticipating the need for the Pączki Day Vodka in 2021, Detroit City Distillery purchased a total of 1,296 (108 dozen) pączkis, for the big day. That’s five times the amount than in 2020.

To make the vodka, the distillery sources 100% potato vodka from Poland – perfect for fitting in with the Polish culture. Each batch uses 18-dozen pączki baked fresh that morning from New Palace Bakery, which is then are soaked for 24 hours in vodka inside a 500-gallon copper pot still.

Next, the magic of distillation transforms the pączki and vodka into a crystal-clear spirit that is smooth, buttery, and has a distinct raspberry finish. It is best enjoyed chilled over ice, mixed in a cocktail, or as a pączki chaser.

The Pączki Day Vodka will go on sale online February 1, available for curbside pickup. “It’s great because people can buy it online, come down at their leisure time February 3 through 14 during business hours Wednesday through Sunday” says Forsyth, “We also have amazing swag, beanies, sweatshirts, and t-shirts for customers too. It’s going to be fun.”

This year, the distillery has plans to offer a bottled cocktail, containing Pączki Day Vodka, name the “Polish Daisy”, Forsyth tells us. The cocktail can be purchased for curbside pickup as well.

“We also have a couple of surprises up our sleeve, and we are getting increasingly more excited to share as the day approaches.”