Photos of Nothing by Photographer Christian Alexander Gerard 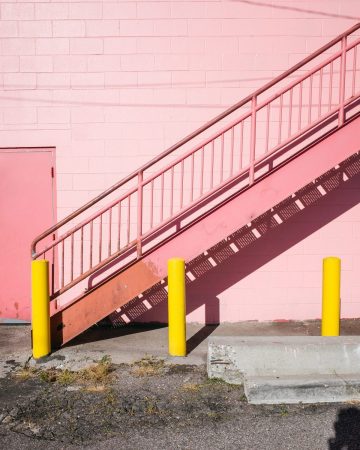 Photographer Chris Gerard is Christian Alexander Gerard. You think you know someone until you realize you’ve had their name wrong the whole time. You think you’ve got someone pegged as one thing (solid product photographer) until another thing emerges.

In the case of the latter, an artist who we foolishly never saw, or looked for frankly, in photos of lattes, cocktails and real estate.

Photos of Nothing is Gerard’s two night solo show at Medicina Urbana—”A series of photos that celebrates the naturally occurring compositions within the urban and suburban environment.”

In it, we find an eye for design and sacred intimacy with the banal that is pleasing to absorb. These photos give us the kick in the gut satisfaction that comes with the discovery that one is capable of far more than you’ve ever imagined: being one of our hands-down-favorite photographers.

We love Photos of Nothing and are thankful to Chris for taking time to chit chat about them.

CV Henriette: Origin story? How long have you been photographing nothing?

Christopher Alexander Gerard: It’s hard to say. I became aware of them about a year and a half ago after a few friends pointed out a pattern to my work. While looking back through the archives for this show, I realize I’ve pretty much always been drawn to these little lesser noticed vignettes.

CVh: Can they really be photos of nothing? Is it possible to capture nothing?

CAG: I actually think about this a lot. There’s something that instinctually triggers me to record this little piece of our environment. Even though I call them photos of nothing, there’s something there that keeps grabbing my attention. What that something is, I’m still trying to figure out.

CAG: Exact inspiration can be hard to nail down since I can’t say that I really think too hard on how I shoot these photos. It really is just a situation where I mostly let instinct take over. Having said that, I often find myself trying to live up to fellow documenters of nothing such as William Eggleston and Saul Leiter.

CAG: Even though I’ve long been attracted to these spaces, ever since I’ve given the project more attention, it’s helped me to appreciate all that’s surrounds me. There really is beauty to be seen everywhere you go, if you’re just paying attention.

CAG: This kinda connects to my last answer: one of the best things to come out of this is discovering how my photos have helped others learn to appreciate their surroundings more. Just tonight, my friend Savannah told me that she’s started to see a lot of the world as a series of photos I might take. I love that!

Photos of Nothing opens and closes THIS weekend at Medicina Urbana, with two nights of party.

Featuring cocktails from Castalia as well as sodas from Casamara Club and custom BonBonBons! Music provided by Ryan Spencer of Portage Garage Sounds.