News Flash: Pickups Are Not Just for Farms Any More 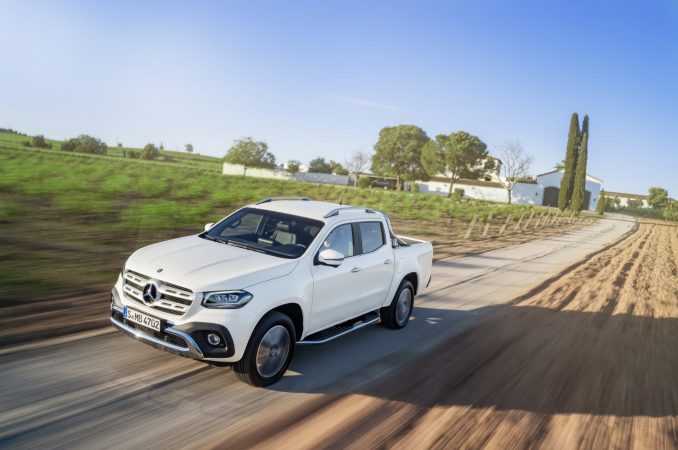 In the battle to dominate the luxury market, brands like Mercedes-Benz have been racing to fill every possible product niche, but the new X-Class is still likely to take Mercedes loyalists by surprise, marking the first time its familiar tri-star logo has appeared on a model of pickups.

The X-Class is loaded with the sort of upscale amenities, from its heated seats to its high-line audio system, one might expect of a classic Mercedes sedan. The pickup segment “is ripe for a premium vehicle,” much like the SUV market was, not that long ago, said Dieter Zetsche, the head of Mercedes-Benz and CEO of the brand’s parent, Daimler AG.

While Zetsche is right about demand for luxury pickups, the reality is that Mercedes is already late to the party. Late last year, Ford introduced the new Super Duty Titanium, a nearly $100,000 take on its familiar F-Series model. And both Chevrolet and Ram intend to nudge into similarly exotic territory with the 2019 remakes of their Silverado and 1500 models, respectively.

If your idea of a pickup is a stripped-down cargo hauler found at a construction site, well, you’re missing the full picture. Sure, you can find a basic version of the Chevy Colorado for just over $20,000, but the average pickup sold in the U.S. these days goes for nearly twice as much. That Super Duty Limited, with its two-tone leather seats, premium stitched leather-wrapped steering wheel, armrests and instrument panel, Miko suede headliner, hand-finished dark ash wood trim, and lots of electronic toys starts at $87,100 and nudges close to $95,000 when fully loaded.

“Everyone wants these loaded-out trucks,” said Sandor Piszar, the truck marketing manager at Chevrolet. “They offer just about everything you can get in a luxury car – and they can haul and tow.”

In fact, if you’re going by price, Ford is the best-selling luxury brand in the U.S., Chevrolet not far behind, thanks to their trucks. No wonder Mercedes wants to get into the pickup market – though, for now, it has not committed to selling the X-Class in the States.

If the German maker decides to enter the American pickup market, it will be facing an expanding list of competitors. Toyota and Nissan have long dominated the midsize segment and are battling to take down Detroit’s Big Three, who still control the full-size pickup market. Then there’s Tesla.  CEO Elon Musk has been hinting about a pickup for some time and said in a series of tweets that he is “dying to build it.” The basic design has been something the South African-born entrepreneur said he’s been working on for almost five years. One key difference: his will be all-electric.

This isn’t the first time pickups have increased their appeal to non-traditional buyers. But, in the past, demand by the “urban cowboys” has tended to dry up whenever fuel prices have surged. That’s less likely to happen now, say analysts like Dave Sullivan, of consultancy AutoPacific, Inc. He notes that fuel economy has been growing nearly as fast as the amenities manufacturers offer.

More than half of the F-150s Ford now sells come with V-6 engines and one of those EcoBoost powertrains actually tops the cargo and towing capacity of Ford’s classic big-block V-8, even while delivering better mileage. The Dearborn manufacturer will add an even more fuel-stingy diesel for 2019 that is expected to get at least 30 mpg on the highway. Nissan and Ram already have “oil-burner” options for their full-size trucks, and Chevrolet will offer a diesel with the 2019 Silverado, as well.

For those who want even more fuel efficiency, there’s also an expanding line-up of midsize trucks to choose from. That segment all but vanished early this decade, and conventional industry logic was that Americans, used to the mantra, “bigger-is-better,” were happy with full-size pickups. Then General Motors got back into the game with all-new Chevrolet Colorado and GM Canyon models. And sales exploded, GM now chasing down segment leaders Toyota, with its Tacoma, and Nissan, with its Frontier.

Honda has also returned with a new version of the Ridgeline. It’s the only pickup on the market to use a car-based crossover platform to improve both ride and handling.

This year’s North American International Auto Show brought the return of the Ford Ranger. It’s been six years since Ford shuttered its Twin Cities plant in Minnesota and dropped the midsize truck. In the U.S., that is. But it actually launched an all-new Ranger for much of the rest of the world. And now, it has updated that truck for the needs and desires of American buyers.

“As transaction prices continued to grow for full-size pickups, we saw an opportunity,” said Todd Eckert, Ford’s Truck Group Marketing manager. “We think this is an opportunity to bring back some of our former Ranger customers and get new buyers.”

Fiat Chrysler is also looking at the opportunities in the mid-size segment, though CEO Sergio Marchionne cautioned at the NAIAS that his company hasn’t yet come up with a profitable reentry plan.

Don’t be surprised to see even more players target pickup buyers looking for something smaller than the likes of an F-150, however. Hyundai does little to hide the fact that it is working up a production version of the wildly popular Santa Cruz concept that debuted in Detroit a few years ago. At the other extreme, Mercedes-Benz. It initially said it wasn’t going to bring the X-Class to the States, but in recent months, Zetsche and other execs have been wavering, admitting they are testing the market for potential demand.

One thing is clear: demand for pickups has been surging and there’s little sign things are going to slow down any time soon – not when manufacturers are readying a tidal wave of new offerings from small to medium to beast-size.