Preservation Detroit in Full Swing for Cemetery Tours Across the City 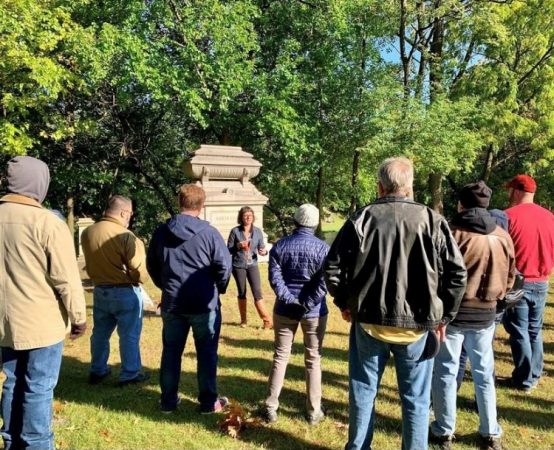 Do you love to get into the Halloween spirit, but aren’t particularly fond of the spookiness of haunted houses? Come join an attentive crowd for Preservation Detroit’s Cemetery Tours 2021!

Get your tickets for these history-infused October tours.

Detroiters missed out on last year’s tours due to COVID-19, but they’re back! Now’s the time to indulge in some brisk autumn air while strolling through a scenic route filled with legendary figures who called Detroit home. Note: Tours will be held with strict COVID-19 safety protocols in place to ensure safety of guests.

Get In the Halloween Spirit While Also Helping Detroit

Tour-takers will dive into Detroit’s oldest cemeteries, home to remarkable public figures like Aretha Franklin and Rosa Parks. The best part is, all tour revenue benefits the nonprofit, which is dedicated to preserving Detroit’s architectural heritage.

Here’s a breakdown of these historic cemeteries:

First up is Elmwood Cemetery located on the eastside of Detroit. Its significance lies in the fact that it used to be the site of a massive battle in 1763 called the Battle of Bloody Run, an attempt to break Pontiac’s siege of Fort Detroit. Dedicated in 1846, Elmwood was Michigan’s first nondenominational cemetery; one of the first racially integrated cemeteries in the Midwest; and later was redesigned by noted landscape architect Frederick Law Olmstead to instill a calm contemplation of nature. It is the final resting place of mayors, governors, veterans of every war since the Revolution, abolitionists, and innumerable notable Detroiters, including Gov. and Sen. Lewis Cass, Mayor Coleman A. Young, radio personality Martha Jean “The Queen” Steinberg, guitarist Fred “Sonic” Smith of the MC5, and Bernhard Stroh, creator of the Stroh’s family of beers.

Mt. Elliott was consecrated in 1841, making it one of Detroit’s oldest cemeteries. Not to mention, it’s dedicated to the large Catholic community in Detroit.  It serves as the final resting place for many generations of prominent Detroiters and everyday citizens Mt. Elliot was established not long after Michigan achieved statehood. Several of the city’s earliest European settlers were re-buried here after being moved from the original St. Anne’s church cemetery. Descendants of Detroit’s early French settlers, including the Campau, Beaubien, Chene, Palms and Moross families, as well as members of the Irish, Polish, Flemish, and German immigrant communities, are represented with monuments to their esteemed dead. Detroit Mayor Jerome Cavanagh, the Schoenherr family, the Van Dyke family, and many noted businessmen, politicians, lawyers, and judges, and clergy were laid to rest here.

Mt. Olivet is the largest cemetery in Detroit. It was consecrated in 1888 and is home to stately oaks as well as many large family mausoleums. As the burial spot of choice for numerous generations of families on Detroit’s east side, Mt. Olivet is a serene resting place and a significant monument to nearly one and a half centuries of Detroit history. You’ll hear stories about the famous and the infamous including Mafia bosses and Titanic survivors.

Woodlawn Cemetery on the north side of Detroit, along Woodward Avenue near 8 Mile. This cemetery is the final resting place of many of Detroit’s notable citizens. From the eccentric Dodge Brothers to the Queen of Soul Aretha Franklin. Woodlawn is truly a sight to see with its incredibly extensive area coverage. It’s no surprise these precious grounds have welcomed an array of Detroiters, including Mayors Hazen S. Pingree, James Couzens, and Albert Cobo; auto magnates Roy Chapin and Edsel Ford; businessmen Frank Hecker and J.L. Hudson; civil rights activist Rosa Parks; plus numerous Motown, gospel, and hip-hop stars, entertainers, and sports figures.

Please note tours will be held with strict COVID-19 safety protocols in place to ensure safety of guests.

Hear stories behind the famous (and infamous) while soaking in the gorgeous art and architecture of the mausoleums and headstones.

When: Tours are offered each Saturday throughout the month of October.

Ticket Info: Detroiters are highly encouraged to reserve their spots ASAP. Only advanced tickets are accepted. Purchase at https://preservationdetroit.org/cemetery-theatre-tours.

Tickets are available until 6 p.m. the Friday before the tour or until sold out. The price is $20 for Preservation Detroit members and $25 for nonmembers.

Guests: Please arrive 15 minutes before the start of the tour. All tours take place regardless of weather. Comfortable walking shoes are recommended. Tours last three hours.