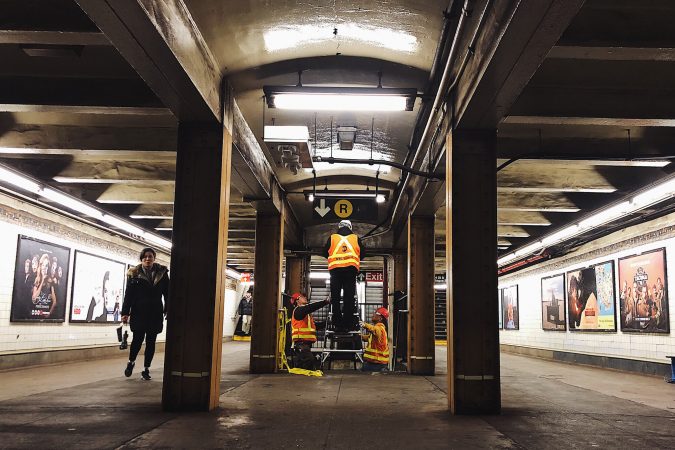 Public transit, a term most Detroiters may liken to the slow-moving Q-line on Woodward Avenue, or the at-one-time-innovative People Mover System that snakes it’s way high atop  Downtown Detroit. While Detroit’s original streetcar system was dismantled for good on April 8, 1956, other cities such as New York, Chicago, and San Fransico kept theirs, and in the time since there are lessons Detroit can learn when looking to improve what transit can look like for the region.

Speaking at the Forbes 30 Under 30 conference in Detroit last month, Natalia Quintero, Director of the Transit Tech Lab, talked about the importance of public transportation in emerging global cities. Working with the MTA in New York City, the group aims to address the woes of modern American public transit, in one of the most congested cities in the world.

“The Transit Tech Lab is the first public initiative of a winder public-private partnership between the MTA and the Transit Innovation Partnership. The Transit Innovation Partnership is an initiative that is leveraging private sector resources and expertise to help improve New York’s public transit system,” said Quintero. “The way we want to reach that mission is by identifying key challenges that transit agencies have at any given year, and we work to come up with innovative mobility solutions that can address them.”

Two of these critical concerns looked at were bus speeds in the city, and delays on the subway system and whether there were more to effective ways to communicate challenges to riders. To find the solution to these problems the organization went beyond the standard methods of testing and worked with Remix, the startup working to transform transportation modes in cities, to utilize new software to better understand the issues.

“When you first think of increasing bus speeds in the city, you think dedicated bus lanes, or increasing the number of tickets that goes to cars that block them,” Quintero said. “But, the thing we explored was what it would look like to use software that is focused on creating bus routes that are dynamic and responsive to the needs of New Yorkers.”

Using Remix and its new methods towards urban planning, The Transit Tech Hub was able to avoid the painstakingly slow traditional ways of looking into the planning of bus routes.

“Part of the NYC Transit President’s agenda for the next five years includes redrawing the bus lanes of NYC from scratch. What this looks like without Remix is that you have a blank map of the streets, and getting color markers to draw bus routes and then debating about the colors on the map,” she continued.

While working strictly with the MTA in New York, the issues and solutions that the Transit Tech Hub works with are not exclusive to New York, and in fact, Detroit could learn ways to improve its own mobility needs.

For starters, despite all the talk of autonomous vehicles, scooters, and drones, Quintero believes that any emerging global city that is seeking to address it’s public transit concerns should instead focus on its tried and tested systems. This point takes both the environmental aspect and human needs into account, working to curb emissions while simultaneously moving as many people as possible at a time. 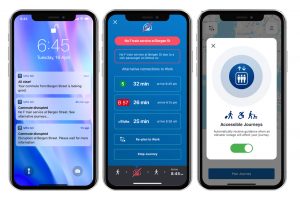 THE AXON VIBE APP, ONE OF THE PROPOSED SOLUTIONS TO SUBWAY DELAYS IN THE MTA. PHOTO BY THE TRANSIT TECH LAB

“I’m a strong believer that the future of transit is still based on effective public transit. If you think of autonomous vehicles, like a private vehicle, you can fit five people in it, and that’s its maximum capacity. You can transport thousands of people on the subway. So, if you think about moving millions of people in an efficient and timely manner, then investing in public transportation and infrastructure allows more people to move simultaneously.”

While easier for cities with an already established transit system, new technology like Remix can be used by cities like Detroit to allow for a smoother transition toward more public transit, and it can also help to improve the current systems already in place, such as the public bus lines.

When asked what a city like Detroit can do to address its mobility challenges, Quintero stated, “My recommendation for any city that’s looking to address any kind of mobility challenge would be to carve out a space to pilot new solutions to existing problems and to have the flexibility to evaluate if they work. I think Remix is a really fantastic example of a solution, it’s a 21st-century tool that might be part one of a way to improve bus services in a city like Detroit that is so expensive and has so many challenges that New York may not have.”

DETROIT AND ITS CAR CULTURE

Detroit’s nickname is The Motor City, and overcoming a culture that loves its cars may be one of the main obstacles to establishing an efficient transit system in Detroit. Yet, a shift toward more individuals becoming more thoughtful of their environmental impact, and a shift to sustainable development, Quintero believes that a time will come soon when more Americans begin to shift toward wanting more shared transit options.

“There has been this romantic vision that we’ve built around cars and the American identity. I think uncoupling this for individuals, cities, and our entire country is going to be a big mental paradigm shift. Potentially, a focus on sustainable solutions and sustainable transport will be what ushers us into a new paradigm of shared mobility, and shared transportation methods are simply more efficient than private vehicles,” she stated.

Detroit has a long way to go before its regional transit system is comparable to that of cities like New York City. But, with organizations such as the Transit Tech Lab and Remix, it could be a matter of time, and innovative thinking, before the city may one day have an efficient transit system that works for all Detroiters.

The Transit Innovation Partnership is still accepting applicants for its 2020 accelerator program, a partnership that utilizes startups to solve public transportation challenges. Those interested should apply before November 30th.