Can Theater Reform Michigan Prisons? Shakespeare in Prison is Betting on it 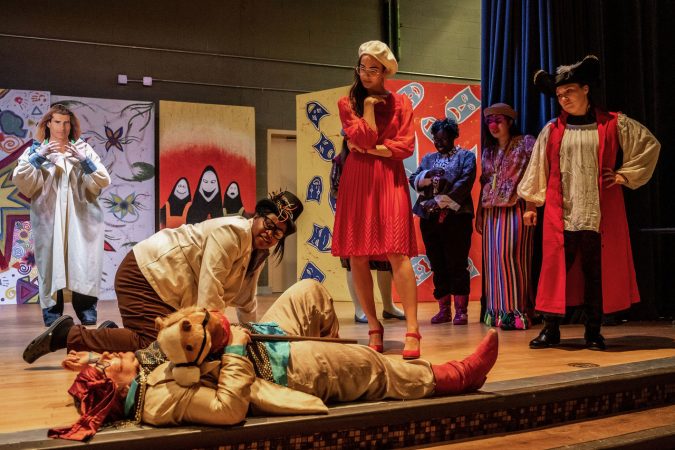 Think about a Shakespeare performance, and we typically don’t think of it occurring within the walls of a prison. But that’s exactly what’s taking place at the Women’s Huron Valley Correctional Facility, and it’s been happening since 2012.

The program – designed to empower incarcerated and formerly incarcerated people to reconnect with their humanity, gain confidence, self-esteem, and crucial skills they need to heal and positively impact their communities – runs through the Detroit Public Theatre.

While the core of Shakespeare in Prison’s (SIP) programming is its work with incarcerated women, it has also included programs at youth detention centers, a men’s prison in Jackson Michigan. In 2018 SIP extended its mission to include those who have been released with a program called Shakespeare Reclaimed, offering alumni ongoing mentoring for personal and professional development and support post-release.

Detroitisit spoke to the founder and director of the program, Frannie Shepherd-Bates, about the impetus behind it, the vision, and the outcomes. 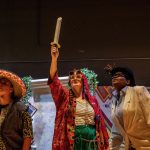 Tell me about Shakespeare in Prison?

It starts with the question, what is Shakespeare? That’s what we collaboratively work to figure out.

What the program boils down to is using Shakespeare as a catalyst for empowerment which means something different for everyone. We don’t teach we facilitate. I call it being radically collaborative, with a focus on shaping the program together.

We facilitate nine-month seasons focused on one play. We read the play aloud, analyze it, discuss it, cast rehearse and perform it collaboratively.

And Shakespeare in Prison now includes post release program so that members can continue working together to mentor or even work as paid contractors.

How did Shakespeare in Prison come to be?

I have a Bachelor of Fine Arts in – what I call – pretend. It’s actually an acting degree from Wayne State University that also touched on theatre for social justice and the oppressed, which I took great interest in and sought more information on post-graduation. In school, I learned that theatre entertains but it can also do so many other things too.

Not long after graduating, I started a theatre company called Magenta Giraffe in Detroit with a strong social justice imperative.

Along the way, I discovered a documentary called Shakespeare Behind Bars. I was so moved and inspired by the way the people in the program were able to make connections with the text and each other that helped them think of themselves as more than their state ID numbers. and turned them from numbers to real people.

Ultimately, I went to the Women’s Huron Valley Correctional Facility and they were open to the idea of trying Shakespeare in Prison. I wrapped this program into the Magenta Giraffe and started it. 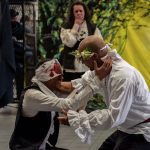 I went in and said, how do we do this together? If I had tried to dictate it myself, it would not have worked. I had to be open to what we collectively needed and then look at how we could make it happen versus sticking to a set curriculum or lesson plan.

In 2015 as Courtney Burkett, Sarah Clare Corporandy, and Sarah Winkler were building the foundation of the Detroit Public Theatre, Winkler – who had become an SIP Facilitator two years earlier – and I began to discuss combining forces. It was such a natural fit on all levels, SIP transitioned to the DPT and I dissolved the Magenta Giraffe.

You are now in year 11 – what has been the evolution?

Initially, it was just me and an ensemble of ten women and a zero-dollar budget. I figured if it worked, maybe I’d find some funding. I thought it would be a side gig – a volunteer gig. I never imagined it to be my full-time job. So, it evolved for me and I have evolved as an artist and a person.

In 2018 the post release program became a huge part of SIP, especially during COVID. When we couldn’t go into the prison, we worked with alums who advised us on how we could still make an impact. We sent activity packs to ensemble members to maintain connection and make sure they knew they were not forgotten.

We are always refining the program – together.

And now, being part of the Detroit Public Theatre is truly a match made in heaven.

How do people get chosen for the programming and how many are in each ensemble?

The culture of the prison is at once rigid and chaotic, so we expect attrition. We have people being paroled, people choosing to go back to school or who obtain a job. Typically, over nine months we have between 32, and at most 45 ensemble members.

Some people stay in the group for years.

I read that you see people in their totality and not as defined by their worst mistakes. Please elaborate.

People who have committed felonies are identified by a number or their last name. They are looked at through the lens of their crime. They are fully defined this way. Even after they get out of prison, they are relegated to being second-class citizens. There is a box to check if you committed a felony. Life is still difficult.

We go in and shake their hands and make eye contact and call them by their first names. We treat them how we would treat anyone in a professional environment. We are not there to judge or forgive, we are there to take people into the group in their totality. And then work together. This helps to affirm their humanity.

When working with theatre you have to approach each character with empathy. You are forced to reckon with the characters and their flaws. We can’t tell the story if we just define the characters by what they have done. As we go down this path of approaching characters with empathy, the ensemble members start to understand they don’t have to define themselves simply by what they’ve done or the mistakes they’ve made. 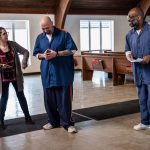 It’s also about them finding ways to trust one another in prison and creating a space where trust can be built within this larger space where it’s hard to feel safe.

All of this is really helpful.

This is the most fun aspect. And it’s really important because Shakespeare has the potential to do damage. Shakespeare comes with so much power culturally and can be taught in ways that could perpetuate harmful cultural narratives.

The thing is the dude has been dead for 400 years.

So ultimately when it comes to interpreting Shakespeare “correctly” it’s really a “who knows”. It should be completely open to interpretation.

In school, we are taught how to think about Shakespeare with little room for our own interpretation. This turns people off.

So we sit in a circle and I say, look, this dude has been dead for 400 years and people are still performing his plays, so there are lots of ideas when it comes to interpretation. Given this, what do we all think? 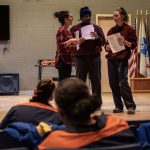 This makes it so much more interesting. It takes away the intimidation factor and brings in creative thinking.

I’ve learned so much from people who are approaching it from their lived experience and not from what someone told them in terms of how to think about it.

When we make Shakespeare fun and make it ours it brings the barriers down and blows things wide open for people.

Are there any specific examples you can share of the growth of an ensemble member you’ve experienced?

There are so many. But one person comes to mind. This is a person who was in the group for a long time. She had had a tough life. When she joined the group she had some communication issues and some conflicts.

As a group, we set out to help. We worked toward settling conflict through collaboration. Over time, she became amazingly skilled at conflict resolution. She started writing. She became a playwright and directed two plays. She wrote a memoir and poetry. She made a great friend in the ensemble and they went on to start a production company.

In your opinion, what’s the most important aspect of SIP?

It is the affirmation of humanity. It all comes back to that. It’s a community that exists to affirm the members’ humanity.

As I said before, these people are defined by things they are ashamed of. They feel less than. In our group, you are more than the mistakes you’ve made. There is hope that comes from knowing you are human. From knowing that you are not evil and you have a purpose.

What do you get out of it?

We will be going back into the prison soon. We need to figure out what it looks like post-COVID. We built the foundation together, but it’s been a while and we’ve experienced a pandemic.

We are also working with the alums on a new evaluation tool based on ways the ensemble members can evaluate their own work.

Long term, the program will continue to be responsive to the needs and wants of the ensembles. The vision is to remain committed to the philosophy of collaboration and openness.

And ultimately, we will continue to affirm the humanity of people in prison, challenge assumptions society has about them, and drive the concept of seeing people in their totality, not for mistakes they’ve made.