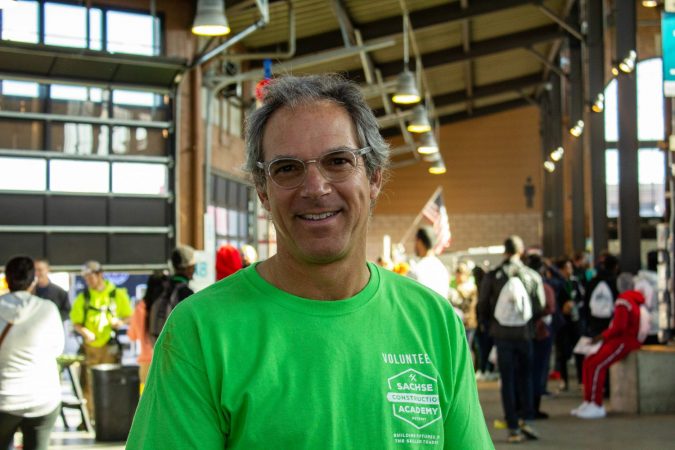 The Sachse Construction Academy returned to Eastern Market last week, for its fourth annual exhibition aimed at promoting skilled trade opportunities for Detroit high school students. The afternoon which had over 500 juniors and seniors attend, was aimed at opening up more students to the value that comes from pursuing a skilled trade.

The man behind the magic, is Todd Sachse, CEO, and Founder of Sachse Construction. Originally starting off as a one-time event to celebrate the 25th anniversary of the founding of his business, the academy grew to something much larger.

“The Sachse Construction Academy started as an idea to celebrate our 25th anniversary, it was supposed to be just a one day, a one time thing, and we said we’d invite a bunch of high school juniors and seniors in the city, bring a bunch of our trade partners, and we’ll show them what it’s like to be a skilled tradesman” said Sachse. “We got incredible feedback from the students and the teachers, they left asking when its happening again next year. We went “Oh, I guess we have to do it again next year”, and now, it’s been four years.” 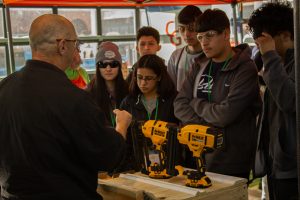 The afternoon presented students with the opportunity to learn about a wide range of skilled trades, from operating heavy machinery, to painting, to the basics of working as an electrician, students were offered hands-on opportunities that allowed them to try out many of the tasks they could one day make a career out of.

“It’s a great experience, it gets better every year, and I’d say we get better at putting it on every year,” said Sachse. “The purpose of it is really quite obvious, we want to introduce these young men and women to an opportunity. If two people walk out of here today, out of the five hundred that attended, and say they’d love to be an ironworker or a carpenter, then it’s a success, that’s all that counts.”

Sachse stressed the importance of learning a skilled trade, citing that it presents one with a lifetime of opportunities, and the ability to take up work just about anywhere in the U.S..

“It is a lifelong skill, something that, in my opinion, is transferable,” he stated. “Whether you’re in Detroit, Kentucky, Miami, or New York, it’s a skill you can take anywhere. It’s a forever skill, and people don’t realize how much money they make. The average carpenter, electrician, or plumber, can make more money than the average architect.”

What sets this year’s Academy apart, is the partnership that Sachse Construction has with Detroit at Work, an organization within the city committed to helping Detroiters find work. After the afternoon was over for students, the partners of the Academy remained in Eastern Market for a job fair that offered Detroiters, aged 18-25, the chance for on-site employment working a skilled trade. 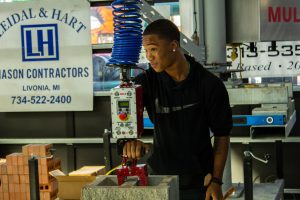 A STUDENT SMILES WHILE TAKING PART IN THE SKILLED TRADE WORKSHOP AT THE SACHSE CONSTRUCTION ACADEMY. PHOTO JOHN BOZICK

Explaining why skilled trade jobs are so important to the Metro Detroit Region, Sachse stated, “The reality is, things are not happening in the Detroit Metropolitan Area as fast as they should, and it’s costing more money, which is actually stymying our productivity and growth, it’s basically not allowing it to happen as quickly or productively as should be expected. We need these skilled young men and women, and I gotta say we’re doing this for both selfish and selfless reasons.”

Continuing, he stated, “Selfishly, in order for us to succeed in our business, we need people to join the skilled trades. Selflessly, we want to show people an opportunity, a different path and the opportunity for a great career.”

As students passed between the workstations learning more about the skills, a look of excitement was on their faces almost the entire outing. As they climbed into a fork load or tried their hand at drilling holes and working a saw, Detroit’s students had fun while learning skills that they could one day use to establish a stable career.

It is this idea of creating an engaging workspace and having fun with what you do that Sachse stressed when asked what his career has taught him about being a boss.

“You need to engage with the team members, it’s not just business, it’s personal, you need to create an environment where people can thrive, you need to have fun,” he said. “If you think about it, people spend the vast majority of their waking hours as adults at work, so I kind of feel its on all of us, not just myself, but on all of our team members, to create an environment that’s fun and interesting, and offer careers that people love to do.”