From Federal’s to Mammoth, This Retailer was Known as Detroit’s “The Saving Place” 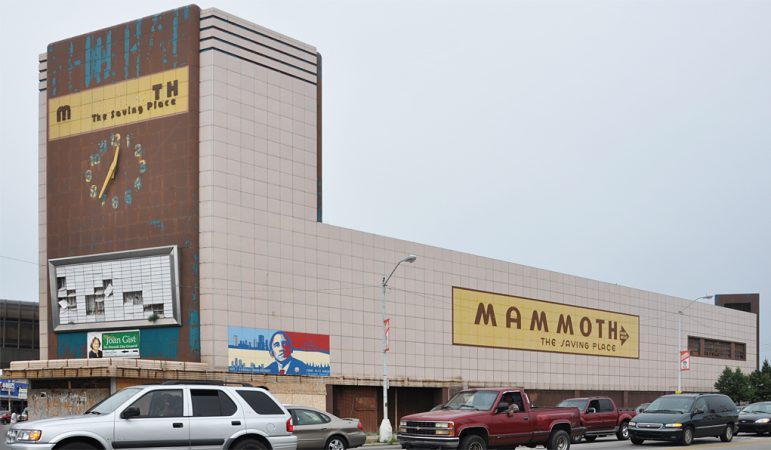 On the corner of Grand River Boulevard and Greenfield Road is an empty shopping center, whose distinguishing factors are its yellow signage and pedestrian bridge.

The yellow is a result of its last reincarnation as Mammoth Department Store, Mammoth, “The Saving Place,” which closed in 2000.

The building was originally built as Federal’s Department Store in 1949 and designed by architect Charles Agree. That’s the same architect who designed the legendary music venue Grande Ballroom and as well as the Whittier Hotel, among other Detroit treasures.

Over time, the pedestrian bridge was added, Federal’s closed, and sometime before the yellow streaks, Detroiturbex.com tells us this happened:

“In 1977 a businessman by the name of Steven West commenced a hostile takeover of the Federal’s chain, succeeding in 1978. West dropped the first two letters off of Federal’s name, renaming most locations to Deral’s Department Store. However, the location on Grand River was renamed “Ed’s,” with the non-pertinent letters removed from the exterior signs. Ed’s closed unexpectedly in December of 1980.”

Yes, someone bought Federal’s and renamed it Darel’s. Could there be another fate for a discount retailer?

We also enjoyed the Abandoned blog post on the matter.