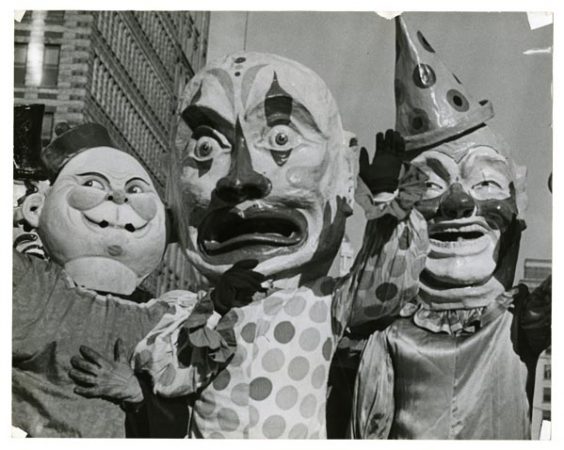 Facebook Instagram Twitter Youtube Envelope
This Thanksgiving, as you’re watching the Lion’s probably lose again from the field or family room, there’s still one way you can console yourself. Because when it comes to parades, your city is a winner! Well, almost a winner. Detroit and New York City and are tied for the title American’s Second Oldest Thanksgiving Parade. Philadelphia holds the top spot for America’s first Thanksgiving Day Parade.

Now known as the Dunkin Donuts Parade, it was originally hosted by Gimbels department store back in 1920. The parade was originally a marketing tool to kick off Christmas shopping. When the idea took off, retailer J.L. Hudson followed suit four years later.

The birthplace of America may have been early to the parade, but they were late to secure the title. Detroit—not NYC or Philly—is officially home to America’s Thanksgiving Parade. Proving once again, Detroit is beating everybody.

BACK TO THE ROOTS

The history of Thanksgiving is long and complicated, and, well, sensitive. Unfortunately today we will be fast-forwarding through most of that.

This annual feast of gratitude has been celebrated since the Pilgrims landed in what we now call the United States of America, known in Pilgrim speak as “The New World.”

The first Thanksgiving dinner took place in October 1621, as the Pilgrims celebrated their inaugural harvest in their new home, thanks no doubt to their native friends who showed them the ropes. According to accounts by attendee Edward Winslow, 53 Pilgrims and 90 Native Americans showed up to the party. It lasted three days.

In the years that followed, the Pilgrims and the Native American’s relationship was not marked by the same harmony. However, the tradition of the feast endured—albeit, in a loose, nonuniform fashion, with the harvest festival being adopted and celebrated by cultures across the land.

First, President George Washington proclaimed the 26th of November as “a day of public thanks-giving.” But it didn’t stick. And for whatever reason, President Jefferson chose not to observe the holiday. Which, wasn’t officially classified as a holiday until 1863 by President Abraham Lincoln, in the hopes of uniting people during the Civil War.

And this is where the story gets good.

Well over a decade after U.S. department stores commercialized the harvest feast, Franklin D. Roosevelt changed the holiday from the fourth to the third Thursday of the month. His rationale? To boost the Depression-era economy by giving shoppers a bigger window between Thanksgiving and Christmas.

The new date was widely rejected by the American public, and, after a two-year hiccup, the President acquiesced. And in 1942, Congress officially proclaimed the Thanksgiving holiday to be the fourth Thursday of November. Again.

One hundred years ago, both Detroit and New York City were booming. This was the jazz age, the roaring twenties, the drunken times of the Prohibition. A time of gangsters and innovation.

Detroit in 1924 was the Purple Gang. It was evening gloves and getting dressed to shop at Hudson’s downtown. This was the year the glorious Book Tower opened to the public.

A decade earlier, Henry Ford had revolutionized the auto industry with the $5 a day wage, and mass production made owning a vehicle a realistic dream for many Americans.

Yes, history is complicated, but sometimes it’s ok to paint in broad strokes.

Today, Macy’s Thanksgiving Day Parade gets a lot of attention for NYC. But Detroit and NYC’s celebrations were on par—included in that their respective sponsors, the rival department stores.

Since the beginning, Detroit’s Thanksgiving Day Parade has been an almost unbroken tradition—there were two years during WWII when the parade was suspended due to the war effort and a materials shortage.

In the time since Detroit’s first Thanksgiving Day Parade, the city has seen the closing of its sponsor, J.L. Hudson and brought on a new one Ford Motor Company. The city experienced a mass exodus of retail from the city, fires, bankruptcy—a lot happened. And yet, on Thanksgiving day the city has never been too broken or bummed for a joyous celebration in the streets.

On Thanksgiving day, we celebrate that which has never left. We march in the cold to a parade that has been this city’s heartbeat during its long hibernation.