Did You Know There’s a Tale of Two Markets in Eastern Market? 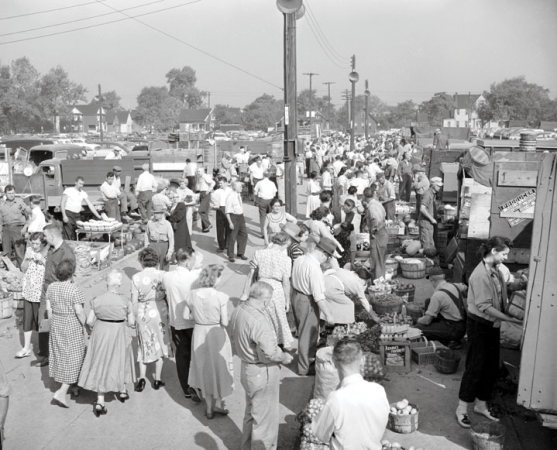 In the beginning, there was one. In 1941 a Farmer’s Market opened in downtown’s Cadillac Square. Soon after, in the 1950s, this market was split into two: An Eastern and a Western Market.

Both markets grew—although one noticeably quicker than the other. By 1924, Eastern Market was known as the “largest farmer’s market in the world,” according to an unknown Internet source, but we’ll take it. Today, Wikipedia says it is the largest historic market in the US. Regardless, we don’t need facts to quantify the awesomeness of our cherished market.

Western Market grew too. Just not as dramatically. When it comes to markets and many things in life, it’s not about size, People. Western Market, although perhaps not as splashy as its Eastern counterpart, served as a point of commerce for its neighborhood. In the days when cars were more luxury than utility, proximity to your food source mattered.

And then this story ends as the Wizard of Oz begins: with the Fisher Freeway slamming down on Western Market on some unsuspecting day in 1965.

Except the market wasn’t evil, as neither was, we’ll argue, the witch. Nor were they alone in their fate: we can think of more than one Detroit district or neighborhood that faced sudden demise by a freeway.

Which is to say, next time you find yourself driving down I-75 through Corktown, just think “If this was a market, I could be enjoying it right now.”