Shelby’s Head Chef and Bartender Talk Future, Hobbies, and How to Find Your Dream Job 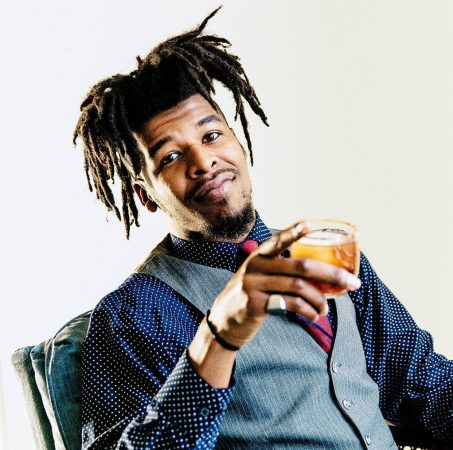 It’s a lovely thing to enjoy the hospitality industry once again, even if remnants of COVID-19 restrictions continue on. For Shelby, a new speakeasy and hidden gem in Detroit’s financial district, this means looking to a better future for everyone in the industry and for their customers. Shelby’s head chef, Matt Tulpa, and head bartender, Andre Sykes, speak to their hopes for the industry’s future, their hobbies outside of work, how to find your dream calling, and their favorite attributes of the new place they call home.

WHAT WOULD YOU RECOMMEND TO THOSE WHO HAVEN’T FOUND THEIR PATH OR DREAM JOB YET?

Tulpa: “Aside from the blanket answer of ‘everybody’s different, so you need to figure it out on your own,’ aside from that, I would say try everything. I think I used to dwell on the fact that up until I started cooking I was kind of like a jack of all trades, and I was interested in everything and I had my hand in everything… and didn’t really know which direction I was going in as a kid and… as a teen.

“I just did everything and eventually the cards kind of fell into place and everything that I was interested in kind of culminated into a discipline once I decided on a discipline…. Explore your interests. Explore all of them.”

Sykes: “Today’s age, we want to be great, we want to be good as soon as possible, and we want to find what really motivates us as quickly as possible so we don’t feel like we’re wasting our time doing menial jobs or things that’s not in our best interest. But I think something that is very, very important to not only remember but reconcile with is that it’s a cliche, it’s a very cliche notion, but all things in due time. 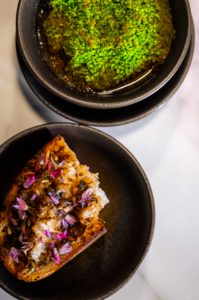 WHAT IS YOUR FAVORITE MEAL OR DRINK TO MAKE OUTSIDE OF SHELBY?

Tulpa: “I really like making rice…. It’s just rice and water and…. It’s just super simple, and sometimes after, like, cooking so much you kind of have palette fatigue so I just want something simple like rice and egg.” 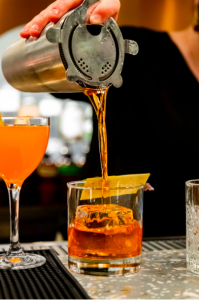 WHAT IS YOUR FAVORITE PART OF YOUR DAY?

Tulpa: “It’s been a little bit of a struggle to find a daily routine since, you know we have a 10 month old at home, I mean we’re more focused on his routine, but he’s helped at least me find a routine, so I would say, you know, if it’s on a work day my favorite part in the morning is taking him out for a run or just spending time together before I go in…. That and making coffee.”

Sykes: “My favorite part of the day, well first and foremost, is waking up. You never know when your last day is here. But I would have to say talking to my daughter. Unfortunately, my daughter has been in Canada with her mom since the whole pandemic started and they closed down the borders, so every day I video chat her and talk.”

IF YOU COULD PICK ONE SONG TO LISTEN TO FOR THE REST OF YOUR LIFE, WHAT WOULD IT BE?

Tulpa: “There’s an artist nicknamed Mason Jennings and for whatever reason, I’ve just like really found his music really interesting and diverse and intriguing, so it would probably have to be a song of his called “Sing Out.”

Sykes: “The song that inspired me so much, and I love so much that I also titled my book of poetry the same, its “Car Radio” by Twenty-One Pilots. I love that song. It’s seen me through a lot of darkness and a lot of depths when I was drowning so that song will always, always, always have a very, very special part in my heart and in my ethos as well.” 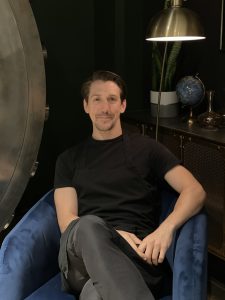 THE FOOD INDUSTRY IS CHANGING, WHAT ARE YOUR HOPES FOR ITS FUTURE?

Tulpa: “That’s a really tough question because there are a lot of things that I really love about the industry and the business and other things that I don’t recommend to put it politely…. I’d like to see consumers pay the actual cost of service and hospitality in restaurants and I say that because I think the pandemic and people being let go from their jobs or, you know, choosing to not go back to work… if they are being paid unfairly, they have, I feel like, more of a voice to tell the restaurant/bar whatever “hey like, this is what’s fair.”

“Owners are in a tough spot because that may not fit into the budget…. Owners may not feel that customers are willing to pay higher prices to support all the costs of a restaurant.”

Sykes: “We’re right on the cusp of a really, really great move for the industry. We are bringing new faces in, fresh new ideas, new ways to do things, it’s a time of experimentation, it’s a time to get good, its a time to work hard and develop your technique so that in two years when we’re as close to back to normal-pre-COVID as we possibly can be, we [have] already been running basically like that since the middle of COVID.

DO YOU HAVE A CREATIVE OUTLET OUTSIDE OF BARTENDING?

Tulpa: Not necessarily a creative outlet, but running has been the only thing that I do, that I’ve done longer than anything, so I’ve been running, you know cross country since I was 11 years old and after high school switched to… ultra marathon, so that’s just been my other discipline outside of cooking.

Sykes: Absolutely. Poetry…. For me poetry is, well my general consensus about poetry is, you know, it’s the lifeblood… art in itself is the soul of humanity. 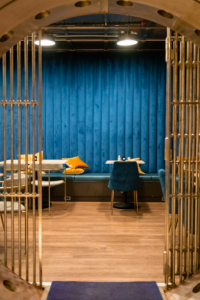 WHAT IS THE BEST ATTRIBUTE OF SHELBY?

Tulpa: I haven’t seen many other places around here that have equally as good drinks, food, and service as Shelby, and ambiance. I think each of those things are on par with each other and everybody is still, you know, pretty hungry to… hold that standard and keep growing from that.

Sykes: “I would have to say that when you come in it kind of feels like home, you know? …We are just here to make sure you have a good time while having extraordinary cocktails and extraordinary food at the same time.”