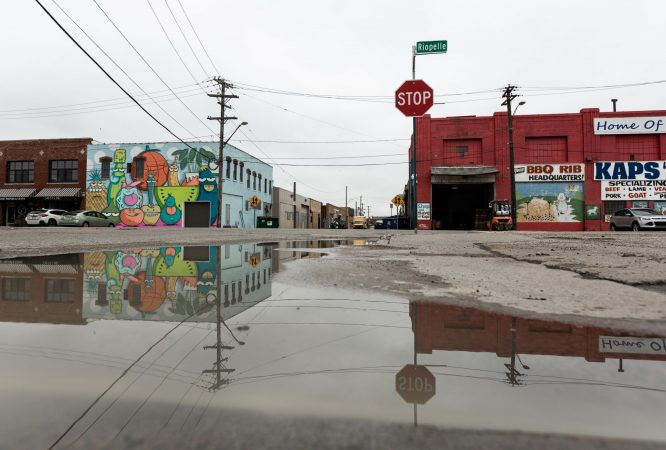 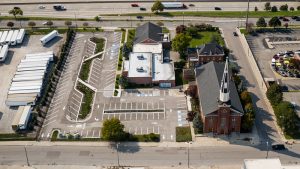 Flooding is something that the Detroit region is no stranger to. In the area near the Detroit River, a changing climate and strong winds have contributed to high waters along the river, while further from the river around midtown and downtown, aspects like stormwater contribute to flooding in areas with large swaths of pavement and concrete that don’t soak up rainwater as well.

When looking at flooding due to stormwater and surface flooding in the city, the Sacred Heart Church in Detroit’s Eastern Market— first built in 1875 — stood out as an example for years. Concrete cracked with moss growing about, puddles often accumulated, growing into large swathes of standing water with nowhere else to go but into the city water system.

Working to address the problem of surface flooding in cities like Detroit, global nonprofit The Nature Conservancy [TNC], which operates in over 70 countries, and all 50 states, took on the task of revitalizing the parking area of Sacred Heart Church as a green infrastructure project. The renovation in Eastern Market is just one aspect of the broader conversation around stormwater management in Detroit.

THE TROUBLE WITH STANDING WATER IN DETROIT 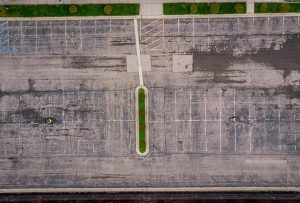 Working in Detroit for about six years now, TNC supported the Detroit Water and Sewage Department and nonprofits in working to address stormwater management using more nature-based solutions. According to TNC, one of the issues with stormwater in Detroit worsens due to the nature of the vast infrastructure network built decades ago, a network that now struggles due to its age.

Working in Detroit for about six years now, TNC supported the Detroit Water and Sewage Department and nonprofits in working to address stormwater management using more nature-based solutions. According to TNC, one of the issues with stormwater in Detroit worsens due to the nature of the vast infrastructure network built decades ago, a network that now struggles due to its age. 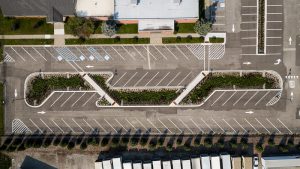 “In Detroit, you have aging infrastructure that was built for a peak population back in the 50s of about 2 million people. Today, there are less than 700,000, and that population decline has left behind a lower tax base, as well as 23 square miles of vacant land that still houses that infrastructure beneath the ground so that infrastructure still needs to be cared for and repaired and all of that and so we just have a really leaky system,” stated Valarie Strassberg, Detroit Urban Conservation Director at the Nature Conservancy.

“As a result, we end up with this system becoming overwhelmed when there’s heavy rainfall or intense rainfall, and when the system gets overwhelmed, you end up with overflows combined with sewer overflows into the Detroit and Rouge River, as well as surface flooding that affects neighborhoods and streets and sidewalks and occasionally homes. So those are all the challenges that the Nature Conservancy’s Detroit work is focused on,” Strassberg added.

In 2018, the City of Detroit’s Post-Construction Stormwater Ordinance was approved by the Board of Water Commissioners and the Detroit City Council, requiring new developments to manage runoffs. While working as a technical advisor for the city, TNC partnered with nonprofits like the Eastern Market Partnership to come up with long-term development green infrastructure projects that take into account matters such as stormwater management.

Working with the city and the EMP, TNC received funding from the Ralph C. Wilson, Jr. Foundation, which was then used to fund project management and coordination needed to retrofit the Sacred Heart parking lot into a piece of green infrastructure. Using plants, trees, and permeable surfaces to help capture and slow stormwater runoff, the Sacred Church project alone will prevent an estimated 1.5 million gallons of water from surface flooding and sewer overflow caused by rainwater.

Looking green and lush, the parking lot’s design doesn’t just cut down on standing water and stormwater flow. It also has benefits for the community around it, proving greenery that can cut back on aspects like urban heat.

Specifically, green stormwater infrastructure is what it’s called, added Strassberg while discussing the project. Using that green infrastructure as a way of managing stormwater also provides all the additional benefits of greenery and beautification like cooling, urban heat island effect, the kind of cooling just has a whole host of cooling benefits for the community members, and then neighborhood residents, visitors, etc.

Sacred Heart’s parking lot design was technically a retrofit, which means when looking at future projects of a similar scale in Detroit, the cost will be cheaper if green aspects are factored in during the original development. While a lot of the work at Sacred Heart involved peeling back land and pavement, a new project could implement similar storm management systems at a fraction of the cost, something not considered much in Detroit before the passage of the 2018 ordinance.

“Had the same projects been done as part of a new build, it could have been up to 50 percent less expensive. That’s a really big deal when thinking about showing what’s possible for new developments in the city that are going to potentially even anchor institutions like a community center, or, you know, new public spaces like a new library or even private developments where you have either affordable housing,” added Strassberg. “These are all things that are not new to Southeast Michigan, and they’re not even new across the nation, but they are new in Detroit because it’s not something that the development community has been required to do until just recently.”

Looking to the future, TNC is continuing to work with the Eastern Market Partnership in the greater Eastern market area to ensure that new developments are properly utilizing green infrastructure aspects when building new developments. Learn more about what’s on the radar for Detroit and the rest of Michigan at the Stories in Michigan tab on their website.

For the latest on all things Detroit and more, be sure to subscribe to our newsletter.