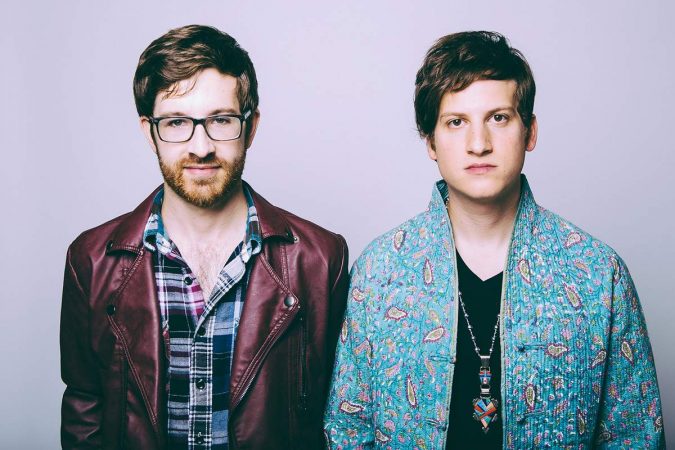 Synthpop duo Great Good Fine OK has done a lot of things, but the most recent thing they’ve done is make an album entitled GGFOUR that we’re really, really, into, which made our conversation with singer Jon Sandler extra exciting!

We talk Phish and coney dogs with the Brooklyn-based musician. We also talk about Justin Bieber, but those are b-sides. It was a thrill.

We did not speak to Luke Moellman, but we imagine he is equally good at conversation.

CV HENRIETTE: ARE YOU FAMILIAR WITH THE DUELING CONEY ISLANDS?

JON SANDLER: Is that a hotdog thing?

JS: I know that because I’m a huge Dax Shepherd fan, and he’s always talking about it.…he’s gotten into it about which hotdogs are best.

JS: What do you call it?

JS: Which is your favorite?

CVh: *silence* WHAT’S AN INSTRUMENT YOU WISH YOU COULD PLAY?

JS: I can piano a little bit, but I wish I was a lot better at it.

JS: That is very hard because I’ve seen thousands of shows…

JS:I love going to Phish shows. Are you familiar with Phish?

CVh: YES. THIS IS FASCINATING.

JS: Yes, this is fascinating to a lot of people. I’ve been to a lot of Phish shows. Some of those are at the top of the list for me. I was able to see some special ones.

CVh: DO YOU HAVE A FAVORITE PHISH SONG?

JS: *excited* Are you a Phish fan?

JS: *laughs* That’s such a hard question because they have thousands of songs.

CVh: AND DON’T THEY JUST GO ON? ISN’T THAT THE THING?

That just made me think—they have a song called Reba, R-E-B-A. That song has one of my favorite jams. I like to listen to Reba, and I like to jam along on the guitar when they get to the jam section. It’s really long.

I like to listen to it on Spotify. It was my number one and number two most listened to song because I listened to two different versions.

JS: I like it black. I went through a period when I was drinking lattes with soy milk. But if it’s not a latte, I drink coffee black.

CVh: NAME SOME OF YOUR MUSICAL INFLUENCES.

CVh: HOW HAS MUSIC SHAPED YOUR LIFE?

CVh: WHAT IS YOUR HEADPHONE ONLY MUSIC?

CVh: THAT OR YOU ENJOY LISTENING TO IT WITH HEADPHONES.

JS: I’m not really ashamed of any music...When I’m around Luke and listening to music, maybe I’ll be wearing headphones if I’m listening to Phish. Because he doesn’t like Phish.

JS: I’m working on a new song, and the melody of it is stuck in my head, pretty much on loop.

CVh: WHAT SONG DO YOU CRY TO IN THE SHOWER?

JS: I don’t do much crying in the shower. I sing a lot, but it’s usually stuff I’m writing. I come up with a lot of good ideas in the shower, but I think everybody does.

Have I ever cried in the shower? Yeah…I’m gonna have to do an NA for that one.

CVh: No! THOSE ARE GREAT ANSWERS!

JS: I like to do operatic stuff in the shower.