Takeaways of Success from Duggan’s State of the City Address

In His Eighth Address as Mayor, Mike Duggan Talked Jobs, Equity, and More From the Stellantis Mack Assembly Plant 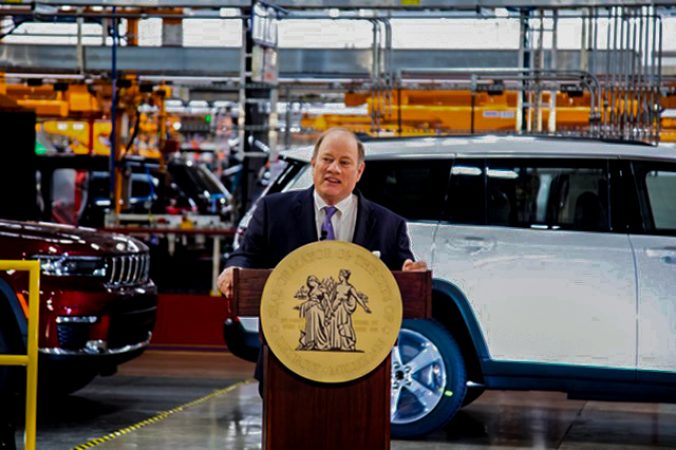 Speaking from the new Stellantis $1.6 billion Mack Assembly Plant, Detroit Mayor Mike Duggan delivered his eighth State of the City address, where he approached a multitude of topics from vaccines to gun violence and employment to housing.

Standing inside the new plant, Duggan touted the successful transformation of location from an empty lot to the “first American auto assembly plant built in America in the last 15 years, north of the Mason Dixon Line.” This point was one of the first successes for Detroit that the mayor would mention during his hour-long address.

Let’s breakdown some of Duggan’s key points, as he discussed the state of Detroit heading into the Spring of 2021.

Already talking of the new Stellantis Mack Assembly Plant, Duggan praised other developments happening in and around Detroit from the Big three Auto Manufacturers in Detroit.

Bringing up the new jobs brought into the city over the past few years, he praised the Ford Michigan Central Project for the prospects it will bring to Detroit. He also thanked GM for reversing their decision on closing the Poletown plant in Hamtramck while briefly mentioning the new advanced assembly plant deemed Factory Zero.

Today, we’re ensuring that opportunity is available for all Detroiters. This means having reliable transportation for Detroiters. We have to continue to get rid of redlining. #SOTC313 pic.twitter.com/TO323P7fkT

While jobs are nice, getting to them is often a challenge in Detroit. Sharing that he wanted to speak honestly about the problem, Duggan brought up the fact that many in Detroit do not have access to a vehicle due to a multitude of factors.

“Here’s what we believe, in America, talent has been evenly distributed, but appetite has not. as your city of Detroit government, we believe it’s our responsibility to fight that inequality,” Duggan stated while reading the mission statement that defines how his administration approached every decision.

According to the data presented by the mayor, 25 percent of all Detroiters do not have cars, while when he took office in 2014, 1/3 of all DDOT busses sat in garages. In an effort to address this, Duggan announced that 80 new busses would be added to the existing lines so as to ensure people in need of work can get to their jobs.

He also brought up the fact that Michigan’s Driver Responsibility fees hit poor Detroiters disproportionally and that car insurance rates for Detroiters are disproportionately high. Both aspects, Duggan shared, were addressed through bipartisan efforts he helped to lead in Lansing.

Duggan also touted the success of Detroit’s Clean Slate project, which has so far helped to expunge the criminal record of 700 clients while helping those that it did to a 23 percent wage increase.

Building off the opportunities available, Duggan also brought up that Detroit cannot truly be a city of opportunity if its children do not have a chance for a college education. Thus, he talked first of the success of Wayne State’s commitment to providing free four-year tuition to all Detroit students accepted before bringing up the Detroit promise program.

As part of the scholarship push, any Detroit resident graduating from a high school in the city will be eligible for a two-year scholarship to a community college. For those with at least a 3.0 GPA and a 21 on the ACT, Duggan shared that the city will also provide a four-year university scholarship.

“This is what city government everywhere should be doing,” stated Duggan. “How many times have you heard people talk about diversity and inclusion? What we believe in the city is that talking about it has value, but acting has a lot more value and we are committed to act.”

Since the program started, over 1,200 Detroiters are attending college with support from Detroit promise. The program is also in it for the long run, as Duggan shared shares of all property taxes in Detroit will be used to fund the program permanently.

We lobbied until we were sure that the City received their fair share of Marijuana to long-time Detroiters. Today, Legacy Detroiters receive 50% preference to recreational businesses licenses. pic.twitter.com/C1NznmHLku

Sticking to the topic of equity, Duggan also spoke about the unfair situation Detroiters faced after Marijuana legislation passed in 2018. Bringing up the original law that stated medical marijuana businesses had exclusive rights to recreational licenses, Duggan shared that this was unfair to Detroiters, given that only four businesses were owned by people from Detroit.

“There is no greater example of inequity than what was happening in the marijuana business,” Duggan added. “Councilman James Tate deserves a lot of credit for standing up and saying, no, this is not happening.”

As part of the new legacy ordinance from the City Council, Detroiters will account for at least 50 percent of all licensed marijuana businesses in the city.

In order to continue to lead our efforts in employment for all Detroiters we created the People Plan to raise $50 million to create Opportunities for Detroiters left behind. #SOTC313 pic.twitter.com/sI7FuYppb3

Bringing up poverty reduction efforts that Detroit has led the nation in, Duggan shared that they are still not enough. Talking of the People Plan, Duggan talked of how the plan will be raising money for four programs.

The first aspect of the People Plan is a community health corps, which will help families in extreme poverty get on their feet through coordinated services brought right to their door. Secondly, the program is highly focused on high school completion and ensuring all Detroiters have a diploma or GED.

The third aspect is a program that allows those who have a high school degree to earn while they learn new skills through a trade program, which Duggan hopes will raise the standard of living for many.

Lastly, Duggan talked of the Friends and Family Program, which will support those hoping to get on a new track after experiencing a criminal past. As of the date, this program has 160 participants who are supported with meals, mentorship, housing, and other means of support.

We believe we could open eligibility to all in May. In order to achieve this, we must open more centers, today the Detroit Health Department has now administered 120,000 vaccines. #SOTC313 pic.twitter.com/ri3hLnLn79

Expressing regret after comments made last week regarding the Johnson & Johnson vaccine, Duggan stated, “I know I said some things about Johnson & Johnson; it was my fault for not having done more research than I should have.”

“After having done that research, it was obvious that the record Johnson & Johnson has at the height of the pandemic and operating in South Africa and South America and Britain that this is a highly effective shot,” he added.

Following this, he also announced that the city would not only accept the Johnson & Johnson vaccine but would also be opening more vaccine sites. The goal, according to Duggan, is to open vaccine eligibility to every Detroiter by May.

The points included above were just a fraction of the information and success stories that the mayor spoke about during the address and an archive of the speech may be found on the City of Detroit Facebook Page.

Be sure to subscribe to our newsletter for more, as well as regular updates on all things Detroit.