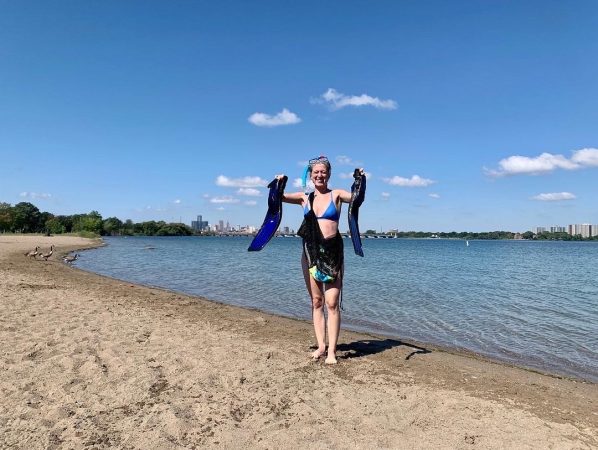 Belle Isle is unique in many aspects to be sure, and offers many different things to different people, but have you ever thought of the island as a hub focused on ocean conservation? Genevieve Rattray does.

“People might think of Detroit as being disconnected from the ocean, but it is not,” says Rattray, Director of Environment Initiatives & Affairs with the Belle Isle Conservancy. “All waterways lead to each other, and plastic pollution happening in our oceans often begins in our rivers and lakes.”

She goes on to say,

Think about someone enjoying Belle Isle on any given day,  using a plastic water bottle. They finish their water and leave the water bottle behind, maybe they toss it in a trash bin. Animals or strong wind comes along and that bottle ends up on the ground, and eventually in the river. There it floats for weeks, months, and even years with the sun shining on it and it releases its chemicals into the water as a result. Finally, it breaks up into microplastics which injure and even kill aquatic life as well as ends up in the food chain, on our dinner table, and ingested by humans. 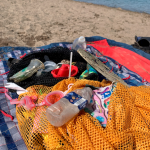 TRASH FROM A CLEAN UP DAY ON BELLE ISLE

It’s a stunning prediction that by 2050 there will be more plastic in our oceans than fish. Through the Detroit River Coalition, Rattray, and many others on both sides of the Detroit River are mobilizing action and connecting our binational region to the global issues of single-use plastic pollution in our waterways.

WHO IS GENEVIEVE RATTRAY?

Rattray has always felt deeply connected to the water. In the early 2000s, during her time at Wayne State University, she was a diver on their swim team as well as worked for the City of Detroit as a lifeguard on Belle Isle. She is scuba certified and has had training as a free diver, both skills she uses for removing litter pollution from local waterways. Her family roots on Belle Isle run deep with her grandfather having worked in the horse stables on the island pre World War II. She dedicated her career to the Detroit-based non-profit sector.

She calls her role with the Belle Isle Conservancy – which began in 2015 – a dream job.

“I’ve always been passionate about ocean conservation, and I don’t want to relocate to California or another ocean-front state as I build my career. My work in Detroit and with the Belle Isle Conservancy has allowed me to focus on what I love in a city that I love. I’m working to further connect Detroit and its waterways, and our Great Lakes region to the global effort of ocean conservation.”

When Rattray began her work on Belle Isle she saw an opportunity to t address ocean conservation at the local level.

The cleanup season is April – October and for half of a decade, she has organized clean-ups on the island on the third Saturday of every month, mobilizing work on not just the land, but in the water with the use of kayaks. Belle Isle Beach cleanups take place on the second Friday of each month.

“There was a lot of interest in volunteering from nearby residents, community groups and local corporations, and we wanted to leverage that support in a meaningful way. Hosting nearly 5 million visitors a year, the park inherently has a lot of litter. So we launched our anti-litter campaign Keep Belle Isle Beautiful, working at a local level to not only keep the park clean but to decrease plastic pollution in the Detroit River.“ 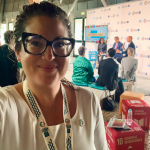 Piloted in 2017, Keep Belle Isle Beautiful has educated thousands on the dangers of plastics and microplastics while preventing and removing tens of thousands of pounds of litter from reaching the Great Lake. Says Rattray, “We have leveraged this program and Belle Isle as a platform to get people thinking globally and connecting the Great Lakes region to ocean conservation. We talk about removing litter at the source, preventing it from polluting the Detroit River, Great Lakes, and the world’s ocean. Together with our community, the impact is local, regional, and global.”

The next step was to collaborate more intentionally with other entities from both sides of the River. April of 2020 marked Earth Day’s 50th Anniversary, so Rattray and her colleagues along the Detroit River began an effort toward “The Great Global Cleanup.” Individuals and organizations worked for a year to plan it, and then COVID-19 happened. “We took a step back, took our group and our efforts and formed the Detroit River Coalition,” said Rattray. The coalition is made up of the following entities currently:

The Coalition’s vision is to bring together and provide a networking platform for researchers, universities, nonprofits, practitioners, environmentalists, artists and activists to network, share details of their work, and be innovated thought leaders, leading initiatives in the region with an overlapping focus on plastic pollution, microplastics and ocean conservation.

Together, in 2021, the coalition removed 25,000 lbs of plastic pollution and other littered items from the Detroit River and its binational coastline.

As for the future, Rattray says, “I want to normalize this behavior and make the connection between the oceans and our region part of the culture.”