The Eagles of Belle Isle 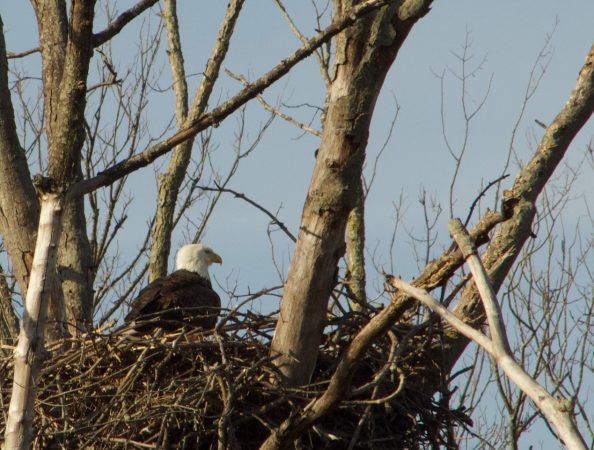 In February of 2018, two members of the Detroit Audubon Society – Rebecca Minardi and Diane Cheklich – discovered what seemed to be the initial makings of an eagle’s nest – called an aerie – in a large tree near Central Avenue on Belle Isle. Their initial observation turned out to be correct, and the pair of bald eagles had three eaglets in the spring that year and has had baby eaglets each spring since.

Typically only one or two Bald eagle chicks fledge per nest, but the fact that this pair raised three is a real rarity and indicates that the habitat around Belle Isle is high quality–they obviously have plenty of fish available for food,

said James Bull, Board Member and Past President at Detroit Audubon Society. 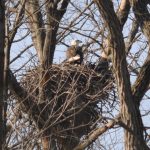 The eagles and their nest have offered birders, photographers, and Belle Isle visitors in cars, on bikes, and on foot a somewhat rare glimpse into these majestic birds’ characteristics and nesting habits. The nest is truly something to behold, and watching for the eagles and eaglets to appear is captivating and enchanting.

Eagles are fascinating birds. For those who have seen and watched them on Belle Isle – and if you haven’t it’s worth the visit – here are some quick facts about some of their habits to put things into context:

Bald eagles are monogamous, even though each eagle may spend the winters on their own. A mating pair will continue to produce offspring every year unless one of the pair dies. When this happens, the remaining eagle will search for a new mate at the beginning of the next nesting season.

• A juvenile bald eagle reaches maturity at around 5 years of age. Bald eagles can live for about 30 years and will raise a new generation every year.

• The female bald eagle chooses who she wants to mate with. To choose her mate, the female will fly with male eagles and will pick up a stick and drop it to see if the male can catch it. If he does, she’ll continue to pick larger sticks and fly higher, dropping the stick for the male to catch each time. If he drops it, she will fly away from him. She will continue this until a male catches the sticks and he’s the one she will mate with for life.

• Once a mated pair have bonded, they’ll start to build a nest. Each year, they may add additional sticks into the nest and also reline the interior of the nest. This continuous renovating of the nest means that eventually, an eagle’s nest can be huge with a diameter of around 6 feet and a height of 6 feet as well. These massive nests can easily weigh over a ton, making them the largest nest of all North American bird nests. 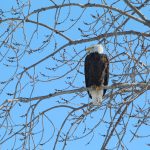 • The female eagle will lay her eggs around 5 to 10 days after mating. She normally lays two eggs sometimes around 3 to 6 days apart.

• Both the male and the female eagle will take turns in incubating the eggs to keep them warm.

• It takes around 35 days before the eggs start hatching. On rare occasions, the female bald eagle may lay more than two eggs but never more than four

• The babies, or “eaglets,” are cared for in the nest for about twelve weeks. Both parents feed them mostly fish – sometimes squirrels, rabbits, and ducks.

• Once they leave the nest, they are on their own for about five years before finding a mate and starting the life cycle again.

• Eagles can fly at very high altitudes – between 10,000 and 20,000 feet above sea level. From this vantage point, their keen eyesight allows them to scout for prey below. 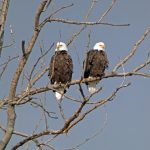 • Eagles can fly at up to 60 miles per hour, however, their average flying speed is around 35 to 40 miles an hour.

Before European settlers arrived, bald eagles were abundant across the U.S. But with settlement came habitat destruction, and the settlers viewed the eagles as competition for game and as a threat to livestock. So many eagles were killed during that time.

In 1940 Congress passed an act to protect the birds.

And then another threat rose up. Starting after World War II, farmers and public health officials used an insecticide called DDT. The chemical – meant to destroy mosquitos and agricultural pests—began to heavily affect birds of prey. DDT caused eagle eggshells to become too thin and thus break. A 1963 survey found just 471 bald eagle pairs in the lower 48 states.

DDT was banned in the early 1970s, and conservationists began to breed bald eagles in captivity and reintroduce them in places across America. Luckily, this species made a spectacular recovery. Now the lower 48 states boast over 9700 nesting pairs. 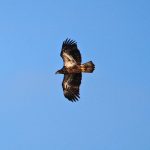 And we have the honor and pleasure of having them in our own backyard at Belle Isle.

Says Greg Norwood, Ecologist and Michigan Department of Natural Resources Steward, “Eagles need a healthy forest, tall trees and abundant fishing grounds to thrive. Belle Isle provides the perfect habitat for these creatures, and we are working on several restoration projects to continue to offer this environment to the eagles and other wildlife.”

Says avid birder and photographer, Ron Spann, “Birding on Belle Isle is fantastic, and the Bald Eagles’ presence over the past couple of years just adds to the delight.”

You can see the nest – and if you are lucky, the amazing creatures themselves – from Central Avenue, .2 miles from Portage Way.