Heard of The Eight Mile Wall? Unearthing its History of Segregation in Detroit

A Now Colorfully Painted Wall, Built in 1941, Separated People of Color from the White Community, and Highlighted the Beginnings of Red-lining

Segregation exists in Detroit. As we take a look at how Detroit reacted to the Black Lives Matter movement in response to George Floyd’s death, and that of others, this past year, we start to depict what future societies will look like and again reevaluate the culture and community of present-day Detroit. This begs the question, how has Detroit moved forward from the segregation divide since the start of the twentieth century?

The story of the Eight Mile Wall in Detroit indicates there have been steps taken in the city to vocalize the need for change within the Detroit community and beyond, although the issue still looms large.

Looking back through history the Eight Mile Wall was also known as the “Birwood Wall,” “Detroit’s Berlin Wall” even the “Wailing Wall,” and was originally created during a time when racial tensions and the already charged issue of housing in the city of Detroit were increasingly becoming worse. According to Culture Trip, the Eight Mile area was particularly bad for redlined African-American neighborhoods and here the Housing Authorities saw the potential for developing white, middle-class communities where the black communities had existed prior. 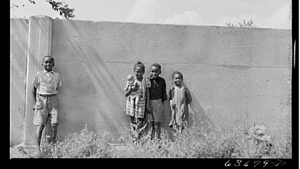 But, why was the wall built in the first place? The Federal Housing Administration (FHA) denied proposals to black mortgage holders in the newly proposed white neighborhood, due to the wall being located too close to an already established neighborhood. Why? The administration believed the location would increase new risk of defaults. Those locations deemed risky were eventually “redlined” on a map, which resulted in the term “red-lining,” making it nearly impossible for African-Americans to become homeowners.

As a result, the Federal Housing Administration (FHA) proposed a solution to enforce segregation thus sending a message separating neighborhoods of people of color from the city’s white residents, according to Atlas Obscura. Spanning a half-mile long and standing six feet tall, the Eight Mile Wall was built in 1941. Only once the wall was built, would the FHA back mortgages for the neighborhood.

The wall stems from 8 Mile Road to Pembroke Avenue through the backyards of houses along Birwood and Mendota Streets, as a true reminder of the racism and segregation, deemed acceptable behavior, further dividing an already divided city of Detroit.

Fast forward to 2020, the wall still remains, but in a different, now colorful version of itself. Originally, the wall stood blank and grey. So, to eliminate the idea of segregation, instead of knocking down the wall, the community opted to repurpose the wall, and the Alfonso Wells Memorial Playground, where part of the wall resides, is now covered with artistic, vibrant murals, to not only celebrate African-American culture but embrace the culture of the Detroit community and in turn symbolize equality and unity. The painted murals include images of Rosa Parks, Harriet Tubman, and colorful houses to symbolize why the wall was built in the first place – people of color were not wanted in the neighborhood. 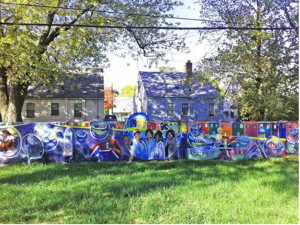 The Eight Mile Wall is now painted to tell this story because while we can’t erase history, we can make new inroads and initiate an effort to not repeat it.

The wall stands as a reminder that segregation is real, just as the Black Lives Matter movement has reminded us in 2020. Though the new murals do not erase the past, it confirms that Detroit is taking steps forward to ensure segregation does not continue to persist in the community.

We challenge you to think about the steps you are taking to make a better Detroit, where everyone is appreciated within the community.