In a War of Words, Donald Trump and Joe Biden Didn’t Do Their Best to Debate Their Ideas Before the Nation 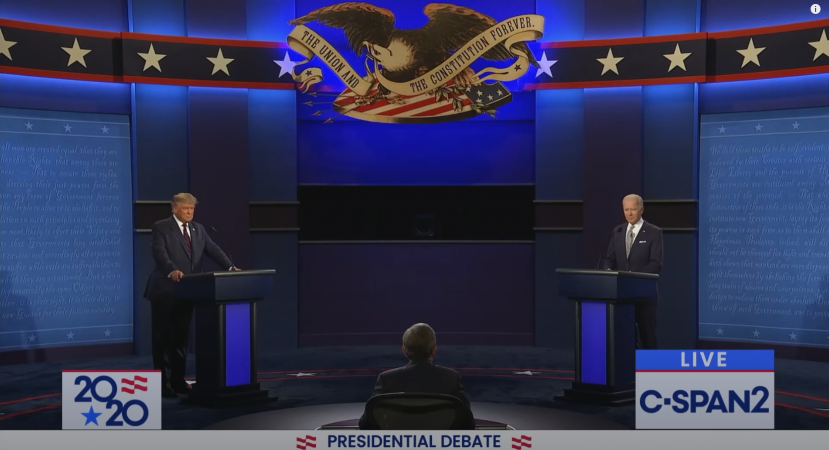 After a wait that seemed to last a lifetime, 2020’s most anticipated meeting occurred; President Donald Trump and Democratic Nominee Joe Biden met for the first round of 2020 debates. With loud interjections, zingers and more question dodging than one could count, the debate between the two presidential hopefuls presented a rather interesting look into an election racked by an economic crisis and pandemic.

Set by the Commission on Presidential Debates, the topics of the night officially included “The Trump and Biden Records,” “The Supreme Court,” “Covid-19,” “The Economy,” “Race and Violence in our Cities,” and “The Integrity of the Election.”

In a night that was excruciatingly hard to follow, both Biden and Trump made their best attempt to show the American people why they should give them their vote. The issue of the night became clear; however, as Biden echoed a bygone era with his attempts to talk basic policy, Trump was loud and unnerving. The result, a night of little policy, and many interruptions met with little pushback.

The following is an attempt to look at what each candidate had to say about the matters that did make it to the stage, such as healthcare, the economy, and COVID-19.

THE DEBATE ON HEALTHCARE AND THE SUPREME COURT

The evening began with a question about Trump’s nomination of Judge Amy Coney Barrett to fill the vacancy left by the late Ruth Bader Ginsberg in the Supreme Court, which quickly devolved into a night of interruption that saw Trump spar with the night’s moderator.

“I guess I’m debating you, not him,” President Trump stated to Moderator Chirs Wallace, after being asked about his inaction in coming up with a replacement of the Affordable Care Act.

On the topic of the Supreme Court, Biden said that the election would serve as a way of allowing voters to voice their say on the supreme court and said the vote should wait until after the election. Trump differed, saying that he won the election and that therefore he should make the choice of who to nominate.

During the exchange, the talk of healthcare was brought up, in which Biden supported expanding the existing ACA and Trump offered no real answer besides talking about how he lowered prescription drug prices, as well as spouting a blatant lie that he made insulin so cheap, it was “like water.”

Going from a primary that saw many conversations about Medicare For All, the debate on healthcare between Trump and Biden ultimately came down to a shouting match. Biden was called a radical “socialist” multiple times and Trump kept interjecting until Biden finally uttered, “would you shut up, man?”

COVID-19 AND THE ECONOMY

In the midst of the jumbled mess of insults and lies, the topic of COVID-19 was brought up by the moderator and Joe Biden used this moment to attack Donald Trump for his inadequate response. The result led to Trump saying “2 million” people would have died if Biden was President. This claim doesn’t really land given the existing death toll due to inaction under the current administration.

After the President brought up his record of him closing China and how it saved lives, Biden talked of how Trump initially praised Chinese President Xi Jinping, a claim that led to the President saying we should believe no country about their COVID-19 case numbers and that America was doing great.

Biden then talked of how the government should be mobilizing to provide PPE and support for people in need, but Trump instantly bit back with a claim that Biden wanted to close the economy and destroy the country.

The moderator then brought up the topic of economic recovery, precisely on how Trump believes we are in a V-shaped recovery and Biden a K-shaped recovery. Asking the Democratic Nominee to elaborate, Biden exclaimed, in a response that echoed a distant Bernie Sanders, that the recovery would only be a recovery for the rich and that the working class and people in small towns wouldn’t recover. A great point that was never met with much of an answer as to how Biden would prevent this.

The topic of race in America also came up during the debate and it seemed to blow the roof off of the little civility that had remained in the night. While Trump blamed racial violence in cities on Democratic mayors, Biden offered no real pushback. At the same time, Trump blatantly brought up Biden’s struggles to gain left-leaning voters, not entirely even talking about the matter of racism in the country.

While Trump attacked ANTIFA, Biden had his most shining moment when he at least had the gumption to tell the President that “ANTIFA is an idea, not an organization.” Around this point is when Trump laid bare where he stands, as when asked to condemn white supremacy in the country, he continued dodging the question.

When asked by the moderator about various hate groups that supported him, Trump was told about the Proud Boys, a violent group of men that have stoked violence on many occasions. His response left no surprise and many questions about its nature.

“Proud Boys? Stand back and stand by,” Trump stated to Chris Wallace, continuing his attack on the nonexistent ANTIFA groups living rent-free inside his head.

After a segment that seemed to the span the entire allotted debate time, the matter of where the candidates stand was laid bare. Trump refused to condemn white supremacy, showing again that he fans the flames of hate. Biden, on the other hand, with all his faults, at least had the mind to address the growing number of white supremacist groups in the country.

After an hour and a half that saw Trump debate both Biden and moderator Chris Wallace, the night came to an end on the topic of voting in November. During this segment, each candidate talked of how they view the integrity of the upcoming election.

Biden urged everyone to vote, vote like their lives depended on it. While Trump, he continued to peddle the same narrative he has for weeks on end, his idea that the election is rigged.

Trump also said that he believes is China more of an election threat than Russia, while Biden said that when he is President, he will punish foreign powers who meddle in our democracy.

The standing point, however, rested in the idea that Trump still refused to commit to a peaceful transfer of power in November, a move he once again echoed during the debate.

In the end, Trump was aggressive, where Biden was too traditional and reserved, two moods that show the stark divide between the two wings of governance in America. The entire display seemed to symbolize the spirit of our country at the moment, one that involves shouting, shouting, and more shouting. With more debates planned in the coming weeks, it’s unclear as to who is watching the argument to learn policy and who is watching for the almost reality television-like display of emotion.

The debate was available for live stream from many outlets, some of which can be found here for those interested in watching the circus act.