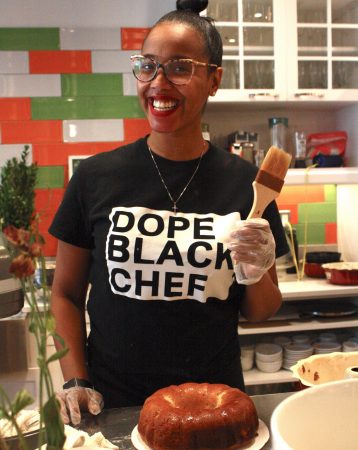 Detroit is coming back. Every day that passes seems to bring something new to the city-wide canvas of small businesses and restaurants. Now, during the pandemic and as the Black Lives Matter Movement continues on, Detroitisit has decided to take a closer look into the individual lives and stories of successful businesses that are black-owned around the city and metro area. In this multi-part series, we hear from individuals well-traveled, born and raised in Detroit, and everything in between, as well as each person’s beginnings, passions, and personal relationships to the Detroit community.

For many of us, the kitchen is our home’s center. It is where our mornings begin with a steaming cup of freshly brewed coffee. It is where our days come to an end and aromatic dinners are prepared. It is the hub of the hustle and bustle of conversation, laughter, and clanking dishes during parties and holidays. It is where family congregates, recipes are shared, and traditions are passed on. It is, in all of these senses, the heart of the home, just as The Kitchen, by Cooking With Que, is the heart of New Center, Detroit.

The Kitchen was spawned from Quiana “Que” Broden’s love for Detroit and a desire to educate the city about food. Her personal journey began when she was diagnosed with Sarcoidosis. She wanted to find natural ways to better care for her body and her illness. Her research led her to veganism, a lifestyle that was a true game-changer for her. Broden’s symptoms began 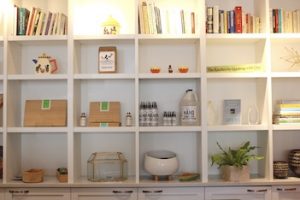 BOOKSHELF WITH RENTABLE HEALTH AND WELLNESS BOOKS AT THE KITCHEN

to fade as she practiced her new diet, leaving her with a passion to share her vegan eating experience with Detroit. “I just want people to eat better so they can feel better,” says Broden. “People walk around with ailments, but they don’t eat for their ailments.”

In 2012, Broden began publishing posts on her blog, Cooking With Que, where she shares her vegan recipes and experiences. Hours after the website became active, Broden received a call from Michigan VegFest, saying their Mac and Cheese vendor dropped out. They asked if Broden would be willing to add her name to the list of caterers with her blog’s featured Mac and Cheese recipe. Broden agreed, ecstatic with the ability to share not only her recipe but her passion with the community.

As the blog grew, Broden decided to open her own restaurant. She wanted a place where she could not only cook healthy and delicious meals for Detroiters but also hold cooking classes where she could teach others how to prepare their own food and cook for themselves. Broden applied for every grant she could find, determined to fulfill her dream. In 2017, The Kitchen came to life, filled with the comfort and homey feeling of any other household kitchen.

The Kitchen, however, wouldn’t be the same to Broden without the location. “I’m slightly obsessed with Detroit,” she says. Broden grew up in the city, went to Detroit public schools, and considers herself to be a “Detroit baby.” When the decision was made to open a restaurant, Broden knew, without a doubt, the location had to be in not only Detroit but in the Midtown area. “Midtown to me is very homey,” she says. “It’s not downtown Detroit where it’s too ‘big city’, it’s homey.” She continues, saying “I always want to feel like I’m at home. Midtown was like that and it matched.” 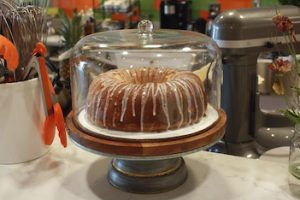 With the idea of a location in mind, she was relentless until she obtained her current location in Newcenter, on Woodward Avenue. “I signed my lease in 2017 and in 2017 it was a desert,” she recounts. When people heard of her location, they began asking why she would want to be there. Broden’s answer was always, “Why wouldn’t you want to be here? I wouldn’t want to be anywhere else. The suburbs have enough, they don’t get this.”

Beyond her love for the city, Broden had a special attachment to the block itself, “My Momma [Grandma] used to get her shoes at Ruby Shoes [across the street],” she says. Broden continues, saying that they would go shopping together when she was little, “The fact that I am on the same block that I used to walk with her when I was little, you can’t even put a price tag on that.”

Broden is truly an advocate for her passion. “I am a disruptor,” she says. She feels the city needs disruptors. People who are willing to deny the status quo and demand healthier living for those who occupy Detroit, as well as teaching and sharing knowledge about health and wellness versus promoting quick and easy solutions like fast food and sugar-laden snacks. Broden believes you get what you ask for, so she asks for a healthier Detroit. She asks for people to pay attention to their diets, put love into their food, and challenge those who do not.

The Kitchen is currently offering curbside pickup only. All cooking classes are being held online, and The Kitchen brings ingredients to your doorstep. The Kitchen is also offering Feed a Team for larger corporations such as hospitals, to serve groups of people in a safe way during the Covid-19 pandemic with individually prepackaged meals.