The Online Revolution Finally Catches up to the New Car Showroom

Looking for a Car? Time to Get Used to Shopping Online 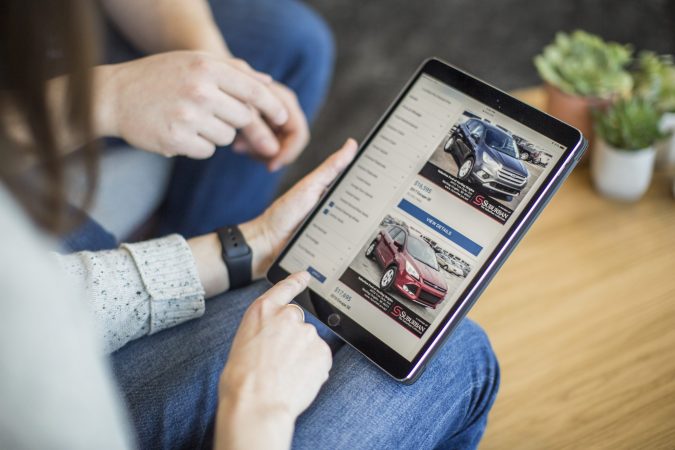 Despite the pandemic lockdowns that impacted most of the U.S. over the last few months, automotive sales remained stronger than many had first feared. Dealers, it turns out, got creative, and found ways to keep moving the metal, even for customers huddling at home.

Chances are that if you, a friend or family member bought a new car, truck, or crossover since last March, you completed most or all of the purchase processes online, rather than at your local showroom — which was likely shut down in Michigan. Even in states without shelter in place orders, the shift online became the norm, rather than the exception – the transformation occurring at a “breathtaking pace,” according to Ford COO Jim Farley.

Though showrooms have now reopened in most of the U.S., the transition appears to be the way of the future, according to industry analysts. Surveys find car shoppers just as comfortable buying a car online as they do a book or the latest electronic gadget. That said, this digital retail revolution could contribute to the loss of tens of thousands of dealership jobs over the coming years.

Even before the pandemic, most U.S. car buyers were going online, typically to check what products were available, read reviews and compare prices. And once they reached the showroom, “They likely knew as much or more about the vehicle they were looking at than the salesman,” said David Cole, director-emeritus of the Center for Automotive Research in Ann Arbor.

While there are plenty of websites helping shoppers get dealer quotes, the final part of the process, until recently, still required a visit to the showroom.

That wasn’t an accident, industry insiders acknowledge. As one dealer told DII on background, “We wanted to retain control of the buying process, and that’s a lot easier to do when you’re talking face-to-face, rather than trying to negotiate on the computer.” 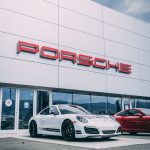 SHOPPING FOR YOUR CAR MAY NEVER BE THE SAME

Many dealers have also fear they could fall victim to what has happened in other retail sectors. A quick visit to the local mall reveals the impact online services like Amazon have had on brick-and-mortar stores.

Necessity won out during the pandemic. In March, as the nationwide lockdowns began, new car sales slid by nearly 40%, J.D. Power forecasting May demand would plunge as much as 80%. That sent, automakers and auto dealers scrambling.

General Motors, for example, encouraged dealers to sign up for its little-known Shop-Click-Drive service. Customers simply have to enter their city, state, or zip code to get a list of local showrooms, each displaying current inventory. Enter a few details, like your trade-in, line up financing, and the entire sales process can play out online. Some states, like Michigan, still require “wet” signatures, but Jim Seavitt, owner of Village Ford in Dearborn, was only too happy to have the necessary paperwork dropped off and picked back up again later.

Since his showroom reopened in June, plenty of shoppers have returned, but he and other dealers are finding they may simply want to see a vehicle up close, perhaps take a test drive, before completing the purchase online.

A new survey by Cox Automotive shows 58% of those who bought a car online found the experience “much” or “somewhat” better than the traditional buying process. Only 6% said it was “worse.”

“We believe (customers) will expect to stay with this way of doing business,” said Cox auto analyst Michelle Krebs, “and may even be willing to pay a little more.”

That’s echoed by Mark LaNeve, head of sales, service, and marketing for Ford, who told DII the shift to online car buying is at least three years ahead of where he otherwise expected it would be. 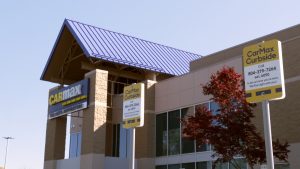 New car dealers aren’t the only ones making the switch. If anything, used-car retailers have more flexibility under state franchise laws, and companies like Carvana and CarMax have been actively pursuing digitally savvy shoppers.

CarMax, the largest used car chain in the country, started rolling out its “omnichannel experience” in December 2018 and expects to have it in place for all U.S. showrooms by next month. The program allows customers to handle parts of the transaction at a CarMax showroom or, if they wish, shop entirely online.

“We recognize the current environment has accelerated a shift in consumer buying behavior,” said CEO Bill Nash. “Customers are seeking safety, personalization, and convenience more than ever in how they shop for and buy a vehicle. For us, this reaffirms that our strategy is the right path forward.”

The question is what will happen at the brick-and-mortar side of the business. Dealers routinely invest millions of dollars in their stores and can have dozens, sometimes hundreds, of employees. All told, there are about 1.1 million Americans employed at franchised dealerships, according to the National Auto Dealers Association, perhaps an equal number at used car outlets.

About 300,000 employees at franchised dealerships were terminated or furloughed due to the coronavirus pandemic. While some are now back at work, the crisis is expected to slam employment long-term.

A variety of factors come into play, starting with the pandemic and the subsequent downturn in the economy. Industry analysts collectively expect new vehicle sales for all of 2020 to come in at 13 million or less, down from last year’s 17.1 million. J.D. Power doesn’t see the numbers clawing back up to pre-pandemic levels until mid-decade.

Add the switch to more efficient online retailing and the business likely will never be the same – especially when it comes to jobs. Total new car employment could shrink anywhere from 5 to 10% post-pandemic, Adam Robinson, the CEO of dealer recruitment firm Hireology, recently told trade publication Automotive News.

That mirrors what has happened in other retail sectors and reflects the fact that online shopping can be quicker, easier, and a lot stressful than buying a vehicle the old-fashioned way.