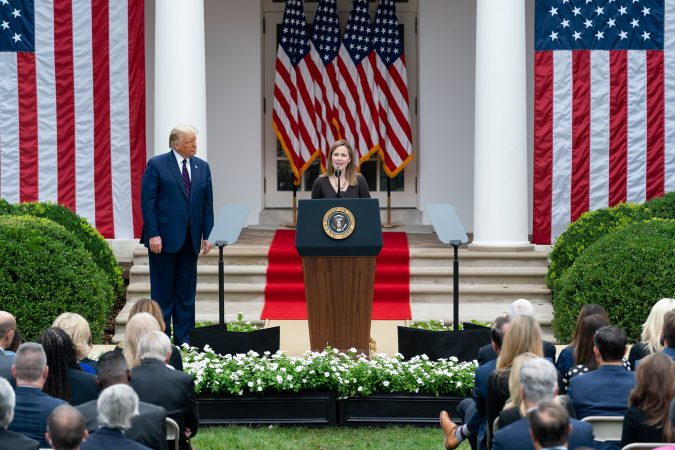 The make-up of the United States Supreme Court has changed drastically with the confirmation of Judge Amy Coney Barrett, bringing a now 6-3 conservative majority to the nation’s highest court. With matters of healthcare, reproductive rights, and the rights of those in the LGBTQ+ community now threatened, the 2020 election stakes have risen yet again.

Talk of expanding the court began almost instantly after the death of Ruth Bader Ginsberg in September, a move that, while not common, is entirely legal within the confines of the constitution. If even semi-progressive legislation stands a chance before “originalists” like Barrett and the new conservative judiciary, the Democratic Party will need to show it has the will to play political hardball and act as a real opposition party.

Before we look into the idea of expanding the Supreme Court, let’s look into Barrett’s record and the reason for concern among left-leaning voices and activists.

Calls for the opposition to Barrett’s nomination have come from groups such as Planned Parenthood, The Human Rights Campaign and The Leadership Conference on Civil and Human Rights. Many have cited her record on reproductive rights and freedom, LGBTQ rights, gun safety and healthcare, among many other matters, as examples of why such a presence on the highest court would be dangerous and harmful for many individuals.

On the matter of reproductive rights, there is a major red flag given Trump’s previous comments about overturning Roe V. Wade. Before taking office in 2016, Trump stated he wanted the ruling to be overturned and the right to abortion to rest in individual states’ hands.

With Barrett now on the court, Roe V. Wade is more threatened than any time in modern history given the history of the new justice’s opposition to abortion. Planned Parenthood cites 17 potential cases that could overturn Roe V. Wade, making the matter of defending reproductive health all the more decisive.

The Affordable Care Act [ACA] is also another matter facing an uncertain future under the new Supreme Court, as Barrett’s record shows she is highly critical of the ACA’s requirement that all plans include birth control coverage.

Additionally, there is no more obvious a confirmation of Barrett’soppositon to the ACA than her condemnation of the 2012 ruling that upheld the legislation.

In a release about Barrett, Alphonso David, president of the HRC, stated, “If she is nominated and confirmed, Coney Barrett would work to dismantle all that Ruth Bader Ginsburg fought for during her extraordinary career. An appointment of this magnitude must be made by the president inaugurated in January. The Human Rights Campaign fervently opposes Coney Barrett’s nomination and this sham process.”

Barrett’s actions to warrant such justified opposition include publically defending dissenters of the marriage equality case, Obergefell v. Hodges, as well as claims that Title IX protections do not apply to transgender people, two matters she brought up while speaking at a Hesburgh Lecture in 2016.

Other matters of concern include accountability for sexual assault, criminal justice, immigrant rights and Barret’s ideological affiliations, all matters which can be viewed in an open letter signed by 150 civil and human rights groups.

Barret’s record is out there for the country to see. While rights groups have been justified in their opposition to Barrett, this opposition has not translated well into a response from the Democratic party. With the party’s opposition push failing on takeoff leading to an increase in support for the nominee, the options remain sparse for the Democratic Party.

Enter the calls to expand the court.

“The size of the Supreme Court is not fixed in the Constitution; it’s up the Congress, it’s changed seven times over our history,” Shared Independent Senator Angus King while speaking with CNN the day before Barrett’s confirmation. “For the Republicans who are clutching their pearls now about “Oh no, don’t talk about packing the court,” in three states, I can’t remember in Arizona, Iowa and I think one other over the last three or four years, the Republicans have packed their courts.”

“The Republicans have broken the rules of the Judiciary Committee; they’ve broken historical precedent by doing this nomination. It’ll be done, eight days before an election when they wouldn’t do Merrick Garland eight months before the election,” he added.

The words of the usually moderate senator hit the issue around Barrett on the nose. While Republicans refused to budge on Merrick Garland in 2016, eight months before the election, the same virtue was not upheld eight days before an election in 2020.

Thus, in the face of such hypocrisy, it should not be out of the ordinary to explore the perfectly justified and legal act of expanding the number of justices to the supreme court, a call already made by progressives such as AOC, Rashida Tlaib, Ed Markey and Barbara Lee.

King’s comments on the legality of expanding the court also stand firm, as the powers to control the Supreme Court’s size restfully in Congress. Thus, if Democrats are willing to play political hardball, they have a slim chance at accomplishing this feat.

Such a move would depend fully on the fact that the Democrats will need to control the Senate, as well as the executive, two ideas that aren’t impossible given the election in the coming days.

With options running slim and time of the essence, the bare minimum many can do at this moment is vote and to call out the blatant suppression and intimidation of votes caused by long lines and armed groups of wannabe soldiers. November 3rd will be a day, unlike many others, ensure you’re prepared with our voter guide.