Davison Freeway to the QLine, Detroit Has Transit Woes and Tales

Detroit Has Views and Opinions on Its Public Transit 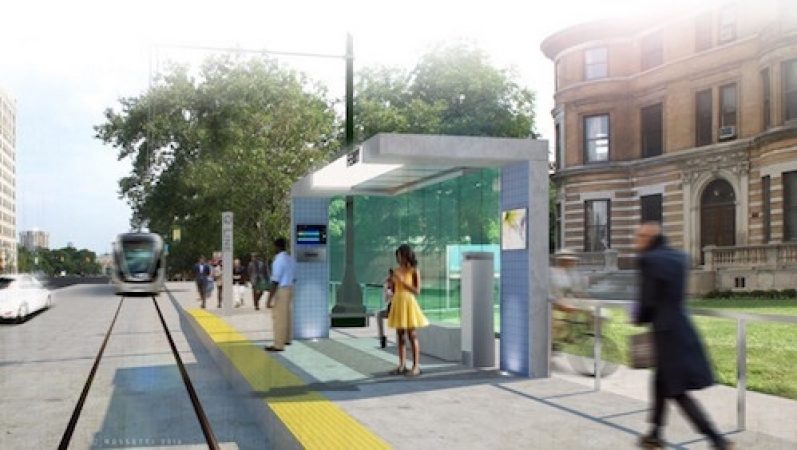 The Davison Freeway to the QLine works as a timeline to Detroit’s Transit History.

Let’s work backwards: most planners and residents are hopeful that the QLine is only the start of a larger transportation system that does more than just spur development. By measure, the $140 million project seems to be a success, but it remains to be seen whether the new light rail shapes Detroit’s identity as dramatically as previous advances to the city’s transportation modes.

“The development is already happening, and it started before they laid the track,” says Carolyn Loh, a Wayne State University urban planning professor. “Once it was a sure thing, people immediately started buying up properties.”

Detroitisit talked to local planning and transit experts and asked for their thoughts on how transportation advancements shaped Detroit and what the QLine, and other proposed changes, like the boulevarding of Interstate 375, might mean going forward.

City of Detroit Planner Director, Maurice Cox, says the city is already officially exploring connecting the QLine to an East Jefferson Avenue line, and the ‘Line is essentially a “foundation” for bigger things.

“It has a catalytic role as part of a larger system, and that’s how I’m viewing it. As with many things in Detroit, you have to give the public confidence that it’s possible, and there is no bigger change in the mobility of Detroit than this reconfirmation of rail based transit,” he shares. “It gives me confidence to talk to stakeholders and investors who want to build on this.”

Before looking ahead, however, it’s worth looking back. There are few cities like Detroit when it comes to traffic and transportation advances. Just consider some of the innovations: Crews installed America’s first mile of concrete roadway and the country’s first three-color stoplight on Woodward in 1909 and 1920, respectively.

The first helix parking garage, built in 1929 next to the historic Fisher Building, provided a key piece to the commuter formula. The region’s streetcar system grew to be the nation’s largest by 1900, although it was removed by 1956. Detroit is also home to the Davison Freeway, the country’s first depressed urban freeway (below the surrounding grade).

When residents began asking for improvements to public transportation in the ‘80s, the city offered up the People Mover, though its access is circular and limited and described by one critic as “Detroit’s best 50-cent tour.”

In the city’s defense, improving the public’s mobility is easier said than done. As several planners noted, there are distinct challenges built into Detroit’s landscape that one doesn’t encounter in east coast or European cities with enviable public transportation systems. Perhaps the largest is the low-density development that makes up the city’s fabric. Detroit holds far more single-family residential homes with front and back yards than high-density row houses and apartment buildings common in coastal cities.

The former arrangement lends itself to sprawl and auto-centric development, and to accommodate that, Detroit built its urban freeways. That trend – copied nationally – is viewed by today’s urban planners as detrimental to the city’s health, says Alex McKeag, program manager for the Chicago-based Congress for the New Urbanism.

“In Detroit, you really got to see what happens when you give a city over to the car. The city went all in on it, and what that meant was carving up the beautifully designed Woodward plan that included a network of connecting streets. It seemed like a good idea, but it had untended consequences for the city and did a lot of damage to the built environment,” McKeag says.

Loh sees it the same, telling Detroitisit that the freeways “ripped the heart out of perfectly fine neighborhoods. We now know that instead of getting people downtown, the freeways allowed people to easily leave downtown,” she says.

In a suburb 20 minutes drive north of Detroit’s downtown, we spoke to Mark Nickita, Birmingham’s mayor and a partner at ArchiveDS, an urban planning firm involved in a wide range of local and regional transportation projects.

He sees the transportation innovations and the “trickle down” developments like the nation’s first shopping mall in Northland as distinctly Detroit phenomena that are the result of the city’s tradition of ingenuity.

“These innovations, like them or not … because some have been detrimental, some have been great advances, they were about solving the problems and the concerns of the day. They were a way to solve the challenges of growing infrastructure needs,” Nickita says.

“That’s an important thing. It differentiates Detroit, and it’s a culture of innovation that continues today.”

As the freeways grew in popularity, the streetcar system’s stock declined. Matt Anderson, transportation curator at The Henry Ford Museum in Dearborn, says 21 southeast Michigan lines were capable of carrying passengers between Detroit and Kalamazoo at the turn of the century, but by the mid-1950s, the lines were, counter intuitively, removed to alleviate congested roadways. Many allege local governments ordered their removal at the behest of the auto companies, though Anderson says there’s no evidence of a conspiracy.

Still, the demise is seen as a key development in pushing development out instead of up, thus maintaining Detroit’s low density. And that’s the appeal of the QLine – rail attracts dense development, and planners see this as an opportunity to generate some of the high-density growth that Detroit’s core could use.

“You get concentrated development in and around streetcar lines in a way that you don’t get with the bus system. Buses are more flexible in some ways, but they’re a disadvantage from a development perspective because you can’t count on them always being there,” Loh said.

Cox says the QLine is already having that impact because of that effect.

“We associate transit, for good reason, with density, walkability, and mixed-use development,” he says. “This changes the calculus for the arena district. It will mean higher density housing and development in Brush Park, and it will change the future development for all of Midtown and New Center.”

But residents and planners are eager to see the QLine grow into something more than just a development tool – they want it to effectively improve lives of those who can’t afford cars. That would ultimately turn it into a much more potent development catalyst. Rayman Mohamed, an urban planning professor at Wayne State, is undertaking a study to measure how the line improves the lives of those within a one-mile radius of the QLine. Like Loh, he said there’s already development linked to the rail, but he’s worried that the line will do little to do improve the lives of the lower income population, unless it expands.

Beyond the QLine, the state is also discussing converting underused Interstate 375 into a boulevard. It runs along downtown’s east side between Interstate 75 and the Detroit River. That could lead to more development through a corridor that was once a largely African-American neighborhood called the “Black Bottom.” That move would dramatically improve downtown’s east side, McKeag says.

“Nobody wants to live next to a freeway, and these are the type of places where you can have really strong addresses where people want to live. There’s a lot of land that could be recaptured and turned back over for redevelopment,” he says.

Cox notes that it’s no coincidence that the city and Michigan Department of Transportation are considering designs for an Interstate 375 boulevarding project at the same time that it’s considering rapid bus transit or a rail for East Jefferson and how to improve the downtown area’s walkability.

“We want to reconsider the damage that was done with the auto-centric focus in the ‘50s and ‘60s. It’s a national trend to evaluate the function of (the urban freeway),” Cox says.

The new boulevard coupled with an expanding QLine could present a different look for downtown Detroit, and the ideas represent new thinking in a city that seemed stuck in the past when it came to transportation.

“We’ve always been sort of anti-mass transit … for obvious reasons – we’re the Motor City,” Anderson said. “The QLine is a psychological announcement of a change in our thought pattern, sort of a way of saying Detroit sees that this is what it takes to be a modern, efficient city.”