The Wig Community Skatepark Was Not the End for Community Push 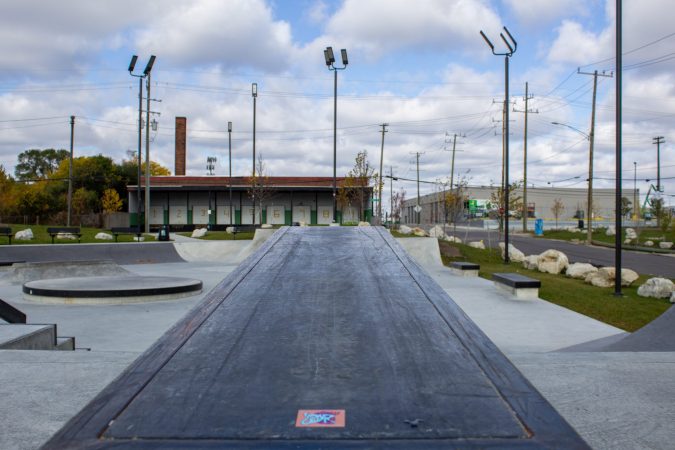 “Dear Midtown, The kids are coming for your street spots,” was the short message posted on Instagram to herald in the official end of The Wig Community Skatepark by the Detroit based community group, Community Push. The Skatepark, which had been open since 2014, long faced the threat of development at its location in Detroit’s Midtown, and after years of uncertainty, fate had finally caught up with them.

But, just as The Wig was not the beginning of Community Push’s efforts, it is clearly not the end. A flourishing skate culture with the eyes of the world on it, a slew of new programs, and some time with pro skater Tony Hawk are all indicators that good things are on the horizon for Detroit’s skating community. 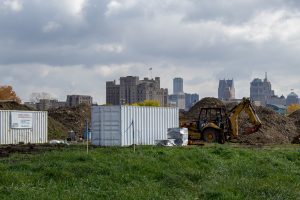 ALL THAT REMAINS OF THE WIG COMMUNITY SKATEPARK. PHOTO JOHN BOZICK

Derrick Dykas, longtime skater and founder of Community Push, doesn’t want the closing of The Wig to be the focus of the conversation. Instead, he wants skaters and the whole of Detroit to remember the good times and look to the future.

“With The Wig getting demolished it’s a casualty of war, we have brighter days ahead, and we’re going to get past it,” stated Dykas.

THE START OF THE WIG

The Wig, which opened in 2014, faced the threat of demolition for most of its existence, a fact that the group came to terms with and used as motivation in their journey to establish a permanent park in the city.

“It [The Wig] was a bandaid. We told ourselves we’re going to build this while we continue to work on getting a professional regional skatepark built, that was always the goal,” said Dykas. “Even before we started Community Push, I had a number of years working to get a skatepark built at Roosevelt Park in front of the train station.”

While eventually meeting this goal, it was not the train station that became the park’s home. Instead, the group found success through a partnership with the city when earlier this year, they assisted with the development of Riverside Skatepark in Southwest Detroit, just a short distance away from the original location in Roosevelt Park.

Leading the overall design and set-up efforts for the park, the group brought in Grindline Skateparks to complete the design after a chance meeting with the legendary Tony Hawk. Hawk, who owns a home in Detroit, invited Dykas and Community Push to his residence to talk skating after hearing about the group’s efforts.

“He moved in and wanted to help with stuff here,” said Dykas. “He heard what we were doing through the grapevine, and it went on from there.” 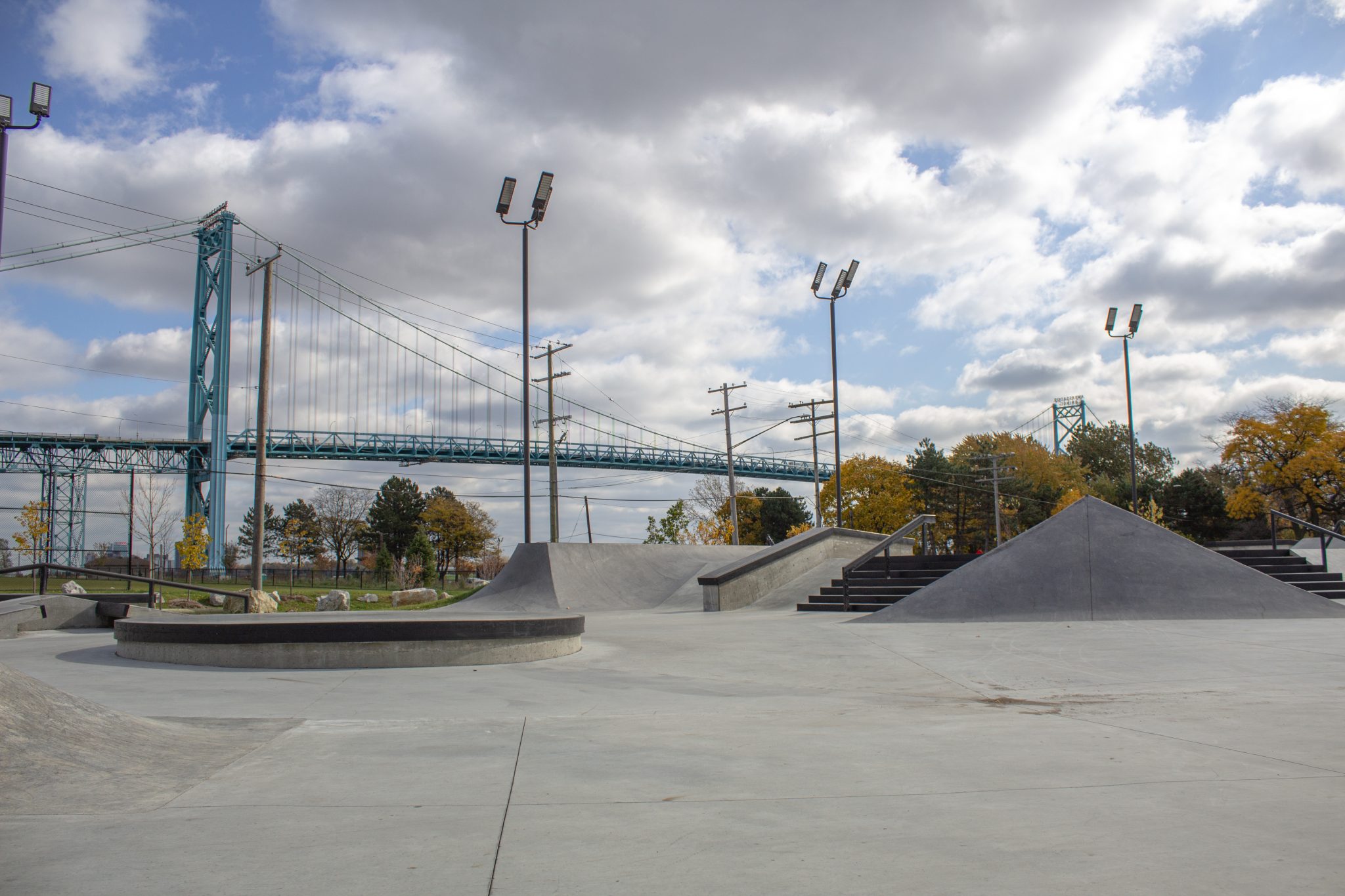 With Riverside successfully established before the closing of The Wig, the group was free to focus on its future and to assist with more physical projects and community outreach throughout the city. Dykas, who is now working with the Detroit Parks and Recreation Department, plans to launch a program called Honor Rollers in the spring. The program aims to encourage Detroit students to stay in school and get good grades and to use skateboarding as a way of reward.

COMMUNITY AND SKATING COME TOGETHER

“We are working with the recreation department, and we’re launching a youth program called Honor Rollers that we were going to launch in the Fall, but we didn’t want to get these kids excited about skateboarding for a few weeks and then have them hit winter and lose sight of it,” he stated.

The main issue that led to the pushing back of the program, according to Dykas, is the lack of proper indoor skating facilities in the city.

“There’s not accessible indoor facilities in the city, which I feel is the biggest problem we face as a skate community.” It’s something we’ve wanted to take care of, but we need a lot of money, and we need a lot of space to do this,” he stated. “We haven’t had the chance to line this up yet, but with The Wig gone and Riverside built, this is one of the few times in our short history where we don’t have any physical projects in front of us.” 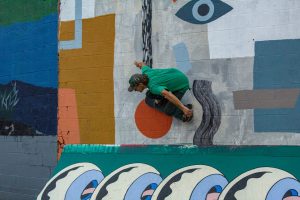 A SKATER IN EASTERN MARKET DURING A POP-UP EVENT PUT FORWARD BY COMMUNITY PUSH IN SEPTEMBER. PHOTO JOHN BOZICK

Some of the group’s future plans outside of the Honor Rollers program include establishing a community skatepark in Detroit’s Chandler Park and moving the Skatepark opened in Downtown Detroit by Quicken Loans and Tony Hawk to the Adams Butzel Recreation Complex on Detroit’s West Side.

So, despite the loss of The Wig, it’s safe to say that skating is far from gone in Detroit, in fact, it may be growing more than anywhere else in the world.

“The skate scene in the city of Detroit, I feel it’s one of the strongest in the country. Over the last 5-6 years, it’s been a destination for a lot of touring teams and a lot of professionals. It’s kind of uncovered now, but it was a diamond in the rough for the longest time,” said Dykas. “They’re not just coming to skate Riverside or The Wig, they’re hitting the street spots. That’s where skating was invented, and as many skateparks, as we build, it won’t stop street skating. It’s pushed people out of their comfort zones into other neighborhoods, and it’s lead to people exploring more, you don’t really get this in a lot of places.”

Overall, the group would not be where it was without help from the City of Detroit, and Dykas sees them as an essential component that helped to make Detroit a world-famous skating destination.

“The Wig, I never thought of it that way, but it was world-famous, people came from all over the world to see it, and its something I never thought I would have had a hand in. It’s all because of the city, they gave us the keys and backed off, they put trust in us,” said Dykas. “I talked to a lot of people in other cities who tried doing this, and certain personalities made it as hard as possible for them. So, I can’t thank the city enough for allowing us to do our thing.”