For the Last 20 Years, Every Halloween, Detroit Goes All Out. Founder John Dunivant Gives a Peak into His Creative Fantasies 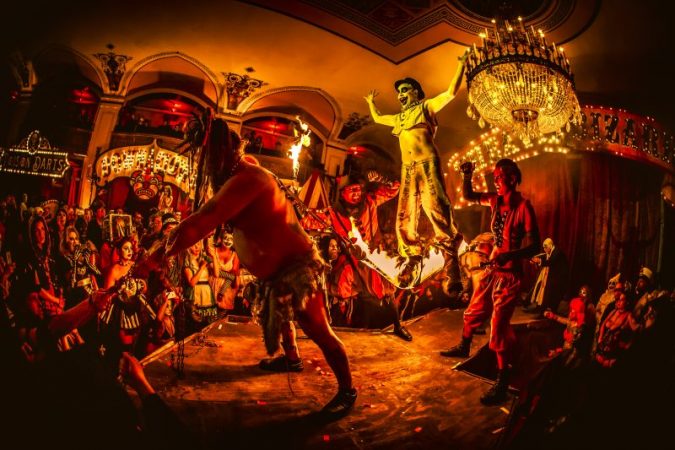 Before Theatre Bizarre became one of Detroit’s most elaborate celebrations it was one of its most talked-about secrets. Now, billed as the greatest masquerade party on earth, the immersive party was a DIY amusement park, taking place over a sprawling urban forest, replete with an immersive old western town and a cast of characters that includes punk clowns, burlesque dancers, and flamethrowers.

And, while the party wasn’t in theory legal, sitting somewhere in the gray area of old Detroit, everyone seemed to look the other way for years. The organizers publicly sold party tickets in advance. Usually from a theatrical display set up at the similarly DIY Cass Corridor Festival, Dally in the Alley, making Theatre Bizarre synonymous with Detroit’s rites of fall.

Securing tickets and planning a costume was a way to honor the changing of seasons as much as it was about Halloween. Theatre Bizzare sold hundreds of tickets to what was essentially an oversized block party.

The stages and many sets were permanent installations in a shared backyard, and over the years, the party’s organizers picked up houses (many blighted) and plots of land, inadvertently turning it into one of the city’s most vibrant, but lesser-known, art-based communities. To this day, many of Theatre Bizarre’s key players still live on the grounds: head stage manager, head of pyrotechnics, performers and members of the build crew.

This is now a movement, with its origins traced to one man, John Dunviant, who came to Detroit in 1989 to study at The Center for Creative Studies and never left. Theatre Bizarre started in his house before moving to his studio in the Russell Industrial and later to its infamous neighborhood location.

Dunviant was awarded a Kresge Fellowship in 2012.

We caught up with him to talk origin and inspiration.

CV Henriette: Have you always been into Halloween?

John Dunivant: Oh, yeah. Even as a little kid, there was such a fantastic sense of danger to it. I loved being able to make my own costumes. There was also the idea of being able to run around at night—magic lit jack o’ lanterns. I remember specifically there was this house where the woman was dressed as a witch paired with a smoke machine and a strobe light. It was all pretty simple, but that house scared the hell out of me. It felt like that house didn’t exist in the daylight or the rest of the year. 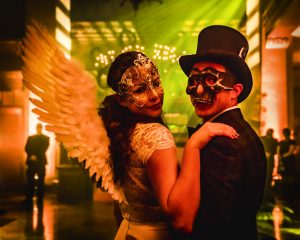 CVh: How has this experience of Halloween inspired other facets of your life?

JD: Definitely my art. I’m a painter and sculpture, and I’ll work in all different formats. Through Halloween, having to make and fabricate things, I learned all sorts of new ways to create. The DIY sensibility, I took to it right from the beginning.

CVh: You had a party in the Russell Industrial Center. Is that how it all got started? You were also one of the first people to be in that space, is that correct?

JD: Yes, one of the early artists. This was in the mid-‘90s. Back when it was mostly industrial, a lot of printing companies.

The parties actually started in my house. I built sets…I welded these thirteen foot gates that would wrap around the house, cast concrete tombstones that were sandblasted, that weighed three to five hundred pounds apiece.

But after a few years, the parties outgrew the space, so I moved them to a warehouse space.

One year it was a Stanley Kubrick inspired funeral where everything was very minimalistic and symmetrical, kinda stark. And then the next year there were areas behind the Russell, where they were cleaning out all this brush and trees.

We brought in close to 1,000 trees and filled this warehouse space with trees and leaves and created a forest, with a trail through the forest, and built a cabin in the center of it, and you could wander through the woods. This was on the fifth floor of the Russell.

That was the year I got in trouble, ’99. They [the landlords] said if I threw another party, they would kick me out. That was where I worked so I couldn’t do that.

The following year, a friend of mine who owned some property in Detroit had bonfires around Halloween. I’d come to help him out and he would come help me with mine. We had another group of friends throwing their own Halloween party.

Since I was being threatened with eviction, and we were all doing the same thing, I suggested we combine forces and work on one single event. And we did.

That year, 2000, was the first year of Theatre Bizarre.

The carnival theme was only supposed to be for one year, but there was so much more I wanted to do with it, and didn’t get to do, I thought it would be fun to stick with one theme and grow it.

CVh: This was near the State Fairgrounds, beyond a party, people lived there and started buying property. You created something pretty remarkable. Was it organic?

JD: Yeah, our group of friends was like family. We’d go vacation together. There’d be like one hundred of us, all camping together or doing these group projects. We were all living and playing together along the way. 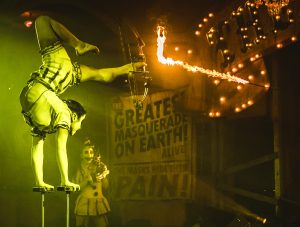 CVh: For those who aren’t familiar with the history, what are some of your favorite highlights from that period of the party?

JD: The best part was the lawlessness of it all. The fact that we knew we could get away with anything and we could build anything.

The possibilities were endless. We’d build it up for this event, but it was essentially our playground.

Being able to sleep on the roof of the mainstage, under the stars, with flamethrowers going off around us, throughout the summer, not just for the event, was amazing.

CVh: What’s the origin of the rollercoaster?

JD: Len Von Speedcult, a group of our friends, rockabilly welders. Len is a madman and a genius, and the one who designed the rollercoaster. I believe he drew it on a napkin, and fabricated the entire thing from scratch.

It has flame throwers on it. It’s called the roaster coaster. There used to be flames directed right at the car, so as you’re dropping through the tracks, and it’s spinning, flames are coming out at you.

One guy got too ambitious with the flame throwers and caught Len on fire, so he took those out.

CVh: You’ve been operating Theatre Bizarre for 20 years, and now, with the size of your party, you seem to be part of the popular culture. Is there a certain validation that comes with that?

JD: For sure. We set out to create something no one has ever seen before. I’ve always had that itch in the back of my head—that I want to be able to take things as far as I can. Experiences. Environments. Whatever.

We certainly set out to create something no one had ever seen before, heard of before, but a lot of it was for us. We were impressing each other.