Famed Avenue of Fashion clothing and streetwear boutique, Three Thirteen will be expanding its brand and opening a second location at 1436 Farmer St. in Parker’s Alley, within Bedrock’s portfolio in Downtown Detroit. The brand will join a growing shopping district downtown and a thriving community of neighboring small businesses as it plans an opening on a slated date of Monday, December 21. 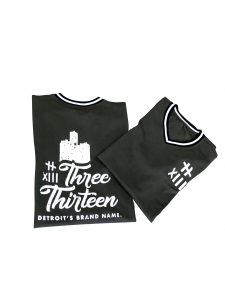 Clement ‘Fame’ Brown tells us in an interview “Three Thirteen is Detroit’s brand name for a reason. A big part of that reason is because we’re connected to community and we create what that culture looks like in Detroit. I’m super excited to bring that energy downtown to Parker’s Ally and the neighborhood and community it has.”

The boutique shop will feature specialty branded Three Thirteen t-shirts, crewnecks, jackets, jerseys, hats and gifting items including coffee mugs, pins, candles and body spray. Products from other niche brands will be featured on a rotating basis. At the launch, local brands such as Detroit Hustles Harder, Naturally Flyy Detroit and The Detroit Fresh Shop will be presented alongside products from national brands including Pro Standard and Sprayground. New to this location, Brown plans on carrying exclusive one-of-a-kind products designed by himself.

The long-time Detroiter and entrepreneur began selling air-brushed t-shirts as early as 12 years old. Sticking to his craft, Brown founded the Three Thirteen brand in 2008 and began selling apparel through word of mouth, pop-ups, and in select retailers. “The name Three Thirteen comes from rapping when I was younger 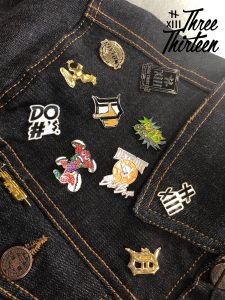 and trying to find different ways to say the same thing. I would always say, Three Thirteen instead of 313.” Brown tells us, which years later lead to Brown to brainstorm ways of making an authentic, Detroit brand that represented the vibe of the city organically. He wanted to come up with a name that would represent the positive people, places, and things in the city. “I had an aha moment, the lightbulb went off, and Three the name Thirteen was born.”

Brown reflected on opening the first shop in 2015, sharing “When you speak of the growth of Three Thirteen, it has been around for a long time. We beat the streets, we beat the pavements for six years until 2015 until we opened up its first store.” After opening his first shop in 2015, Brown moved Three Thirteen to the Livernois Avenue of Fashion in March of 2019. “That move was a big part of the development of the city and a historic location dedicated to retail. We definitely wanted to be there and it helped with the growth of the brand.” 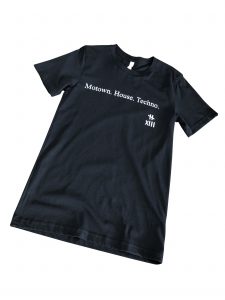 Fast forward to five years of growth and Three Thirteen is ready to expand its brand and customer base to another unique retail setting in Parker’s Alley. “Parker’s Alley is a special place in the city. It’s a unique little retail hub that we are super excited to be part of” says Brown. The idea of Three Thirteen was originally proposed as a temporary pop-up, but the brand was looking for something more permanent that it could call home.

The second location is reminiscent of how Brown kind of got Three Thirteen started, small and unique. Brown has decided to bring those smaller, custom items and items that come from one on one collaborations. He will be collaborating with his good friend, and local artisan city street artist, who will be making airbrush items that will be sold at Three Thirteen, adding uniqueness to the new location.

Parker’s Alley, located behind the Shinola Hotel, was designed with the goal of attracting small businesses to a downtown setting. Three Thirteen’s neighboring small businesses include The Lip Bar, Flowers for Dreams, DROUGHT, Good Neighbor, Huddle, and Madcap Coffee.